The crew over at Collider scored a cool clip from the upcoming TARANTINO XX: 8 FILM COLLECTION featuring RZA talking about asking Quentin Tarantino to be his teacher and mentor. We also have a full breakdown of the special features. Like I’ve said, there isn’t enough new shit here for me to fork over the cash since I already have all his films. However, if you don’t have his films or you only have a couple, now’s the fucking time to let loose and get the goods. Dig the clip and the skinny on the release below: 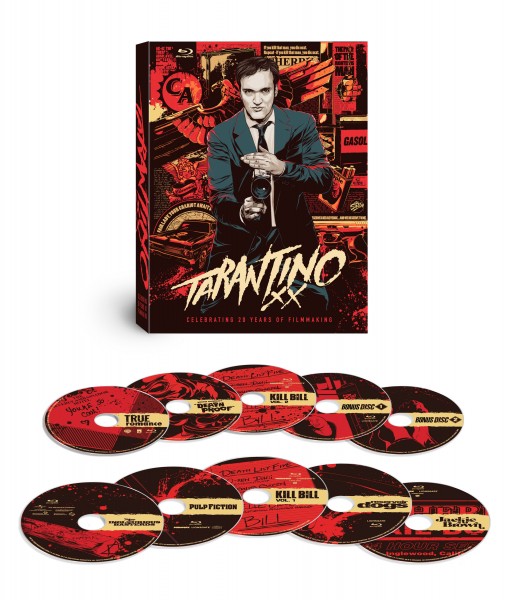 
Tarantino XX on Blu-ray also features striking, original artwork designed and illustrated by MONDO (www.mondotees.com). Housed in collectible packaging, the Tarantino XX: 8-Film Collection will be available for the suggested retail price of $119.99.

Critics Corner: The Films of Quentin Tarantino – In-depth critics’ discussion piece exploring Tarantino’s films that redefined cinema and the impact of one of the most influential writers/directors of our time.
20 Years of Filmmaking – Take a look at Tarantino’s career from the beginning, with interviews from co-workers, critics, stars and master filmmakers alike as well as a tribute to his greatest collaborator, Sally Menke.

Quentin Tarantino’s directorial debut, nominated for the Grand Jury Prize at the Sundance Film Festival (1992) and awarded the International Critics Award at the Toronto International Film Festival (1992), is raw, violent and unforgettable. Four perfect strangers are assembled to pull off the perfect crime, but when a botched robbery reveals a police informant among them, their simple robbery explodes into a bloody ambush.

Runaway lovers Clarence and Alabama (Christian Slater and Patricia Arquette) play a dangerous game with a stolen suitcase containing $5 million worth of cocaine. They head for Los Angeles, where they’ll sell the goods and begin a new life, but both sides of the law have other ideas. This dark comic web of crime, murder and mayhem from writer Quentin Tarantino and director Tony Scott (Top Gun, Spy Game), features an ensemble cast including Dennis Hopper, Val Kilmer, Gary Oldman, Brad Pitt, James Gandolfini and Christopher Walken.

Pulp Fiction has been hailed by critics and audiences worldwide as a film that redefined cinema. A burger-loving hit man (John Travolta), his philosophical partner (Samuel L. Jackson), a drug-addled gangster’s moll (Uma Thurman) and a washed-up boxer (Bruce Willis) converge in four tales of violence and redemption. The film was honored with an Academy Award® for Best Original Screenplay (1994) and earned seven total nominations, including Best Picture and Best Director. It has also been listed as one of the best films of all-time by Time and Entertainment Weekly.

Quentin Tarantino’s acclaimed adaptation of Elmore Leonard’s Rum Punch follows a cash-smuggling flight attendant (Pam Grier) who is busted by an ATF agent (Michael Keaton) and a cop (Michael Bowen). When pressured to help with their investigation, she agrees to do one last run for a ruthless arms dealer (Samuel L. Jackson). Mistrust and suspicions arise when Jackie plays the opposing forces against each other in an effort to walk away with the dough. Robert Forster earned a Best Supporting Actor Oscar® nomination for his role as Max Cherry, a bail bondsman who falls for Jackie and becomes embroiled in the scheme.

In the first volume of this gritty revenge saga, an assassin (Uma Thurman) is shot at the altar by her ruthless employer, Bill (David Carradine), and other members of his Deadly Vipers Assassination Squad. In this epic tale of survival The Bride sets out to bring justice to all those who wronged her, including a reformed suburban mother (Vivica A. Fox) and the Japanese Yakuza crime-lord (Lucy Liu).

Kurt Russell stars as a tough-talking, psychotic serial murderer who transforms his stunt car into an indestructible killing machine, then climbs behind the wheel to stalk and terrorize a group of women on the road. What he doesn’t realize is that he’s picked the wrong babes to mess with.

A Jewish cinema owner in Nazi-occupied Paris is forced to host a movie premiere for the Third Reich, where a radical group of American soldiers, The Basterds, led by Lt. Aldo Raine (Brad Pitt), plan to roll out a score-settling scheme. The film was honored with an Academy Award® for Best Performance by an Actor in a Supporting Role (2009, Christoph Waltz) and earned seven total nominations, including Best Motion Picture of the Year for Lawrence Bender and Best Writing, Original Screenplay for Quentin Tarantino.