I love genre cinema. I will always have a soft spot for horror, action, sci-fi, and all the subgenres that exist inside those larger categories. What I have never felt any real connection to are those films that exist in the realm of pure sleaze. You know the ones: the films from the ’70s and ’80s, filled with ugly violence and sex that is the opposite of titillating, usually shot on cheap film stock with semi-amateur casts. But knowing these films have a large following and several companies devoted to restoring them makes me wonder what I am missing. With that in mind, I am going to do a deep dive into the world of sleazy exploitation. This is My Exploitation Education. This week’s entry is THE NESTING.

There is a strange sense of restraint to THE NESTING that is honestly more interesting than the actual story or characters. The plot of the film is a fairly disposable haunted house/mystery set up that takes its sweet time getting around to what is easily guessed by the middle of the second act, but the tone of the film falls somewhere between a creaky old network TV movie and a ridiculous grindhouse aesthetic with grotesque villains and random (barely motivated) female nudity. It’s a film that wants to be classy and trashy at the same time, but cannot make up its mind what to be when forced to choose one or the other.

Lauren (Robin Groves) is a successful novelist living in New York City. Her latest bestseller is entitled “The Nesting” and features an illustrated cover with a young woman looking frightened in front of a gothic house in the country. Lauren also suffers from agoraphobia that causes her to have panic attacks when she leaves her apartment. In an attempted cure, she makes the abrupt decision to move out of the city for a while and work on her new book. With her firmly friend-zoned, would-be suitor Mark (Christopher Loomis) along for help (and to spout a stream of what would later come to be known as “dad jokes”), she goes searching for a rental property in a small town in upstate New York. 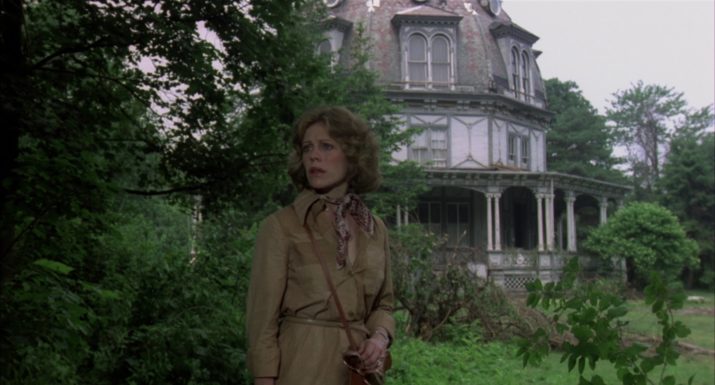 What Lauren finds is a house that looks exactly like the one on the cover of her novel. It is run down and comes with the added bonus of mysterious shadows walking by windows and lit cigarettes appearing and then disappearing in ashtrays. Any normal person would get the hell out of town, but Lauren takes it all as a sign and rents it on the spot from its elderly owner, Colonel LeBrun (John Carradine). Of course, in yet another sign that maybe it’s a bad idea to stick around, LeBrun yells in fright when he sees Lauren and has a heart attack. And this is before we even get around to Frank (Bill Rowley), the surly local handyman who starts antagonizing Lauren.

Could Frank and LeBrun have something to do with the violent history of the house hinted at in the movie’s cold open? Does Lauren have a past connection to the house that she never realized? Will a tepid love triangle develop between Lauren, Mark, and Daniel (Michael David Lally), LeBrun’s physicist grandson who struts around wearing shirts with the top four buttons undone? If you don’t know the answers to these questions, you have probably never seen a movie and might actually find some surprising beats in THE NESTING. 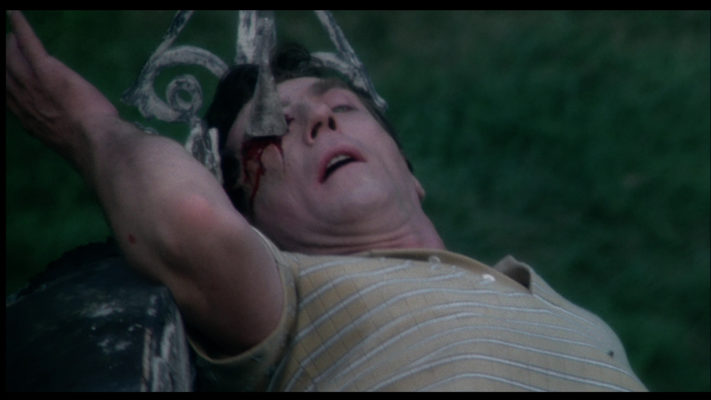 Co-writer/director Armand Weston seems interested in presenting the film as a gothic melodrama with occasional stabs at graphic horror, but it lacks the heat to work as the former and is too tame to satisfy gorehound fans of the latter. If not for two nutty sequences in the second act where the true villains reveal themselves in all their slovenly, mouth-breathing, stereotypical redneck glory, THE NESTING would be almost completely lifeless.

The cast at least shows up to play. Groves is solid, capably swinging back and forth between sarcastic annoyance with Frank and near-hysteria at the supernatural events. Loomis looks and behaves like a cross between character actors Charles Hallahan and Richard Kind—which is a surprisingly winning combination. Carradine overacts his one big scene with aplomb. And Gloria Grahame pops up as a ghost to lend a little old Hollywood class to the proceedings. 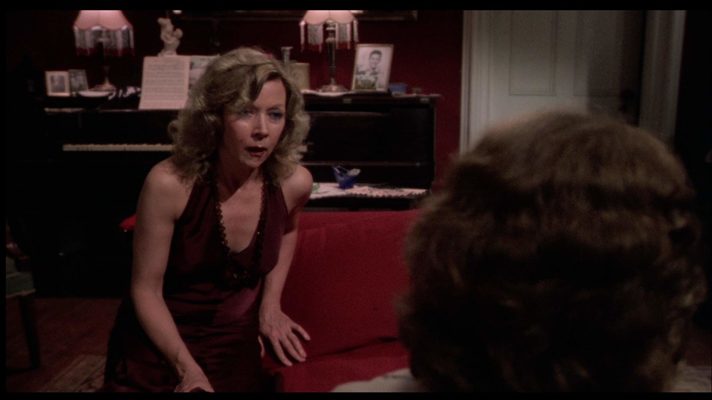 Usually when a film is as largely lacking in energy as THE NESTING is, it is a failing on the part of the actors to bring life to their roles. Since that is not the case here, the blame has to fall squarely on the lackluster script and Weston’s insistence on pulling back from the trashier moments. There are three potential showstopper set pieces in the film. Only one of them lives up to their potential, encompassing a slobbering madman, a car chase, and ending with a character taking a hand scythe to the face. The other potentially fun bits are hamstrung by sloppy direction and egregious overuse of slow motion.

I hate to sound so negative when talking about the film, but it is frustrating because there is a decent amount of potential that is wasted. Sure, the premise is familiar, but it is still a sturdy framework that could have been used to support a fun, over-the-top gothic melodrama. Weston had the cast in place and the apparent understanding of what the audience wanted, but he never let the film far enough off the leash to go to the absurd places it should. Too much restraint is never good for an exploitation film. Look no further than THE NESTING for proof of that. 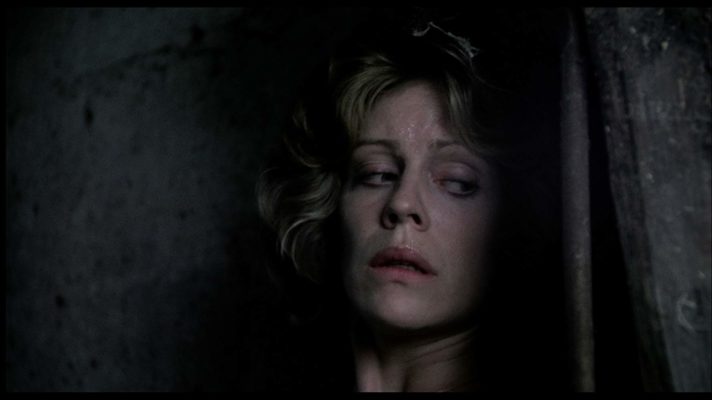