Don’t be fooled by BLOOD SOAKED‘s goofy advertising campaign stressing its mix of “Lesbians v. Nazis v. Zombies in an All Out War!”; this is a nasty little piece of unpleasantness that is quite clearly designed to be a straight shot of shock cinema right to its audiences’ gut, but gets unfortunately distracted by the shoehorning of exploitation elements into its final act. Expanded from director Peter Grendle’s 2008 short film THIS SIDE OF NIGHTMARE, this version fits plenty of disturbing imagery into its frantic 72 minutes, but runs out of steam before its.. uh.. blood soaked ending.

The film makes its intentions known right from the opening credits, which fits some ultra bad-taste holocaust footage into its stylish montage of Nazi soldiers and swastikas. We’re soon introduced to the sweetly naive Piper (Heather Wilder), a college freshman who quickly forms a friendship with the seductive Ashley (Rachel Corona). These sequences more closely resemble a college sex comedy than a horror film, and kudos to Grendle for having the patience to let them play out. After a night of passion, the two are driving home when they are accosted by the vicious, desert-dwelling neo-nazis Katie and Sadie (Hayley Derryberry and Laina Grendle), who proceed to viciously attack Piper and chain her up in their underground bunker. Oh, and did I mention that Katie and Sadie’s father was a scientist who was working on creating a zombie Fourth Reich to take over the world? Soon Piper is battling for her life against an army of the dead and the two psycho sisters. 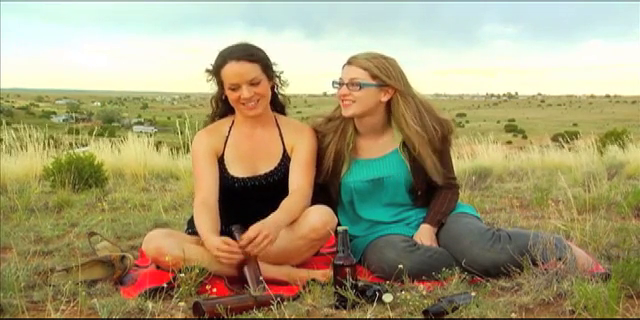 While tonally all over the place, BLOOD SOAKED manages to squeeze some legitimate tension out of its torture-heavy first half, thanks to some effective character development and sympathetic performances from Wilder and Corona. There’s a real sweetness to their relationship, which makes the immediate viciousness of Katie and Sadie’s arrival all the more dramatic. Spewing homophobic slurs, the two are presented as pure evil, and the deranged performances aid in the unpredictable nature of their presence. It’s rather unfortunate that these effective elements are diluted by the inclusion of the gonzo Grindhouse zombie subplot, which turns much of the effective menace of the film’s first half into an unfortunate farce. It does make for some impressive bloodletting in the film’s gory climax, but it still feels like a wasted opportunity when the set-up is this impressive.

Also hurting things is the choice to switch to murky black & white photography after the initial attack by Katie and Sadie. The stylistic decision adds very little, and in fact becomes distracting when the film begins to focus more heavily on extreme violence. Perhaps the B&W is supposed to mark the point where the more exploitative elements get introduced, but it serves mostly as a distancing mechanism that dulls the edge of the material. It’s especially unfortunate since the photography up to that point was quite impressive, with Grendle (and cinematographer Tyler King) making great use of the desert locations. 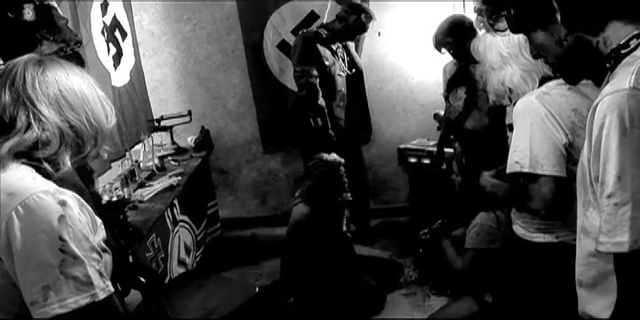 A film that never seems quite sure what it wants to be, BLOOD SOAKED works best when it remains focused on its Naziploitation origins, but loses steam when it abandons its inspired torment for more pulpy terrain. With a fascinating set-up and some incredibly effective – and quite extreme – moments of violence, the film had the potential to be something quite impressive. As is, it’s a mixed bag, with strong performances melding with some erratic pacing and startling tonal shifts.