Home  ⁄  The Wire  ⁄  Little Miss Risk gets Literary with a look at David Flint’s SHEER FILTH! 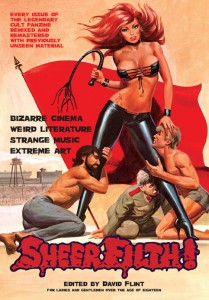 Once upon a time, when I was much younger and impetuous, I frequented downtown Vancouver’s Granville street. In those days it was hanging between the glory of being ‘Theatre Row’ to what it more or less is now, which is akin to an open air shopping mall. Where jack shacks and small independent shops selling stickers, band patches, nag champa incense, posters and alternative clothes once were now stand American Apparel, Claire’s and a host of other shitty franchises that can be found anywhere. But in those magical days for an outcast teen in ripped fishnets, Doc Marten boots and too much eyeliner, it was a link to the underground. This was before the Internet was available in your hand and in your home via dial up. In those days, the jungle drums came in zones, from high production printed matter to words cranked out from a photocopier. Through these mediums kindred souls found each other, shared music, a love of uncommon films and the art of pin ups. Now, this information is more readily accessible, but the thrill of the hunt has since diminished with more paper free options out there.

However, there was one zine from the UK, Sheer Filth, which was a mainstay, even this far over on the West Coast, where I still call home. I don’t know whether it was because of the whole Commonwealth thing, or just because these shops knew a damn good thing when they saw it, but I remember issues of Sheer Filth coming into my eager adolescent paws. Writings about Bettie Page, Jayne Mansfield and other 50s/60s British pin ups I’d never heard of before sprang before me. Articles about gatherings to view strange and hard-to-find exploitation films filled my young skull with longing to be old enough to attend screenings of such things in Vancouver. I began seeking out anything and everything to do with the subculture. This spoke to me, and as a student of a fine arts high school, it came out in my art, much to the consternation of my educators (which, frankly if the Italian Masters could paint a dick and tits, I failed to see why *I* wasn’t allowed to, but I digress) 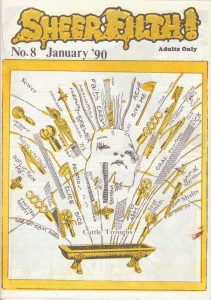 Recently, David Flint has released a complete collection of Sheer Filth through FAB press. It’s wonderful. A throwback to those formative years, and a chance to read all the articles from the issues I missed or never got to see. It was like seeing old friends again. For anyone with ANY interest in pulp books, exploitation films, strange art, video nasties, or even to get a sense of that time when subculture was harder to find – not just a Google search away – will be interested in this book. In fact, as a lover of all things Grindhouse, perverted and subversive, I encourage this as required reading. The collection of articles on rare books and writings has even inspired me to seek these treasures out for myself. But rather than scour Ebay, I prefer to keep a list in my wallet tucked where a credit card would be in other people’s wallets, and when I happen into a used book shop, see if I can successfully hunt down any of these titles.

Reading these pieces also reminded me of my roots in the underground, of why the mainstream has never thrilled me. There’s no challenge to sharing what’s easily accessible. By the time most pop culture references are realized they’ve been watered down and diluted. The art that inspired them being drained of anything of interest to be over-processed in order to be fed to the masses. But between these pages is an education to be had, a fire to be sparked. Something of a reference guide for the next generation of children who don’t want Hollywood reboots and are discovering Russ Meyer flicks for the first time. This book is an important fixture in our collective consciousness, and to hear someone reference something from it will be like someone offering you a handshake in a Low Brow secret handshake that I’ll be happy to return.