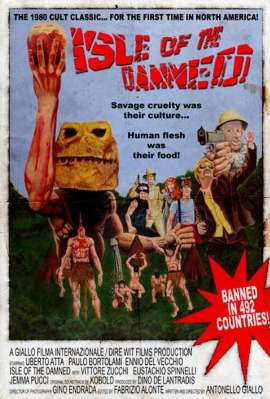 Production values are expensive, but blood is cheap. Really cheap. A bit of food coloring and corn syrup and you’ve got plenty to go around. On the set of Rock, Paper, Scissors: The Fall of the Original Six, this sugary blood substitute became a constant albatross around our necks – sticking our fingers together, ruining our clothes, and leading to constant attacks by bees, hornets and other flying insects. And while the efforts were not always worth it, there’s something purely visceral about seeing our insides on the outside; something that commands your attention. Sure, it means having to attempt to digitally remove dozens of swarming wasps in your climactic action scene, but wasn’t that face full of blood magnificent?

During this particular shot I was crouched just out of frame with a plastic tube, ready to give it the necessary airflow as soon as someone said the word. How glamorous! But great cinema is not built upon blood alone. You also need.. cannibals!

A close cousin to zombie films, and relative to the 60s Mondo “documentaries” and wilderness survival films, the Italian Cannibal film is a particularly baffling genre.  Perhaps this is because that cannibal films never crossed over into the mainstream the way that a Dawn Of The Dead or a 28 Days Later have allowed the zombie genre to, and they never led to the level of slavish devotion from fandom, since even the most notable film – likely Ruggero Deodato’s Cannibal Holocaust – can only negligibly be referred to as a quality film. Thankfully, we live in the age where a group of motivated individuals on a small budget can create a comedy tribute to an unfortunately derided, and often ignored, genre. Isle Of The Damned is presented as an actual product of the early 80s, directed by the mysterious Italian Antonello Giallo and banned in (as the poster screams) 492 countries! In reality, it’s the folks at Dire Wit Films who have crafted the film: part parody, part excuse for general silliness, but all with tongue firmly in cheek. While the success rate of the humor is mixed, the very fact that such a film exists – and has been put together with such an obvious love for the genre – has to be considered a massive accomplishment.

P.I. Jack Steele (Larry Gamber) is, along with his adopted son Billy (Peter Crates), helping the devious asshole explorer Harold Thompson (Patrician Rosa) track down the lost treasure of Marco Polo in Argentina. The final stage of their trip takes them to a (not quite) deserted island filled with the Cannibal Yamma Yamma tribe, who nearly immediately proceed to chow down on the crew in a variety of gruesome ways before the three are rescued by the mysterious Alexis Kincaid, an anthropologist with a hidden past. Kincaid has (somehow) built a mansion on the island where he’s assisted by his man-servant Cain, and suggests the explorers vacate the island before they become it becomes their grave. Naturally, the villainous Thompson refuses to leave without the treasure, leading to a gory finale where the cannibals dish out punishment to those that remain.

Shot on digital video, the Dire Wit crew have added various bits of grain and film damage to make Isle Of The Damned look appropriately aged, and the opening credits – featuring a plethora of (fake) Italian names and a funky, synthy main theme – works well to capture the look of the films being aped. The actual characters, however, wear ridiculous fake mustaches and wigs, and feature – in tribute to the bad dubbing of most Italian genre films – ridiculous, often inappropriate voices. The dubbing gag gets a bit tiresome after a while (except for the Ewok sounds that come from the tribe members) and the rather broad humor – with its reliance on sodomy, rape, and poop jokes – doesn’t always work, but there’s an obvious attempt to gain appreciation outside of the small audience that enjoys cannibal films, and that’s understandable. A bit more subtlety would be nice, but it’s not like the genre being aped was ever known for being tasteful.

It’s no surprise that a film about people being eaten would be pretty violent, and there’s plenty of inventive – and thankfully not too realistic – gore to go around, most notably a nasty scene of a fetus being cut from a woman’s stomach and a penis severing (and eating!) that might still make a few folks squirm. There’s also lots of folks’ insides being pulled outside, as well as other various scenes of debauchery. There’s some brief nudity, and some rather ridiculous sex scenes – consensual and otherwise – but it’s the gore that – rightfully – takes center stage.

Acting quality is a little difficult to judge, as the performers are obviously doing their best to over-act, gesticulating wildly to go along with the dubbing. The dubbed voices are appropriately stilted and, in the case of Jack, totally inappropriate for the actor being replaced – and you wouldn’t want it any other way. Thankfully there are no direct references to the real animal violence which often goes hand in hand with the genre, though there are some great scenes of exotic animals, obviously filmed elsewhere, edited into the exploits – as well as perhaps the (intentionally) least convincing spider in cinema history.

I also want to make a mention of the terrific soundtrack, available for free on the DVD in mp3 format, which appropriately emulates the synthesizer and prog-rock fueled scores of Italian zombie, giallo and cannibal films. Music often gets the least attention on low-budget productions, usually composed of random available rock songs or public domain numbers, so it’s nice to see a nice variety that supports the action rather than distracts from it.

In the wake of Tarantino/Rodriguez’s Grindhouse there have been a plethora of tributes to the exploitation films of the 70s and 80s with varying degrees of success. In an interview coming to Daily Grindhouse on Wednesday, Director Mark Colegrove told me they were half-way through the three year(!) creation of Isle of the Damned when Grindhouse was released, so don’t mistake this as something looking to ride the coat-tails of the revived love for trash. This is the work of people with an obvious love for the genre, who also felt like making something sublimely ridiculous – with the hope that the audience will be out there to enjoy it.

Sometimes you can tell just from watching a film that it was an absolute blast to make, and thankfully in the case of Isle of the Damned that energy and sense of fun can be felt throughout. Far from restrained, the film wallows gleefully in its bad taste and remains an amusing, often inspired spoof of the cannibal genre that has plenty to enjoy for patient fans of exploitation.

Two Nightmares out of Five