MOE GETS HIT IN THE ROWSDOWER BY

AIP – makers of so many movies it’s actually hard to keep track of them all.My motto for AIP has always been “AIP – A Sign of Quantity”. I’m not saying this is a bad thing, well maybe I am, but bad being a good thing in this case. It’s a pretty well-known fact I enjoy terrible movies. Something that started as a love affair with Mystery Science Theater 3000 I’m sure. I soon found myself hunting down these movies without Joel/mike and the bots. Now I’m at a point in my life where I can honestly say I’ve seen more MST3K movies WITHOUT the MST3K treatment than with. A good chunk of these are AIP films and that is why AIP will forever hold a place in my blackened stone cold heart. Speaking of MST3K… 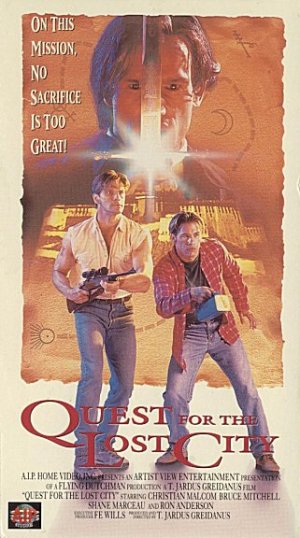 Quest for the Lost City (QFTLC)or as it was known when done by the bots The Final Sacrifice, is perhaps the film I’ve seen done without the joking around the most. This was my fourth viewing and I’ve only seen the MST3K version once. It’s Canuxploitation at its finest, earlier today I was even saying the face of Bruce J Mitchell should be on the Canadian flag. If you’ve seen The Final Sacrifice you’d know why!

QFTLC follows the story of an utterly obnoxious little twit named Troy who, in a Goonies like twist of fate, discovers a map belonging to his dead father in the attic and decides to go on an adventure to find this lost city. For some reason, never explained to us, a cult of ancient Native American worshiping hooded idiots who all look like The Mentors with much less personality find him and try to steal the map. This is a huge issue with me, Troy didn’t do ANYTHING to tip them off that he had the map. THEY JUST KNEW! I have a very hard time getting past that, I understand they wanted to get on with the film, but they could have added 3 extra minutes of footage to show them playing on a Ouija board or something! So Troy takes off on his 10 speed and eventually finds himself in the back of a bemulleted surly mustachioed drunkard’s pickup truck. Now I hope you’re paying attention because I don’t want you to miss this, VERY CANADIAN, gentleman’s name…are you ready? 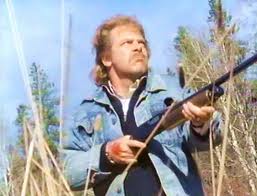 Say it a couple times to yourself, it’s a lot of fun and the way the villain says his name will have you in stitches. Rowsdower spends the entire film one denim button up shirt away from a Canadian tuxedo and always has a beer in his hand. He shouts almost all of his lines and when he doesn’t shout them it’s almost disconcerting! Now if you were paying attention during the prologue of the film you’d remember Rowsdower as the man who successfully escaped the evil cult 7 years previous (though manages to look exactly the same).

Together Troy and Zap manage to follow the clues to the lost city, Troy gets kidnapped and Zap rides a horse to save him, poor horse. Not a whole lot happens in the movie; Zap gets thrown down a hill, they meet a crazy beardo who turns out knew Troy’s dad, Zap kicks a man in the balls and it does NOTHING. The only real interesting fight scene in the film has Zap and the cult leader (who looks like he tried out for and was rejected by My Chemical Romance) battling it out with a torch vs. a grappling hook! They eventually find the lost city, but never actually go explore it (it’s hard to go and explore a miniature) they just drive off into the sunset and the credits roll. Canadians are silly.

QFTLC is a fun MST3K, so if you don’t want to endure this steamy pile go watch that one. I’m a sick fuck, so I kinda enjoyed suffering through this brain aneurysm on magnetic tape for a fourth time. Call me sick…no do it, oh god yes, call me sick again, stroke my hair, just like that, yes right there! Mmmm was that good for you? No? That’s what I get for asking…