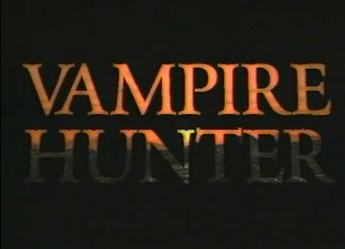 Well, here’s something a bit different. While on the surface Sean Gallimore’s VAMPIRE HUNTER appears to be a particularly cheap knock-off of any number of late-90s vampire properties – from BLADE to BUFFY THE VAMPIRE SLAYER – it was originally lensed all the way back in 1995 (though not completed and released for nearly a decade). But what really sets this movie apart isn’t its prescience, it’s Gallimore himself who might be the only martial artist/actor/director/writer/cheesecake nudie artist/animator that we’re likely to ever see in ultra low-budget cinema. This was obviously a labor of love (and extreme geekiness) for Gallimore, and what its missing in technical aptitude (which is a LOT), it makes up for in enthusiasm and a commitment to ridiculousness.

Gallimore stars as John O’Ryan, a bad-ass former marine who trained in martial arts in Japan, but now spends his days surrounded by super-hero action figures selling the sort of art you see on the cover of Heavy Metal magazine. We’re introduced to Sean as he demonstrates his abilities with a variety of weapons (including a particularly impressive nunchuku display) in his garage, which has everything from swords to throwing stars mounted on the wall. O’Ryan’s wife books him a meeting with a local gallery owner, the mysterious Ramone (Frank Suarez) who immediately rubs Sean the wrong way by hitting on his girl, before he’s attacked by vampire hunter Morgan Bane (Leonardo Millán) sporting a super-soaker full of holy water. Returning to the gallery to track down a misplaced portfolio, Sean is attacked by one of Ramone’s many frumpy mid-90s looking vampires which makes him suspect that something supernatural may be afoot. After his wife is kidnapped by Ramone, it’s up to Sean to team up with Bane to take down these tie-died, mom-jeans wearing creatures of the night. This involves a lot of kicking, punching and crossbows, as you might expect. 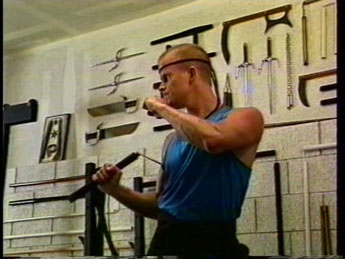 To have any hope of enjoying VAMPIRE HUNTER, you’re going to have to ignore some pretty glaring flaws right off the bat. For one, the whole thing was shot on video – not a rarity in our low-budget explorations – but it’s particularly poor looking due to its age and obviously being transferred from a VHS tape (there are tracking issues and a big purple mark that goes along the right side of the screen). Even worse are some serious sound issues which persist through most of the film, the audio sometimes being totally unintelligible – particularly in the early scenes – which can be a bit tough to tolerate. To give up at this point would be a bit of a shame, however, as a patient viewer can find a lot to enjoy in this ultra low-budget action/horror flick.

Gallimore is bland but perfectly fine in the lead, but the rest of the cast – particularly Frank Suarez as the vampire leader – stumble a bit. The vampire minions (many of whom dress exactly like you would expect people in 1995 to dress) are forgettable, but do manage to get their butts kicked convincingly, which I suppose is most of the reason they are there in the first place. Even considering the low standards of shot-on-video vampire movies (and I’ve seen my share) the performances are pretty dire – and certainly not helped by the technical issues. 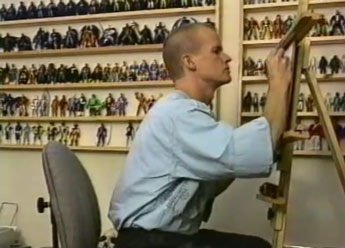 The film’s greatest asset is obviously Gallimore himself, since no technical limitations can hide the fact that he’s a very skilled martial artist, and as an exhibition of his impressive abilities the film succeeds. Aside from his own physicality, he also does a strong job on the fight choreography and the direction of the action scenes. Don’t expect Shaw Brothers level (or, heck, even Godfrey Ho) fights here, but it generally looks fairly smooth and makes great use out of a wide variety of available weapons. A big step up from most of the “action” scenes featured in no-budget productions. You’ll still see the occasional punch or kick miss by a foot, but some obvious time was spent putting these scenes together and it pays off.

Gallimore is also obviously a genre fan, and there’s a lightness to the proceedings which helps ease through the rockier acting moments, including a classic “gearing up for battle” montage that could have been ripped right out of a mid-80s action film. Special effects focus mostly on various projectiles embedding in the cast, but they look fine and – unlike SUBURBAN SASQUATCH – ambitious (awful) special effects don’t become a distraction. 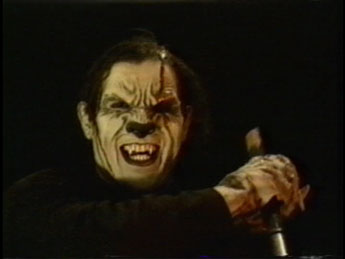 Rampant technical problems and a generic plot make for a sometimes tough watch, but some impressive action and a strong lead performance (as well as a 71 minute runtime) reward those who stick with VAMPIRE HUNTER. Gallimore may be more Jeff Speakman than Jackie Chan, but the passion for what he’s doing (and his impressive abilities) help the film overcome its limitations to become surprisingly entertaining. Shaky, but definitely fun. Check out the full film embedded below and see if you agree.