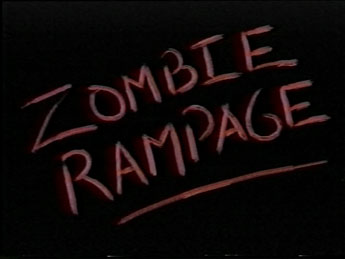 During a recent viewing of Bruce McDonald’s PONTYPOOL, I began to ponder just how oddly versatile the zombie film genre has become. Despite some serious over-saturation, talented filmmakers still manage to wring out new and interesting perspectives on the shuffling dead in a variety of different artistic mediums. Now that we’re inundated with successful mainstream films, books and even television series’, it’s hard to believe that it wasn’t too long ago that fans had to resort to somewhat less polished efforts to get their zombie fix. And, yes, sometimes that means dipping into works of auteur director Todd Sheets, the low budget maestro who also brought us NIGHTMARE ASYLUM and SORORITY BABES IN THE DANCE-A-THON OF DEATH. By 1989 the bloom was off the zombie rose, coming before Tom Savini’s remake of NIGHT OF THE LIVING DEAD or Peter Jackson’s BRAINDEAD (aka DEAD/ALIVE), so Sheets – obviously a massive fan of the genre – decided to get some friends, some camcorders and some animal entrails together and put on a show. The result was ZOMBIE RAMPAGE, which swings wildly between incoherent and amateurish, but its sheer ambition (and devotion to gut-munching) makes it a massive improvement on Sheets later films. At least, the ones I’ve seen.

Two gangs from the mean street of Kansas City – one led by Sheets himself – have an old fashioned brawl (with a rock cover of “Spirit In the Sky” in the background) that leaves a few members dead. Upset, one of the gang leaders gets an occult paperback book that is said to bring the dead back to life, though the other gang manages to get the same book and – after a particularly windy reading of incantations – creates the titular zombie rampage. The gang members are quickly consumed, leaving the leader (and king asshole) Tommy (Dave Byerly) to hole up at a bar, alongside the young, mulleted Dave (Erin Kehr) and his girlfriend. There’s also a big dopey serial killer roaming around for some reason. Soon they are all overwhelmed by zombies of various quality – from halloween fun mask, to gooey burn victim – and the constantly bickering Tommy and Dave (along with their girlfriends) attempt to escape down an elevator shaft.

And then there are a couple of shots of zombies, and the whole thing ends. Huh. How about that. 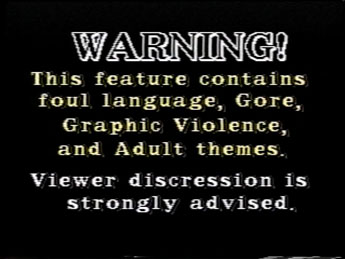 I feel like I’m repeating myself by mentioning that ZOMBIE RAMPAGE is a total amateur effort, featuring consistently terrible acting, special effects, writing and direction. I suspected – based on Sheets other efforts – that this would be the case going in, but this movie has some unique quirks that are particularly baffling. For one, the transition between the gang’s efforts to raise the dead and the panic that leads to the characters attempting to seal themselves in a bar is totally nonexistent. There appears to be at least five minutes of exposition that is totally missing, and characters who seemed absolutely fine one minute, are suddenly (and incompetently) attempting to seal up doors and windows the next. Then things just get strange, as we’re shown some random guy getting bitten outside a church(?) and a young man and woman attempting to nurse his wound, another couple attempting to hide in some sort of boiler room, and of course there’s the serial killer subplot which is a real head scratcher.

And then there’s the ending. I actually went back and watched it a second time to see if I may have missed some sort of event that would trigger the closing credits. Maybe the characters slipped into the elevator shaft? Maybe they were suddenly overrun by zombies? All we get is the voice-over from the ending of Lucio Fulci’s ZOMBIE implying that the city is overrun, but the characters get absolutely no visual resolution. There’s some evidence that there is a ZOMBIE RAMPAGE 2 out there, but that still doesn’t explain why things fizzle so entirely here. Needless to say, what is already a confusing film is saddled with a particularly unsatisfying ending. 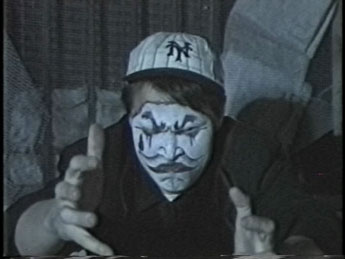 But let’s look on the bright side. First, this isn’t nearly as awful as NIGHTMARE ASYLUM. The acting is a smidge better, and while characters still constantly shout unintelligible dialogue over each other, at least the first twenty minutes seems to make some sort of sense. The music is also much better than in the other Sheets films I’ve seen, no longer relying on public domain classical music and instead featuring a mix of rock songs and dated synthy stuff – as well as some more recognizable genre thefts (most notably from Fabio Frizzi’s score to THE BEYOND). There’s also plenty of guts to go around if you’re into that sort of thing, though the special effects are inconsistent – the knife used by the serial killer has obviously been cut off, and most scenes of cannibalism are just a pile of entrails laying on someone’s stomach.

I also can’t help but note two particularly ridiculous moments. First, there’s a scene where a woman is pushing a baby carriage through a street at a comically late hour before being attacked by zombies. I give Sheets some bad-taste credit for also having the ghouls tear her baby – which is obviously just a children’s doll – to bits, An inspired bit of sickness. Second, one random character decides to blow his own brains out, which leads to a delightfully extended sequence that – despite the sorrowful music in the background – is absolutely impossible to take seriously. Needless to say, if you guessed that a slew of brains end up coating the wall, you would be correct. 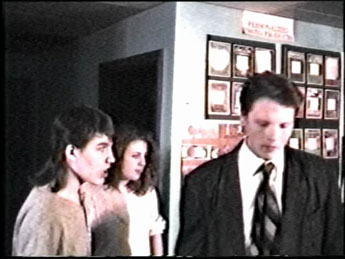 Perhaps I’m growing more fond of Todd Sheets’ work, or perhaps my expectations have just shifted appropriately, but ZOMBIE RAMPAGE isn’t nearly as offensively awful as I was expecting. It’s still wholly nonsensical – and a frustrating experience for those not used to the limitations of no-budget films – but in all it’s fairly painless, and would have delivered the goods for a zombie-crazed 14 year old version of myself. Strangely, it seems like Sheets’ work actually regressed after this film, as this is the best of his efforts that I’ve seen. Still, this gives me hope as we continue to explore his oeuvre.