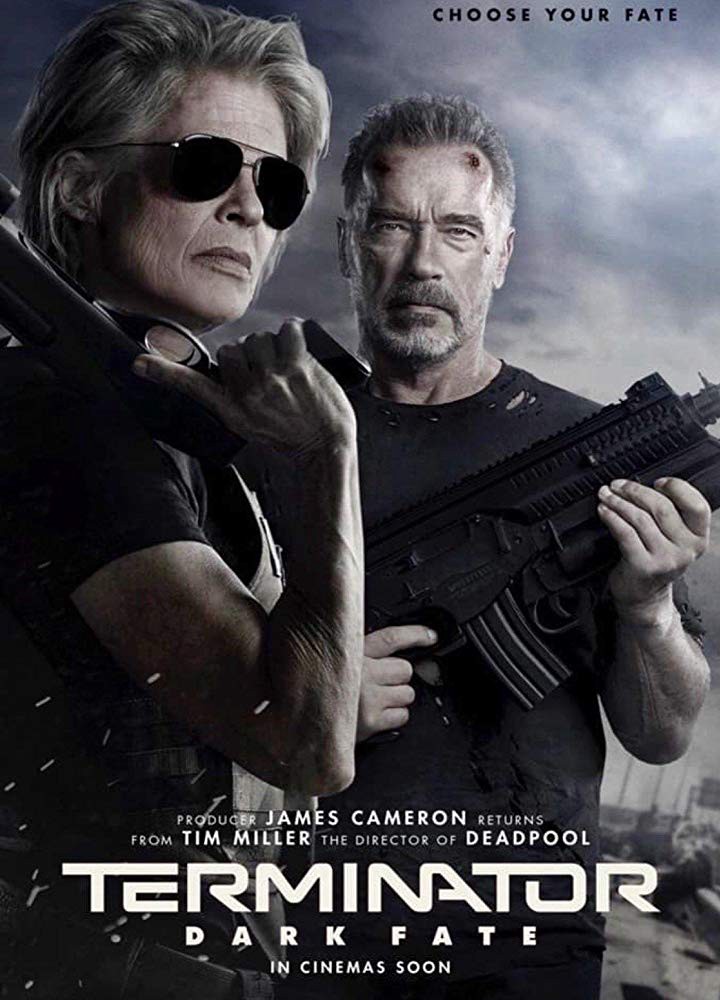 [Contains spoilers for the TERMINATOR series.]

Following the first round of advanced screenings for TERMINATOR: DARK FATE, there were, understandably, mixed opinions, though all of them echoed one general reaction: it was “the best TERMINATOR sequel since TERMINATOR 2: JUDGMENT DAY.” The major studios behind DARK FATE’s production, Paramount Pictures and 20th Century Fox, were probably ecstatic at this pull quote, because nothing sells a sequel better than a close association with the originals in terms of quality and audience expectations (see 2018’s HALLOWEEN). That new car smell wears off pretty quickly, however, once you realize making a TERMINATOR sequel that’s better than all the non-Cameron sequels isn’t that high of a bar. TERMINATOR 3: RISE OF THE MACHINES was occasionally okay, even if it was nothing more than a soft retread of JUDGMENT DAY that mostly felt made-for-television. TERMINATOR: SALVATION had interesting ideas but was plagued with major script rewrites to cater to Christian Bale’s interest in playing John Connor, whose status as a cameo was beefed up to a major role following his involvement, and which threw off the tenor of the story. Then came TERMINATOR: GENISYS, which, holy shit, I don’t even know. I just know that it was dreadful, not helped by its lame PG-13 rating. By then, general audiences seemed very over the franchise, so even when it was announced that a new sequel was going into production that would retcon every sequel since JUDGMENT DAY, be directed by DEADPOOL’s Tim Miller, bring back Arnold Schwarzenegger, and also see the return of creator James Cameron in a consultant/producer role, the Internet barely cared. However, when it was revealed that Linda Hamilton, gone from the franchise since JUDGMENT DAY, would also be returning, the Internet finally raised an eyebrow. It would seem there was still interest after all.

Those initial reactions were right: TERMINATOR: DARK FATE is, indeed, the best TERMINATOR sequel since JUDGMENT DAY. It’salso an underwhelming effort that squanders the opportunity to wipe the slate clean in this franchise’s second attempt at a cinematic “okay, for serious this time…,” which it had previously wasted on GENISYS. It also squanders the return of Linda Hamilton as the legendary Sarah Connor by misusing her character thanks to the very unexpected story changes that rock the established mythos – not because it was needed, but becauseit was easier than continuing the story arcs for every character left standing at the end of JUDGMENT DAY. The opening scene, utilizing the best use of de-aging techniques I’ve seen yet (seriously, one might think they were deleted scenes from JUDGMENT DAY’s production), is staged to be a shocker when a Terminator wearing Arnold’s face waltzes on screen and kills young John Connor. The sequence is meant to conjure the realization that shit’s about to get real. And it does — while also asking fans to make the hugest leap yet in terms of retconning a story by asking them to accept a major change in the series’ dynamic:

For two films, the continued existence of John Connor would make or break the entire world.

But according to DARK FATE: “Nah, don’t need him.”

That decision is a huge pill to swallow on its own, but there’s more: multiple Terminators (who for some reason looked like Arnold, which makes zero sense being that he was the protector in JUDGMENT DAY) were sent back during that particular timeline to make mincemeat of John Connor. I’d love to know what this particular Arnold-faced Terminator, a hunter-killer machine imbued with all kinds of technology for seeking and destroying targeted prey, was up to while the T-1000 was blowing up half of Los Angeles – perhaps his CPU was ransomwared and he had to scrounge up the money to unlock himself.

To its credit, DARK FATE tries to be different from what’s come before. The problem is this is a Part 6 that’s also a Part 3, and alsothe third Part 3 in this series. No studio will ever be daring enough to return the series to the grounded, gritty, grindhouse style of 1984’s THE TERMINATOR; no matter which studio had the rights, they were all intent to remake JUDGMENT DAY over and over instead. The first two TERMINATORS are more than just great movies; they’re legendary watershed moments in cinema history and keepsakes that can’t be replicated. With Cameron having pushed special effects into new, uncharted territory, both of his TERMINATORs invoked awed questions of, “How’d they DO that?” In this new era, the audience isn’t asking that question anymore because they already know the answer: CGI. And it’s so boring. Even though, according to this newest timeline, TERMINATOR: GENISYS no longer exists, the damage has already been done. Not only did it up the ante in terms of action extravaganza, leaning heavily on CGI, but it also used up another take on the same old story: trying to prevent a future war with sentient A.I. RISE OF THE MACHINES claimed that Judgment Day was always inevitable. GENISYS repackaged Skynet with a new name (that sequel’s title), a new global operating system that basically made Google and iPads the bad guy. DARK FATE says Judgment Day was avoided, but in effect, led to the creation of a new evil A.I. company called Legion with the same end result. It doesn’t matter if our heroes are battling Skynet, or Genisys, or Legion if it all feels like the same old shit, and it really does feel like the same old shit. Added to that, GENISYS’ sins continue by also having squandered Arnold’s return to the series after a fifteen-year absence. For all these reasons,DARK FATE would play better if the previous sequel never existed, because even though it goes in a mostly different direction, their third acts feel almost identical when the spectacle hits the most ridiculous highs. Once a Humvee filled with people is pushed out of a midair Gulfstream and parachutes down into the Hoover Dam, where it then rides its falls all the way down to the bottom of the reservoir, coming to a rest underwater where the action continues, you can’t help but remember, in spite of all the spectacle and CGI and millions of dollars that sequence alone must’ve cost, how much better and more thrilling this series used to beback when it was just one plucky young girl fleeing from a robot in a factory, or when our heroic trio was being pursued by a liquid metal cop driving a tanker trunk down an L.A. highway.

Though I’ll forever be an Arnold aficionado, my man love for him barely flared when his name appeared in the announcement for DARK FATE. No, I was much more eager to see Hamilton return to the series after her nearly thirty-year absence. Except for television work and obscure movies, Hamilton hasn’t appeared in anything prominent since 1997’s DANTE’S PEAK (where she played the hilariously named Rachel Wando). I wish I could say her return was a triumphant one, and even though she strikes an incredibly interesting image with her short-cropped silver hair and her aviators, her performance can be summed up by DARK FATE’s overall final product: okay, not bad, but should’ve been a lot better for what this was supposed to be.Thankfully, Mackenzie Davis as Grace, the new Terminator Protector, offers the film’s best performance, and not by default, but because of her actual thought-out, dedicated take on, essentially, the new Kyle Reese. Sadly, Natalie Reyes as Dani, “the new John [Connor],” barely registers as a presence let alone the future leader of the resistance against the robotic scourge. Her miscasting echoes that of Emilia Clarke’s miscasting as the rebooted Sarah Connor in GENISYS. In THE TERMINATOR and TERMINATOR 2: JUDGMENT DAY, I easily buy Hamilton’s pluckiness and her badass warrior take on the character, respectively. Reyes gives it her all, but she never feels comfortable in the role she was given. As for Arnold, well, it’s not that he offers a poor performance, because he’s basically been doing the same thing since JUDGEMENT DAY – it’s more that the limits of the character don’t allow him to do anything new, and it’s not much of a novelty to watch anymore. Even sadder, DARK FATE, which rides a wave of well-executed action sequences and mediocre drama, slows to a halt once his character appears in the third act, as the audience waits for his return to feel more than what it is, which by now is obligation. By now, his presence is expected, so much that he was literally CGI-ed into TERMINATOR: SALVATION, but again, there’s a problem: no one knows what to do with him anymore to make him more interesting than what’s already been done, and if that’s not happening, why include him at all?

TERMINATOR: DARK FATE also tries to be current and “woke,” but solely in an acceptably mainstream way: it suggests that women can be tough (which many male members felt was pandering, even though the strong female angle has been a mainstay of this genre since the 1970s), and that the leader of the resistance isn’t just a girl but a Mexican girl (whoa!). There is, however, one moment that works, and that’s when Davis’ Grace asks a prison guard at a Texas/Mexico detainment center where illegal border-crossers are held, and the guard replies, even in the midst of all the Terminator shit hitting the fan, “We call them ‘detainees,’ not ‘prisoners,’” and Grace looks ready to backhand her simply for that response.

Even though it pains me to say this (while also acknowledging that the world doesn’t need further TERMINATOR sequels), the only path forward for this franchise is to start entirely from scratch – no Arnold, no Hamilton, no Cameron, and an entirely new storyline. To whichever studio is the next to land the rights, please, I beg you: hand over the reins to a new generation with new ideas, let them do what they do, and stop meddling. Otherwise, if there really is no fate but what we make for ourselves, then we are fated to see the same movie over and over until the franchise is dead for good. 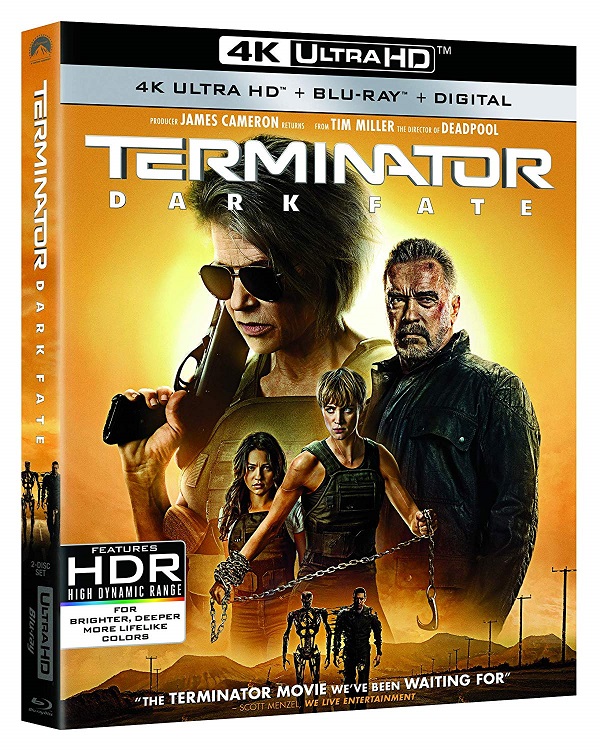