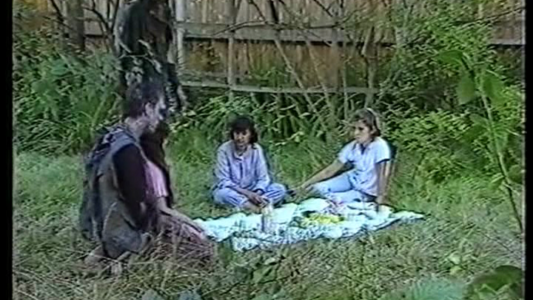 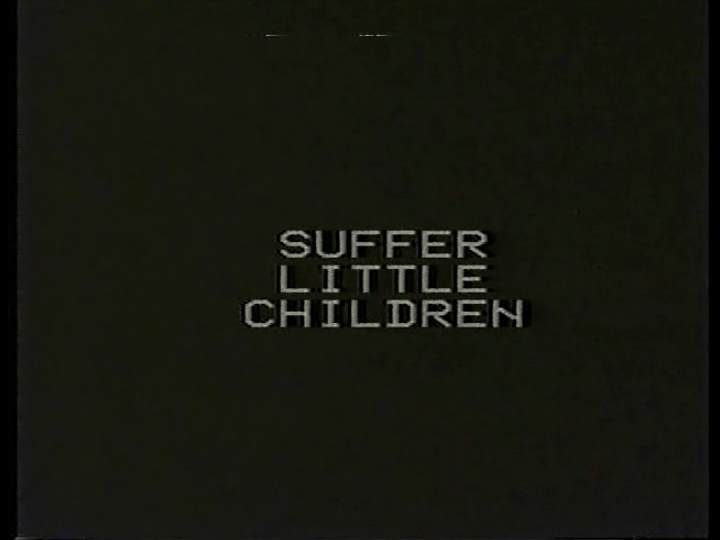 There are really only a handful of genre movies that can truly be called “notorious” – films whose reputations for something truly wicked supersede actual experiences having watched the damn thing. (In recent memory, the only one that comes to mind is A SERBIAN FILM, which I know enough about to know that I’m not really all that interested in checking it out.) Widely seen films can never really be notorious, no matter how lurid they are, as they can be discussed in general company rather than solely in hushed tones, whispered amongst the corridors of cult film groups and screenings. Notoriety in cult filmdom requires a repellant (by normal standards) premise as well as a general state of obscurity, making the sinister cinema even more alluring in its unavailability. (It also has to be at least somewhat interesting to watch.)

Alan Briggs’ 1983 “based-on-a-true-story” tale SUFFER, LITTLE CHILDREN, recently issued for the first time via InterVision, is one such notorious creature, even if its notoriety doesn’t really extend much beyond completists of Video Nasties or shot-on-video horror. The reason for this is simple–the no-budget obscurity from England never landed any kind of VHS release here in the states (and barely eked out one in its home country), and the cast is composed primarily of children, centering around them doing terrible, terrible things to both each other and the adults around them. As a result, SUFFER, LITTLE CHILDREN has been on many sordid cinephiles’ “most wanted” lists for years, and grey market copies of the film, ripped from VHS transfers that looked like crap to begin with, have served as pretty much the only way to see it since its meager release. 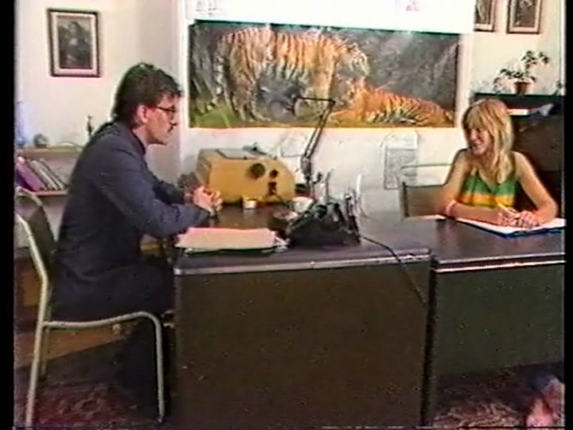 Now that the damn thing can be seen, of course, the question is whether or not the content of the film actually stacks up to its sordid reputation. For the SOV fans that would know about this film in the first place, the answer is most assuredly “yes,” though not necessarily for the same reasons that one would anticipate.

For one thing, SUFFER, LITTLE CHILDREN, much like films such as HOUSE OF THE DEVIL or Claude Chabrol’s LA CEREMONIE, is a bit of a “slow burn” flick, with not a hell of a lot in terms of action happening within the first hour of its 76-minute running time. The film centers around a child care facility run by Jenny (Ginny Rose) and Maurice (Colin Chamberlain) and the arrival of Elizabeth, a mute girl (Nicola Diana), at their doorstep. Unable to locate her parents and given only a cryptic note as to her origins, Elizabeth is brought into the house and doesn’t integrate well with the other kids–in fact, weird stuff begins to happen around her and she seems to start taking control of two other girls after a zombie picnic dream sequence that would make Tina Belcher proud. 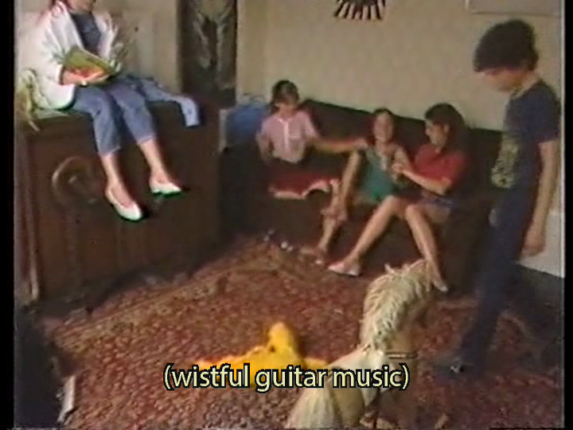 While Elizabeth’s sinister escapades are in the background, much of the first two-thirds of the film are centered around the return of one of the home’s most notable alumni, rock singer Mick Philips (Jon Hollanz), who has come back into town for a benefit concert. His presence results in a semi-love triangle when he starts to romance Jenny, much to Maurice’s chagrin. Oh, also some kids almost drown.  Offscreen. And we never even get to see Mick perform–he’s not even the one responsible for the amazingly upbeat, poppy title track that should be included on any compilation album of ‘80s horror film musical obscurities in the future. It’s a lot of tease, and a lot of stuff almost happening.

It’d be perfectly understandable for the average viewer, one not amenable to the charms of a VHS-shot movie with tracking issues, acting that ranges from “tolerable” to “non-existent” (Diana’s portrayal of Elizabeth isn’t so much a performance as it is staring into the camera a lot) and loads of dialogue about the state of the characters’ relationships, to dismiss SUFFER, LITTLE CHILDREN at this point. But I beg of you, bask in the film’s soothing, scrappy camcorder-lensed ooze and wait it out, as the final twenty minutes deliver with such a mind-melting gusto of goofy gore and unrestrained batshittedness that it moves any memory of drudgery to the distant past. I won’t spoil it, as I was raised correct, but the last act of SUFFER, LITTLE CHILDREN truly earns the film the notoriety that it has amassed over the years. 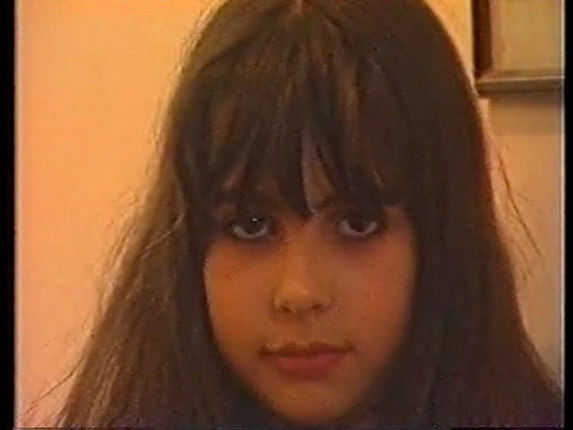 The DVD presentation includes English captions, which I otherwise wouldn’t note, but in this case, they’re particularly helpful, not due to the British accents, but due to the sound quality and the fact that the music often overwhelms the actual dialogue. (Even the captions give up on figuring out what’s being said at certain points.) An even better bonus feature comes in the form of an interview with director Briggs, who talks about the film’s creation and how the kids, students in a local theater school, were just having a blast. An interview with John Martin, an expert on Video Nasties and author of Seduction of the Gullible: The Truth Behind the Video Nasty Scandal, rounds out the offerings, giving insight into the oddity’s place in the canon of unseemly cinema of the era. 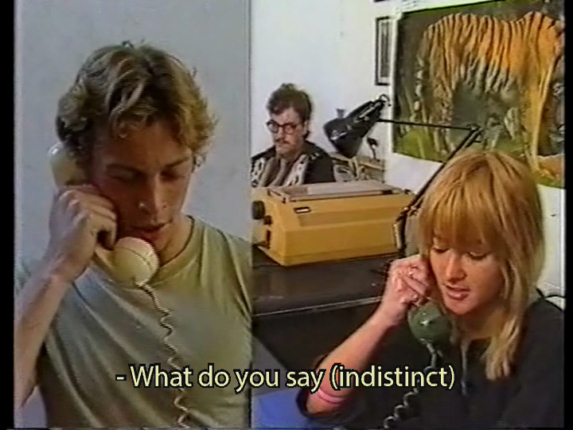 Assigning traits like “good” or “bad” to a movie like SUFFER, LITTLE CHILDREN is like trying to assign a color to “inertia”–it’s not something that can actually be done using our primitive Earth languages. SUFFER, LITTLE CHILDREN is a fantastic treat for those amenable to its twisted, no-budget charms who will welcome its inexplicable nature and half-finished tone, and a grueling exercise in pain for those that won’t. Those that won’t, however, are unlikely to have stumbled on this review of the film, so if you’ve read this far and are still intrigued, you’re exactly the sort of person who should have SUFFER, LITTLE CHILDREN adorning your collection. 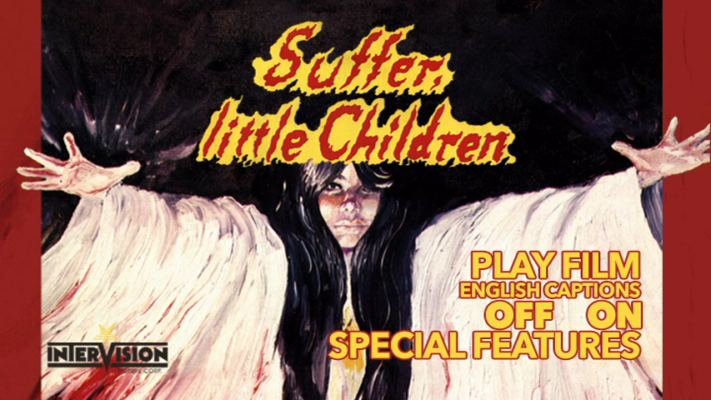