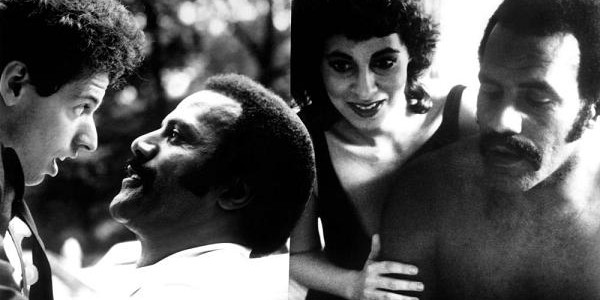 After watching 1980’s FIST OF FEAR, TOUCH OF DEATH, and then doing some research into the film after the fact, I’m still at a loss as to what it is I actually watched. Marketed primarily as a documentary about the life of Bruce Lee interspersed throughout a karate-style championship taking place in New York City’s Madison Square Garden, FIST OF FEAR, TOUCH OF DEATH is actually some kind of strange, experimental, horrendously unfunny comedy of sorts in which a group of disparate fighters take to the ring to prove who is the ultimate heir to Bruce Lee’s legacy. Apparently, “blaxploitation” star Fred “The Hammer” Williamson is one of them, though he spends the first third of the film lounging or walking around New York City while being repeatedly mistaken for singer Harry Belafonte. If you know your history, then you know that Bruce Lee was quite dead by the time this film went in production, having died seven years prior in 1973, which makes FIST OF FEAR, TOUCH OF DEATH, one of several films made to capitalize on his death. (Another is the subtly titled BRUCE LEE FIGHTS BACK FROM THE GRAVE.) There are enough of these films that a phrase was coined to group them into one disposable bucket: Brucesploitation. 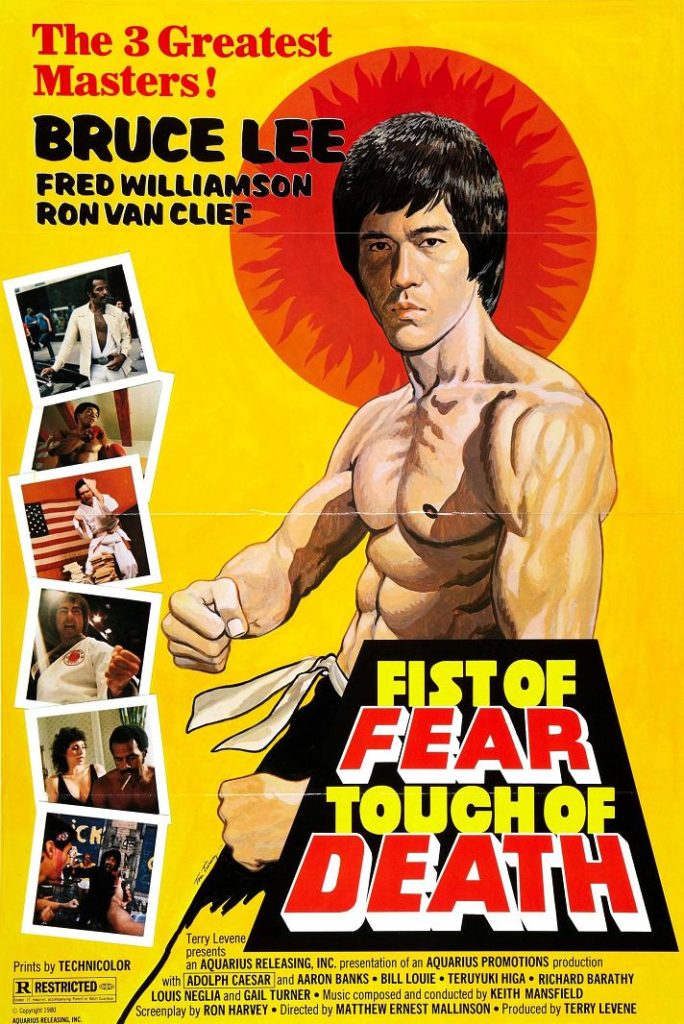 FIST OF FEAR, TOUCH OF DEATH is a grody, low-budget, ugly-looking film that has the appearance of being scraped off a city street. With 2020 eyes, it’s also quite offensive. The film’s main narrative push – that of the championship fight – is often interrupted with clips taken from some of Bruce Lee’s earliest films, only they’ve been redubbed by clearly American actors so that the fictional characters are now meant to be Lee and his own family, including his domineering mother who impugns him for wanting to seek a future in martial arts. That the same “oriental” sounding stretch of music plays over and over in the background of some of these clips doesn’t help, nor does the fact that these so-called explorations into the China-born Lee’s earliest beginnings are total fabrications, including the hilariously offensive revelation that Lee’s grandfather was a “samurai” – you know, the breed of warrior from the entirely different country of Japan. The whole gimmick actually manages to impress by being both racially and aesthetically offensive while also showing an ungodly amount of disrespect to the legendary Lee, as the film suggests that his actual history wasn’t interesting enough to maintain interest in the audience. I should mention that the flick opens with an “interview” with a fighter who claims that Lee actually died by the so-called “touch of death” – yes, the finishing move that Beatrix Kiddo uses on Bill in the finale of Quentin Tarantino’s KILL BILL: VOL 2. (The famed director found himself in a little bit of hot water following his release of ONCE UPON A TIME IN HOLLYWOOD for his own depiction of Lee, which was accused of being not just racially insensitive but also presenting Lee in his limited appearance as a show-boating, egotistical diva.)

As a viewer, I’m normally open to the mockumentary approach to filmmaking, which so far has been utilized almost primarily in horror, though there are notable exceptions across every genre. Seeing that technique applied to Bruce Lee’s legacy while exploring his legacy and effect on a new generation of “fighters” (read: Fred Williamson) had the potential to be something more. Director Matthew Mallinson, who it should come as no surprise was primarily an editor during his career, had ample ground to play around with bigger ideas, like the implications of being a legend, how that status can turn an ordinary human being with extraordinary skills into a larger-than-life figure, and what it’s like for the next generation of fighters to exist in that shadow. Instead, we’re left with some kind of half-assed comedy that manhandles Bruce Lee’s legacy, botches his biographical history, and most damning from the audience’s perspective, bores the hell out of you. In spite of Williamson having said of the film, “It was never meant to be a serious martial arts movie; it’s a comedy and satire,” IMDB lists this monstrosity as a “documentary,” offering the false impression that FIST OF FEAR, TOUCH OF DEATH contains real, actual information pertaining to the life of Bruce Lee beyond the most broad of strokes, like he was alive once, was really good at martial arts, and then died. The rest is bullshit. 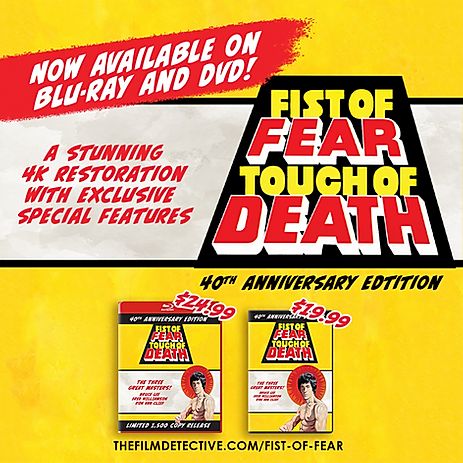 The new Blu-ray release from The Film Detective contains the following special features: