The evil kid sub-genre has been kicking it at least since 1956’s THE BAD SEED, but was certainly most popularized following the release of THE OMEN in 1976. Richard Donner’s anti-Christ fable is still considered one of the all-time greats released during film’s pinnacle of the 1970s, having inspired three sequels, a remake, and a short-lived television series. Ever since then, most evil kid flicks have taken its page from THE OMEN just a little, and in some situations more than others, it absolutely shows.

I say over and over that I don’t care how many times you repackage the same horror concepts and tropes. So long as your flick is well made, lacks pretension, and adds just a twist of freshness, I’m on board. (For example, I adore THE CONJURING, even though it tells one of the most derivative stories possible in the genre.) And that’s where THE HOLE IN THE GROUND comes in. 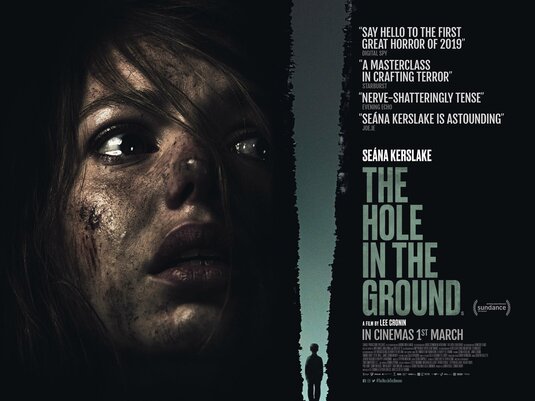 Possibly based on the short story “The Samhain Feis” by Peter Tremayne, about a woman and her young son escaping a miserable husband/father to a cottage in Ireland where the son becomes possessed (maybe) by an ancient spirit, director Lee Cronin makes his feature directorial debut in this familiar but well-made supernatural tale. As noted, it treads similar ground to Tremayne’s short story, although now instead of an American woman traveling to Ireland with her son, it’s Sarah O’Neill (Seána Kerslake, who looks like a combination Rebecca Hall/ Ellie Kemper) locating a quiet, out-of-the-way place in her native Ireland to take a moment out and raise her son in peace. (All we know is that there’s bad blood directed at the family’s patriarch, but we never find out what, and he never appears on screen.) While doing some exploring, Sarah discovers an unnaturally large crater in the woods behind her house and steers her son, Chris (James Quinn Markey), away from it. But whatever dark forces dwell in those woods/that crater won’t take no for an answer and soon take control of young Chris, pitting Sarah in a helpless and hopeless situation and leaving her to figure it out on her own.

While THE HOLE IN THE GROUND is familiar, Cronin, who writes as well as directs, establishes a fair pace while skillfully slipping in scenes to unnerve or even terrify his audience. Sarah catches small glimpses of her son acting in ways very unlike him, or very unlike that of your normal human being, and this begins to mount, with each instance becoming more disturbing and presenting Chris as increasingly less like her little boy. Cronin, also, very smartly directs young Markey to play Chris as off rather than downright creepy or evil from the word go, allowing the audience to wonder if perhaps Sarah is just undergoing some undue stress from her recent separation. Markey never outright acts evil, in the same way that THE OMEN’s little Harvey Stevens mostly just plays a little boy, which ironically causes him to come across even more off-putting. Additionally, GAME OF THRONES’ James Cosmo appears in a supporting role as a mourning father still getting over the loss of his own child, and who, as you might expect, provides most of the film’s exposition.

THE HOLE IN THE GROUND isn’t going to win any awards for originality, but, as usual, A24 knows what they want from the horror genre, and it’s just one more solid acquisition for one of the most respected indie film distributors in the land.

THE HOLE IN THE GROUND is now available on DVD or to stream from A24/ Lionsgate Films.