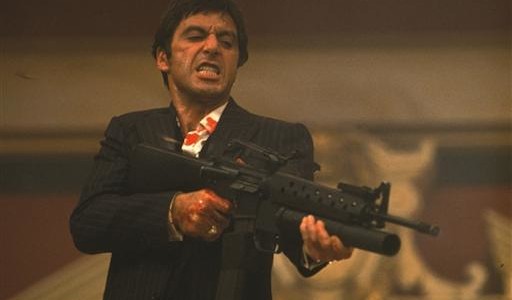 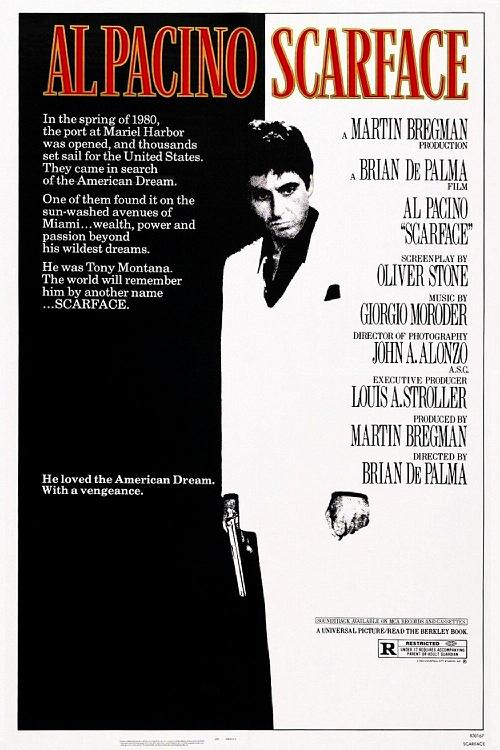 There are gangster movies and then there are ultimate gangster movies. SCARFACE is one of the latter. Long held in esteem by critics, film fans and, somewhat oddly, hip-hop artists, who admire a story about an immigrant coming to America with nothing in his pockets and building an empire, it consistently stands the test of time as it passes from generation to generation. Sure, the fashions are hilariously dated, along with its soundtrack (seriously though, who’s gonna diss Giorgio Moroder?), but one can’t deny that SCARFACE has achieved infamy and staying power.

The operatic, over-the-top gangster epic is the result of a collaboration behind some of the biggest names in ‘80s and ‘90s cinema — screenwriter Oliver Stone, who was basically snorting the same amount of cocaine that adorns Tony Montanna’s desk during the flick’s final moments, and director Brian De Palma, who had yet to make a film that mainstream, and wouldn’t do so again until 1996’s MISSION: IMPOSSIBLE. Headlined by a fierce and dominating performance by Al Pacino, SCARFACE revisits the 1932 Paul Muni original directed by Howard Hawks, updating its central premise from bootleggers to drug dealers, from Italians to Cubans, and from shots to the gut with a Tommy gun to being chainsawed apart in a bathtub. While it maintains the very basic concept of its 1932 predecessor, right down to the love triangle between Tony, his sister ( :-O ), and his best friend/bodyguard, it obviously delves a lot more into the many characters’ backgrounds — and you’d expect it to, considering it’s literally twice as long as the original.

I can think of a bevy of titles that have gone on to achieve classic status that I respect more than I like. ONCE UPON A TIME IN AMERICA, for example; LAST TEMPTATION OF CHRIST is another. These are films that I watch, can appreciate, and even marvel at their artistry, but aren’t films I ever feel compelled to revisit. I count SCARFACE among those, considering it’s a far less subtle or philosophical title than the aforementioned titles. At times, SCARFACE can feel like a triathlon — not just because of its three-hour running time, but because of the content packed into that running time. It’s easy to watch 1932’s SCARFACE with modern eyes and see a tame film, lacking graphic violence or blood, but back during the era in which it was made, it was seen as very controversial and a risk for the studio. (This is why the film opens with a disclaimer condemning the actions of its main characters ahead of time, even throwing responsibility onto the viewing audience to work in tandem with the government to help quash these kinds of criminal enterprises, lest they become complicit.) De Palma embraced that shocking aesthetic, deciding that his version of the story had to be just as shocking, BUT, shocking to audiences with a more modern sensibility, which is how we ended up with chainsaw surgery. Everything about SCARFACE is flamboyant — it’s the most violent and cocaine-infused soap opera you’ve ever seen. And boy, Pacino isn’t just shooting for the rafters with his performance, but he’s aiming a nuclear bomb at the nearest beam, and this was before all his yelling earned him an Oscar for SCENT OF A WOMAN, which many believe transformed him into the actor of today known as Yell Pacino LOL. (Sorry.) 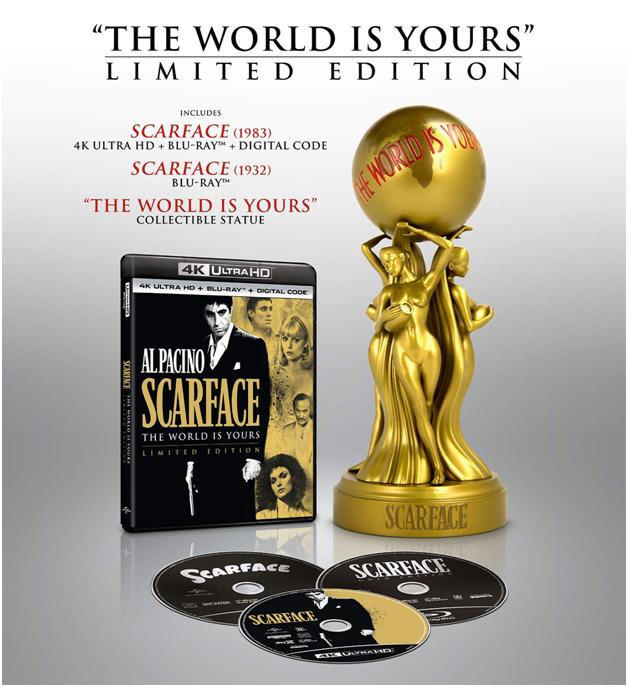 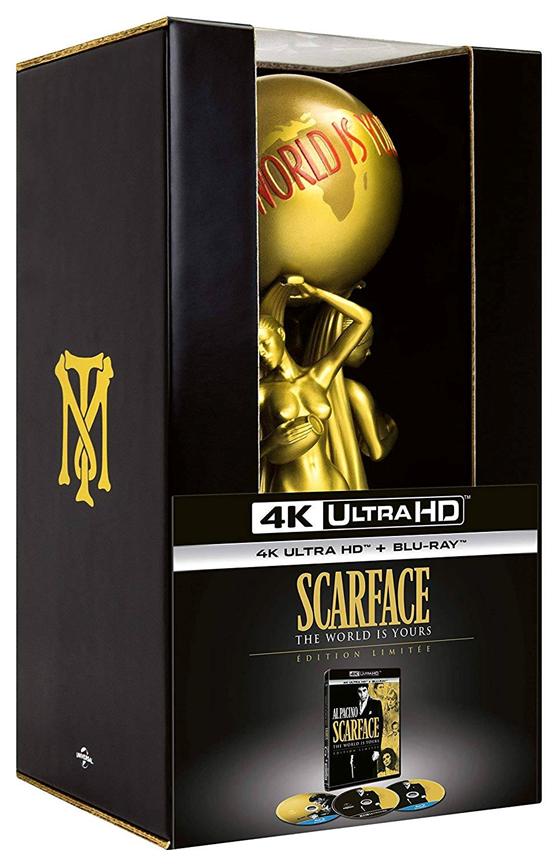 Of all the major studios revisiting their biggest titles for new 4K UHD releases, Universal Studios has been doing the best work in terms of offering fun and swanky limited editions of certain beloved titles. Their previous releases of E.T.: THE EXTRA-TERRESTRIAL, and especially THE BIG LEBOWSKI, offered  similarly clever swag releases, and SCARFACE has proven no different. Available in several different releases, the “World is Yours” limited edition comes packaged with a fairly heavy recreation of the larger statue that adorns the pool inside which Tony plunges to his bloody, bullet-ridden death. (I can’t wait to see what the studio does when it comes time for the inevitable release of JAWS on 4K.) Also typical, the studio has done stellar work in the video and audio departments, giving the dated-looking SCARFACE as modern of a facelift as it can while remaining loyal to the source material and its original presentation. Refreshingly, this new remastered picture has also been made available on the standard Blu-ray release included in the 4K UHD set as well as in its individual release. The limited edition release also includes the Blu-ray debut of the original SCARFACE, which is obviously a great inclusion and adds value to the asking price, but which absolutely deserves an individual release further down the road. It really is a bonafide classic and deserves to be more than just a “bonus” reason to buy the 1983 update. (It also doesn’t contain any special features beyond a recycled Turner Classic Movies introduction, nor is it included in the Movies Anywhere digital download code.)

Nearly all of the special features included are ported over from previous home video releases, with most of them appearing in SD, as they were produced for a previous anniversary edition DVD release. The sole new feature is the 35th Anniversary Reunion, which sees De Palma, Pacino, and Michelle Pfeiffer musing on SCARFACE’s longevity, its interest as a snapshot of 1980’s culture and cinema in general, and its utter bonkersness. 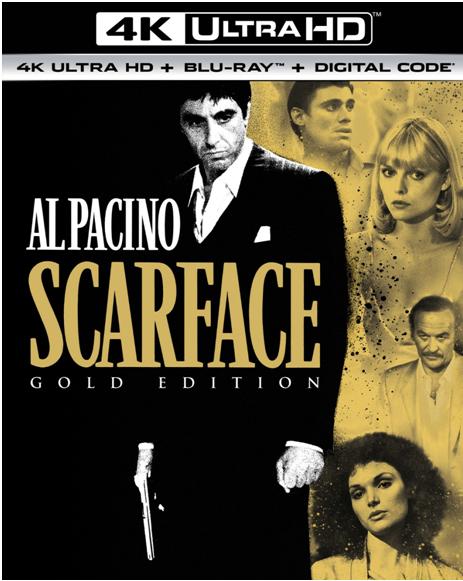 The complete list of special features included on both the Limited Edition 4K UHD release and the Gold Edition Blu-ray releases is as follows: 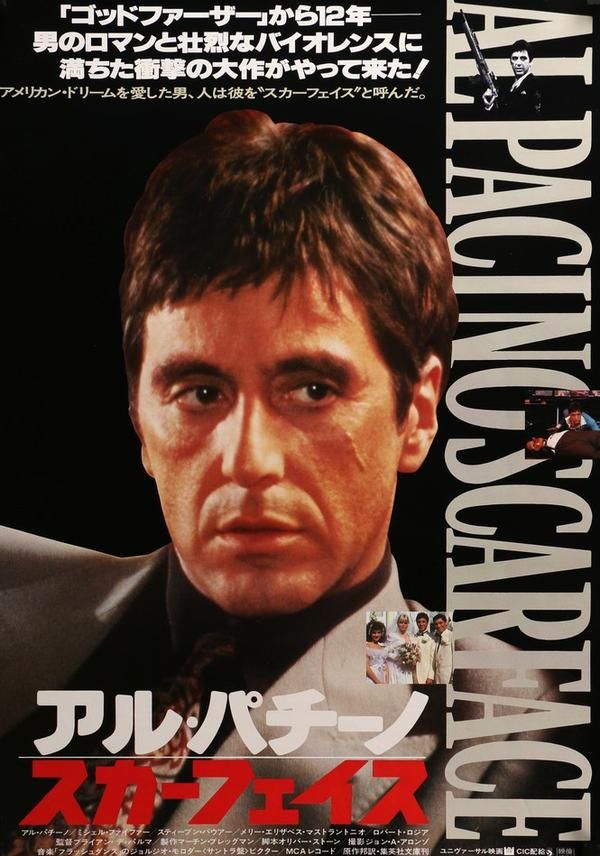