Legacy looms large over DOCTOR SLEEP and finds itself as a recurring theme in many of the characters and arcs told in its two and a half hour running time. The legacy of an alcoholic father, passing along his rage and addiction to a son that barely knew him. The legacy of a supernatural race, clawing its way for survival as it buys more time with the blood and screams of children. The legacy of a traumatic event and the shuttered, haunted grounds on which it took place. For a film with a child character as one of its main protagonists, DOCTOR SLEEP (from writer/director/editor Mike Flanagan, adapted from the book by Stephen King) is very much concerned with the end of the line—what it means when time runs out and what is left behind by our deeds. The largest legacy the movie tackles is that of Stanley Kubrick’s 1980 adaptation of THE SHINING, finding ways to embrace those well-worn designs and sequences without being drowned out by almost 40 years of iconography. Sometimes it succeeds, sometimes it doesn’t; but in the end, Flanagan’s DOCTOR SLEEP is a rich and engrossing film with strong character work, impressive world-building, and enough memorable moments that maybe it too will be able to etch out a legacy of its own.

The story nominally begins 31 years after the incident at the Overlook. After years of the trauma of various forms of ghosts pursuing him, Danny Torrance (Ewan McGregor) has grown up to be a degenerate and an alcoholic, dulling his psychic abilities while slowly killing himself from inside of a bottle. After a new low and a moment of clarity, he seeks refuge in a new town and meets new people, including Billy Freeman (Cliff Curtis), who help him begin the road to reclaiming his life and relighting his talents. Meanwhile, across the nation, a predatory tribe of psychic vampires, headed up by Rose The Hat (Rebecca Ferguson), track down those with special powers to steal their life force through ritualistic killing and the creatures’ own psionic artistry. Time passes and a new, powerful force announces itself in the form of young Abra Stone (Kyliegh Curran). Rose and Danny are soon set on a collision course—one salivates over the ultimate feast that could sustain her tribe while the other sees a ghost of himself at the mercy of unnatural monsters.

There has been a renaissance of interest in Stephen King properties. Most will point to 2017’s IT as the big breakthrough, but it has been brewing since 2004’s Lost, reaching a fever pitch in 2016 with Stranger Things, and then exploding onto screens right after then. The prolific author has always had some film/tv projects in the works and a few adaptations going since CARRIE, but these past four years have been a boom time for Bangor’s favorite son. Since 2016 there have been five television shows directly based on works by King (11.22.63, Mr. Mercedes, The Mist, Castle Rock, Creepshow) and nine film adaptations (CELL, THE DARK TOWER, IT, 1922, GERALD’S GAME, PET SEMATARY, IT CHAPTER TWO, IN THE TALL GRASS, and now DOCTOR SLEEP).

There are cultural reasons for this resurgence—King’s texts lend themselves to the type of interconnected and serialized mythos that have become very popular in the age of Netflix and the Marvel Cinematic Universe. But the biggest reason is that the weird kids that grew up reading the Master of Horror in the ’80s and ’90s and watching adaptations of his stuff are now adults making works of their own. These former acolytes have brought the sensibilities they learned from King’s vast bibliography of almost 95 books to their own projects, many wanting to properly tackle an adaptation. DOCTOR SLEEP is where these elements cross streams—all via Flanagan’s incredible talents as a filmmaker. 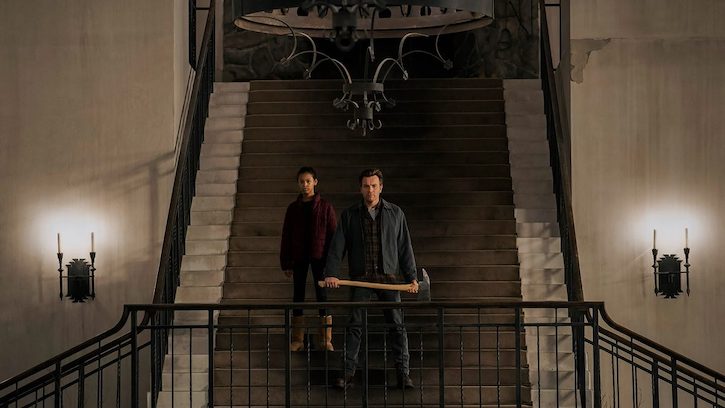 Mike Flanagan is one of the best filmmakers in horror today. His track record—ABSENTIA, OCULUS, HUSH, OUIJA: ORIGIN OF EVIL, BEFORE I WAKE, GERALD’S GAME, and The Haunting Of Hill House (season one anyways)—is full of more hits than misses and even his “weakest” project has at least a scene, image, performance, or some element that is truly captivating and haunts the minds of viewers for years. Deciding to engage with Kubrick’s THE SHINING instead of King’s original book version (and malformed mini-series attempt) shows not only a keen sensibility but a lot of intestinal fortitude—he has to incorporate and recreate elements that are globally known and revered that were developed by a man who is roundly considered to be one of the greatest filmmakers of all time. Flanagan’s reasoning for this, as opposed to a straight adaptation of King’s 2013 novel, is that the vast majority of people know Kubrick’s version—so why not use it and integrate that into the plot while retaining the same general narrative strokes and central themes? It’s a smart move, but also one that occasionally hurts DOCTOR SLEEP; particularly when actors (Alex Essoe, Henry Thomas, Carl Lumbly) are asked to bring back Kubrick’s iterations of characters with their specific cadences and appearances; it’s not as distracting as a CGI actor corpse, but it is still sometimes off-putting. The actors do a good job of elevating it from an impression (Lumbly in particular shines—M.A.N.T.I.S. 4 lyfe!), but it’s still a distracting element that is also a necessary evil of the story. It’s a very minor issue that is really only pronounced in a couple of smaller scenes but does indicate some of the various obstacles Flanagan took on in this project.

This is not the scariest film with King’s name attached to it (or with Flanagan’s, for that matter)—though there are startling moments of true dread, gore, and nightmarish imagery—but DOCTOR SLEEP is one of the “King-iest” movies ever made. There are horrific events, family issues, substance abuse issues, New England towns, psychic children, seemingly random/unflinching dispensing of beloved characters, a character that is a writer, baseball, and a spark of hope surrounded by shadows that are constantly amassing. It’s only missing ’80s pop rock and a reference to Castle Rock to fill all the squares on your Stephen King bingo card. There’s a dense mythology in the background, involving these psychics and monsters and ghosts and more. Wisely, it’s never really explained. The psychic vampire tribe has its own set of slang that they casually toss around, but never outright define. This is all a testament to fantastic worldbuilding in DOCTOR SLEEP in which there is a sense of a wider story spanning millennia in which our characters are minor parts but there is no need for exposition. The script, direction, and performances all make it very clear what is happening; and while that leads to “new” ways for these extrasensory abilities to manifest throughout the story, it doesn’t feel like a cheat but instead a very intelligent way of escalation built on what has occurred onscreen. And those displays of power are some of the most impressive visual elements of the film, with psychic warring and meetings on the astral plane that feel like they could have been ripped from the pages of Professor X story (in fact, only Legion has ever done better with these types of visual interpretations). 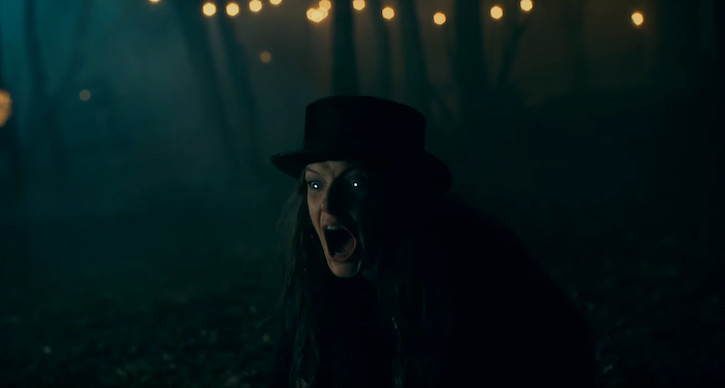 While the visuals are impressive, it is in the hands of the actors that DOCTOR SLEEP transforms into an incredibly satisfying and engaging film. There are truly delicious performances by Lumbly, Zanh McClarnon, Jacob Tremblay, Emily Alyn Lind, Cliff Curtis, Carel Struycken, and more—though it is the three leads that serve as the pillars of the story. McGregor’s Danny isn’t the most interesting character for large swaths of the runtime, acquiescing his presence to the much more dynamic roles of Ferguson and Curran. However, there is so much humanity on display in every scene that he becomes the beating, broken heart of DOCTOR SLEEP. There are scenes of temptation where Danny is offered the chance to throw away his sobriety that are painfully tense moments; rarely does that struggle with addiction translate as well on screen.

Ferguson, as noted, is truly amazing as the antagonist and utterly captivating (she seems to savor the villainess, as in THE KID WHO WOULD BE KING). Rose The Hat is a monster, but one with clearly defined motives who is intoxicating, terrifying, alluring, cruel, matriarchal, and grotesque. Rose is a true threat that infuses her interactions with a fantastical sense of menace, like something out of a fairy tale that waits in the dark woods for unsuspecting prey. Her counterpart is Abra (Kyliegh Curran), a pre-teen/teenage girl and total badass; the best X-Men character that never was, Curran is playful and arrogant in that way that exceptional children can be, with vulnerability showing through as she tries to navigate this ever-widening world. All of this on top of being incredibly charming in a way that announces not just the arrival of a new horror hero but also an impressive acting talent. The director of SLEIGHT and SWEETHEART, JD Dillard, has remarked that he wants to see (and is actively working to create) more black characters (particularly women) fighting dragons and flying spaceships. That is to say, more of them showing up in genre fare—as the actual heroes and not just the supportive friend or fodder for the villain. Curran’s Abra is a perfect example of engaging with this archetype in a form beyond bland white dude that brings a new energy and fresh depth to the heroic ingenue. 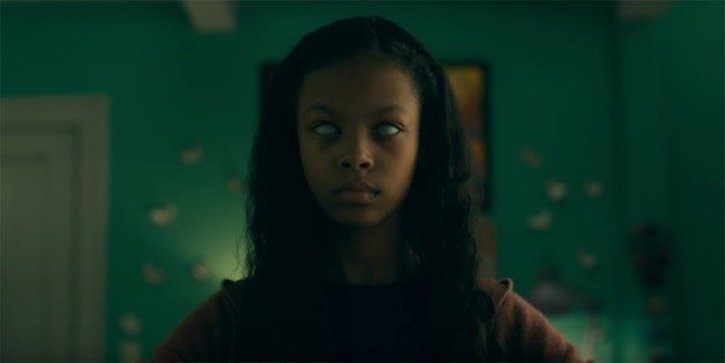 Including this one, there have been four film adaptations of Stephen King in 2019. DOCTOR SLEEP is the best film of the bunch, delivering a fully realized world steeped in history (both fictitious and cinematic) with multilayered characters and an engaging story. Flanagan’s color correction to mostly deep blues and greens (which, to be fair, is his usual palette) is an interesting contrast to the stark brightness of Kubrick’s SHINING, with its blinding oranges and whites that only the ’70s could produce. This new spectrum of color suggests a muted world that lives in the mucky shadows of the former one; what was once alive and vibrant is decaying and fading further into the abyss. Death is prevalent in DOCTOR SLEEP—not only are there ever-present ghosts, and a lot of characters meet their ends in the course of the story, but multiple scenes takes place in a hospice. With the theme of legacies looming high—of those who have come before us, be they fathers or artistic influences—characters stand at the edge of mortality and worry about what awaits them. The youthful optimism that started off the Torrance journey in that yellow Beetle almost 40 years ago has given way to the winter of fatalism.

Characters in DOCTOR SLEEP are seeking peace—from the bottle, from ghosts, from their vampiric cravings, from antagonists, and more—an attempt to understand of the world. King has grown from the frenzied addict of Jack Torrance into the comforting elder statesman surveying this place he shares with so many strange and new faces (though not without his own scars to show for it); “it’s like poetry, they rhyme.” As a two-and-a-half hour long film that incorporates a 40-year old modern classic while spanning locations, years, and cast of characters, DOCTOR SLEEP is literally an epic; but in the end, it’s just a tale of some people trying to make sense of what came before and what they will leave behind.