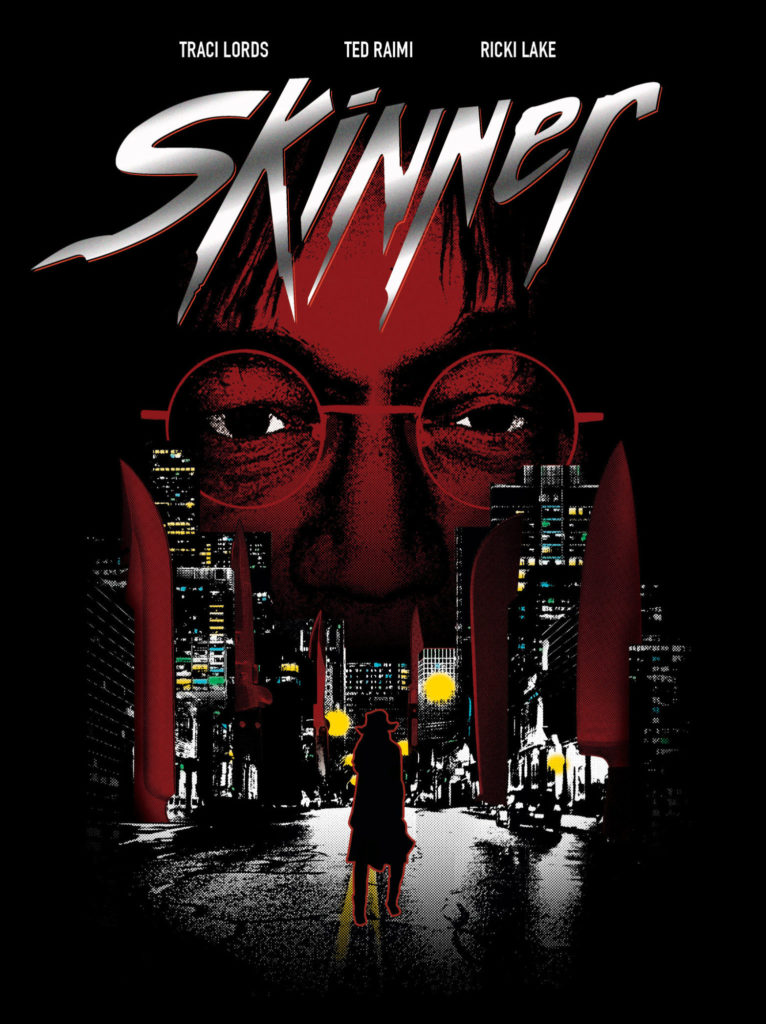 Stemming back to when I was a young video-store junkie, I’ve heard of the Ted Raimi-starring slasher flick SKINNER, mostly due to two things: its slimy, gory reputation, and its inclusion of Traci Lords, whom the genre and genre fans were enamored with during the early ‘90s. (Ricki Lake’s involvement was a novelty back then, but hardly means anything these days…unless you’re a purveyor of ‘90s pop culture.) Watching SKINNER with 2019 eyes, and coming from someone who has just seen it for the first time, I can understand why it gained such an infamous reputation upon its release all those years ago. Moments of it still seem shocking today — one absolutely more than any other, and for wildly different reasons than you’re thinking. (If you’ve seen the movie, you know exactly what I’m talking about.) However, some of it has bypassed any previous levels of bad taste and now comes across almost charming, thanks to its usage of daring practical effects and an all-around “fuck, let’s go for it” independent mentality. 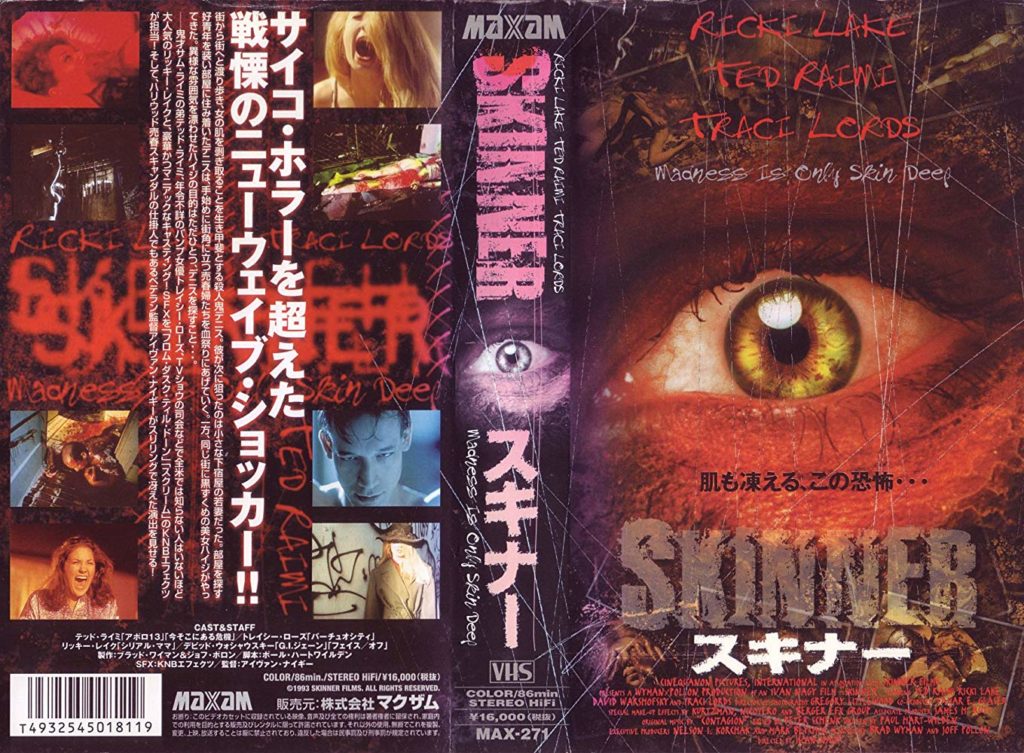 SKINNER charts the exploits of Dennis Skinner (Ted Raimi, brother of superstar SPIDER-MAN director Sam Raimi), a drifter who has a habit of hiring prostitutes, killing them dead, and skinning their dead bodies while reminiscing about his shitty childhood. One of these former streetwalkers, Heidi (Traci Lords), who previously survived an encounter with Skinner, has been hunting him down to take revenge for her mental and physical torture. Meanwhile, Skinner has rented a room from Kerry Tate (Ricki Lake) and her awful husband Geoff (David Warshofsky, an actual actor from stuff like THERE WILL BE BLOOD and LINCOLN, just to name a couple). Geoff’s job as a trucker has him on the road a lot, leaving Kerry behind to grow chummier and chummier with the aloof but innocent-seeming Skinner. (Also, I have to point this out: Laurie Strode uses the alias ‘Keri Tate’ in 1998’s HALLOWEEN: H20, so are we expected to believe that uncredited writer Kevin Williamson wanted to homage, of all things, the ‘90s video nasty SKINNER and attach it to the genre’s ultimate final girl? The world gets weirder the longer it turns.) 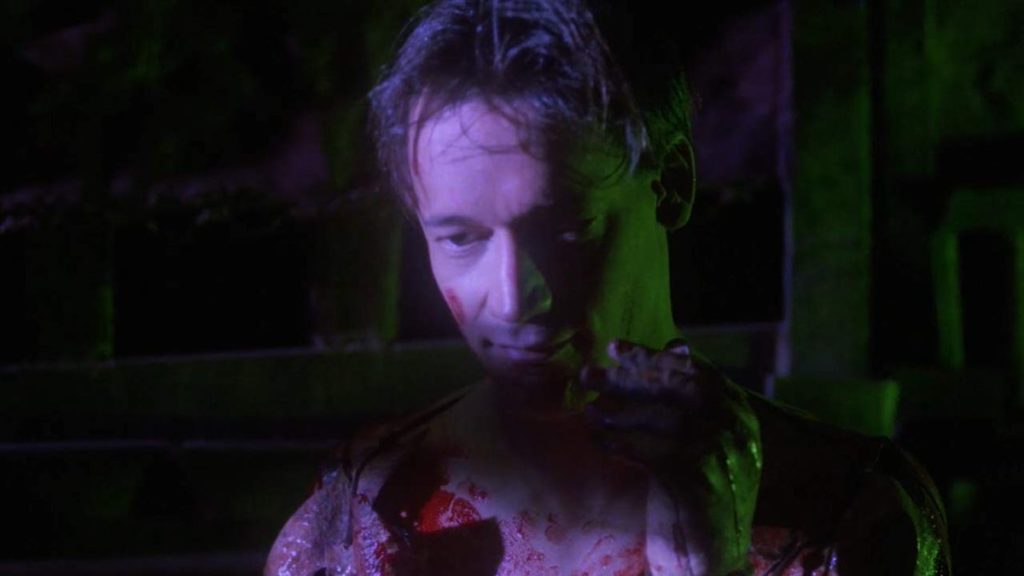 The interplay between Skinner and Kerry makes for an interesting dynamic, in that both of them are lonely souls in their own way and could potentially find meaning in each other’s company, and it’s additionally affecting that Raimi and Lake don’t look like typical movie actors – they instead look like real people, adding to the approachability of this subplot. Raimi, too, despite his history of having appeared in his brother’s EVIL DEAD series in various costumed rules, has generally made a lot of garbage, but he often proves to be a capable actor, and SKINNER is no exception. Lords’ subplot as a ruined Heidi, however, leads to absolutely nothing, which is a shame, being that the idea of Skinner’s unfinished business having potentially created its own monster could have been very interesting, had it been handled in a more assured manner. Lords gives her all in her performance as well, and though it never quite gels, in the end it doesn’t matter because it’s ultimately wasted on a go-nowhere character.

The best friend to the horror genre there ever was, Ed Gein – after inspiring the likes of Norman Bates in PSYCHO, Leatherface in THE TEXAS CHAIN SAW MASSACRE, and both Hannibal Lecter and Buffalo Bill in THE SILENCE OF THE LAMBS – has again lent his visage to Dennis Skinner. For you see, Skinner doesn’t just skin his victims, but he refashions their skin into a full body suit, leading to the astounding sequence that I wasn’t going to get into, but my lord, I think I have to. 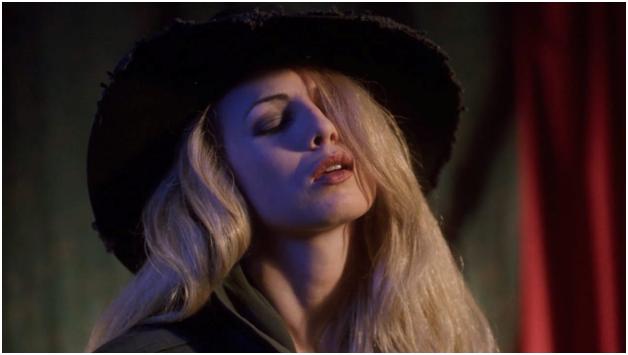 For newbies to SKINNER, feel free to skip this entire paragraph. Your viewing experience will go off much better if you’re not expecting it. BEGIN SPOILERS: At Skinner’s new job as a maintenance man, he runs afoul of a fellow coworker named Earl (DeWayne Williams), a former (and black) boxer that immediately emasculates Skinner in front of another coworker. Well, as you might expect, Earl doesn’t last long, soon finding the sharp end of Skinner’s blades. However, Skinner not only slips into Earl’s skin, but takes it one step further by turning his costume pageant into a horribly offensive display of racial monstrosity, using a “black” voice and minstrel slang like “Mammy” as he chases down his next victim. This sequence goes on for nearly ten minutes, during which you will be making the post-aftershave HOME ALONE face the entire time. END SPOILERS.

For a long time, SKINNER existed only on VHS tape and then a very underwhelming DVD housing an old tape master, which was a half-step above VHS quality. Severin has restored the completely uncut version utilizing a new 4K master scanned from the OCN, and SKINNER, whether it deserves to or not, looks fantastic. Finally in widescreen, presented in a clear and stable manner, this hideous flick looks rather attractive.  Audio is clear sounding as well, with dialogue presented front and center and free of any sibilant issues or other distortion. The soundtrack by Contagion/Keith Arem is appropriately KMFDM-ish, considering this was the mid-‘90s.

As usual, Severn have compiled a respectable amount of special features, chief among them an interview with the titular killer, Ted Raimi, who recalls a pleasant shoot despite the grisly subject matter. And yes, he talks about the sequence in question, admitting it was difficult for him to shoot at the time, and which would never ever see the light of day in a modern production. (BLOOD RAGE also gets a shout-out, which tickles me to no end, because BLOOD RAGE is amazing.) Next up is an archive interview with director Ivan Nagy from 2007, who talks about nearly his entire career, which obviously covers SKINNER. He, too, recalls a pleasant shoot but gets into a bit more of its production history. Rounding out the supplements are interviews with screenwriter Paul Hart-Wilden and editor Jeremy Kasten, and extended outtakes and the film’s trailer. (Traci Lords and Ricki Lake don’t make an appearance.) 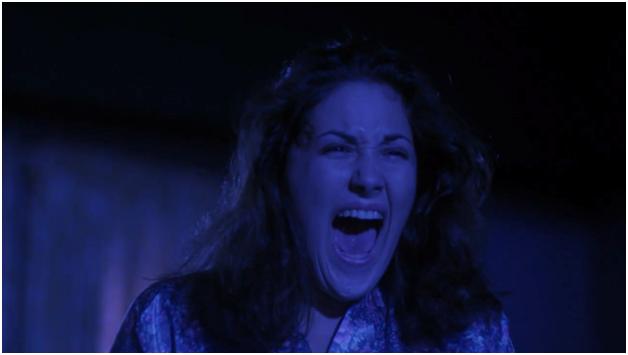 Whether you like it or not, SKINNER has been given a new lease on life with this fancy edition. Fans of the film who have been holding out hope for a HD release can breathe a sigh of relief, as Severin, who continue to grow and improve from release to release, have produced an edition that all fans will definitely want to put on their shelf. Just leave your political correctness at the door.