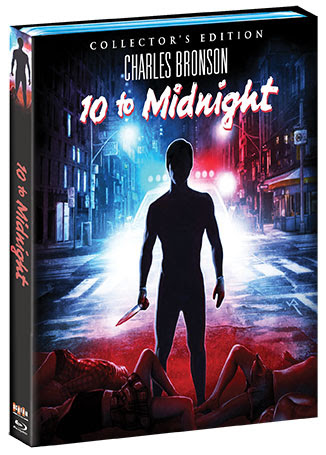 Two cornerstones of 1980s schlock provide the foundation for 10 TO MIDNIGHT, a film that feels like one of the decade’s definitive dispatches, at least at first glance. In an era when audiences routinely satisfied its bloodlust with a steady diet of blood-splashed splatter flicks and testosterone-fueled action movies, Cannon Films boldly imagined it could mash both together in a cinematic union that’s as unholy and irresistible as a Taco Bell stuffed inside of a KFC. Plenty of maniacal slashers had hacked their way onto the screen by 1983, but this one would be pursued by none other than Charles Bronson himself. It’s a match made in a grindhouse movie heaven that could only be ruled by benevolent gods Golan and Globus.

Bronson is LAPD detective Leo Kessler, here introduced in the most Cop Movie fashion imaginable: toiling away at a desk in a hectic police station crawling with weird, grungy perps and a throng of his tweed-clad colleagues. His frustration is evident, as an investigation into a rash of slayings has been futile: someone is hacking up girls, and his search hasn’t yielded the first suspect. A reporter pesters him for a statement, prompting Kessler to bellow “you want a story, but I want a killer — and what I want comes first!” It’d be grim, serious business if it didn’t usher us to a synth-soaked credit sequence punctuated with screeching guitar riffs.

Waiting on the other side of this upbeat burst of new wave is an unexpected revelation of the killer’s identity: Warren Stacy (Gene Davis) is a nondescript twentysomething man harboring a compulsion to stalk and kill young girls.  Unlike many of its slasher contemporaries, 10 TO MIDNIGHT doesn’t bother to keep its maniac hidden behind a mask; rather it allows the audience to prowl alongside Warren as he harasses a couple of girls at the Aero Theater and goes about the apparently mundane business of being an office drone.

He’s definitely disturbed, though: if his vapid, dead-behind-the-eyes yuppie face doesn’t give him away, then his twisted psyche definitely does. Flashbacks to his recent, violent exploits allow him to relive the brutal murder of a young couple and reveal the extent of his unhinged savagery. Warren is perhaps the scariest type of psychopath: one that slinks among us, largely undetected as his boyish good looks conceal his warped sense of power and privilege.

The script sharply exploits this dynamic by revealing Warren’s victim to be a childhood friend of Kessler’s daughter, Laurie (Lisa Eilbacher). Not only does this make the case more personal and urgent for Kessler himself, but it also puts Laurie and her circle of friends into Warren’s bloodstained path. 10 TO MIDNIGHT thrives on the natural tension of this situation, in the process becoming a deranged distillation of its two genres, melded together here by sweaty, high-strung cops, naked, butchered bodies, boogeyman-in-the-closet voyeurism, obscene phone calls, and absurd dialogue (“if anybody does this, his knife has gotta be his penis,” Bronson deadpans with utter conviction during an autopsy).  Other customary nonsense follows: two gags involving toast, sex atop a washing machine, other gratuitous nudity, Bronson brandishing a sex toy during an interrogation scene — at times, 10 TO MIDNIGHT strides confidently alongside the era’s goofball slasher output.

Like those films, it also tends to be a bit listless for some stretches, especially since its body count is rather meager. On the whole, 10 TO MIDNIGHT is more preoccupied with establishing its police procedural credentials, as Kessler butts heads with his partner Paul McAnn (Andrew Stevens) while they sift through sparse clues. It doesn’t quite work because the audience knows the killer is lurking right beneath their noses, though there are some nice moments that exploit this dramatic irony, like when Warren arrives at a victim’s funeral, smugly smirking throughout.

A somewhat unexpected wrinkle does emerge during Kessler’s desperate quest once he’s pinned Warren as a suspect. Rather than let the justice system run its course, he manipulates the evidence, much to the dismay of his partner. Given this era’s tendency to lionize strong-armed fascism in the DEATH WISH, DIRTY HARRY, and RAMBO sequels, it’s somewhat surprising to see 10 TO MIDNIGHT grow a conscience in McAnn, here acting as the voice of reason and putting a check on his partner’s illegal evidence tampering. After boasting so much nonsense, you don’t expect 10 TO MIDNIGHT to suddenly ruminate upon corruption in the justice system, much less point an accusatory finger at Chuck Bronson. With a Golan/Globus-produced DEATH WISH sequel behind and now well on his way to being a Cannon staple, the stalwart action star is in peak Bronson mode here: righteous, hardass, and yet somehow vaguely pitiful in his desperation to bring justice by any means necessary.

And so it’s no surprise that the film’s brief socially conscious streak is merely a prelude to a climactic reprise of the scum and sleaze expected of it.  10 TO MIDNIGHT becomes a Los Angeles analogue to the era’s New York city grime flicks here, with Kessler tailing Warren down a seedy, neon-splashed Hollywood boulevard. J. Lee Thompson’s otherwise workmanlike direction elevates with striking flourishes and panache during Warren’s final bloodbath, where an apartment becomes a gory crucible for a group of women. The camera boils the slasher back down to its primal essence, capturing shadow curtain silhouettes and slashed bodies in a stunning sequence.

Of course, the sight of a man brutalizing women is also elemental to this formula, though 10 TO MIDNIGHT (perhaps unintentionally) tackles the inherent misogyny many critics find in the slasher genre by making Warren’s own sickening hatred for women his defining characteristic. Nearly a decade before Brett Easton Ellis conjured up the ultimate Reagan-era yuppie boogeyman in Patrick Bateman,  Davis crafted this disgusting portrait of male entitlement with Warren Stacy, a man with a picturesque chiseled body but an absolute disregard for the women in his life.  To him, they are merely objects to be seduced, sexed, or killed depending on their willingness to indulge him.  By the time he’s reduced to a quaking puddle of white male privilege at the end of Bronson’s handgun, 10 TO MIDNIGHT seems to have found a maniac whose horrors are all too real and potent, especially for women victimized by this sort of misogyny. 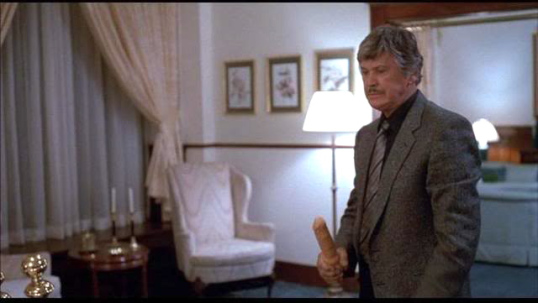 After debuting on Blu-ray as part of Twilight Time’s limited edition series, 10 TO MIDNIGHT has earned the Collector’s Edition treatment from Scream Factory, who has commissioned a new, sterling 4K transfer and an assortment of new special features. Among the new material is an audio commentary by author/historian Paul Talbott, plus a quartet of recently-filmed interviews.

“Producing Bronson” is a heartfelt remembrance from producer Lance Hool, who describes the process of shaping Thompson’s initial treatment into a full-fledged Cannon extravaganza, noting the difficulties with shrinking budgets and marketing along the way. On the whole, however, it’s a fond reflection about both Thompson and Bronson’s underappreciated talents that’s quite touching. “Remembering Bronson” is a similarly fond tribute from actor Robert F. Lyons, though his interview focuses a bit more on his co-star’s personality off-screen before some closing comments about 10 TO MIDNIGHT’s bleak ending.

Actress Jeana Tomasina appears in “Knife or Death,” where she quickly recounts her career arc that took her from Playboy bunny to Bronson co-star, all while offering some anecdotes about her appearance in 10 TO MIDNIGHT. Finally, “Charlie’s Partner” features Stevens reminiscing about his co-star, who he first starred with in DEATH HUNT a couple of years earlier.  Like the other interview subjects, Stevens characterizes Bronson as largely guarded but quite professional on-set.  He also briefly discusses his interactions with other co-stars but the anecdotes about prying information out of Bronson prove to be the most interesting here.

Scream Factory has also ported an additional commentary featuring producer Pancho Kohner, casting director John Crowther, and historian David Del Valle over from the Twilight Time disc along with the typical assortment of promotional material: an image gallery, radio spots, and a theatrical trailer, rounding out a rather thorough release. Even better, 10 TO MIDNIGHT arrives alongside fellow Cannon action-slasher hybrid COBRA, meaning Scream has dropped quite the double feature into the laps of 80s sleaze and scum enthusiasts.