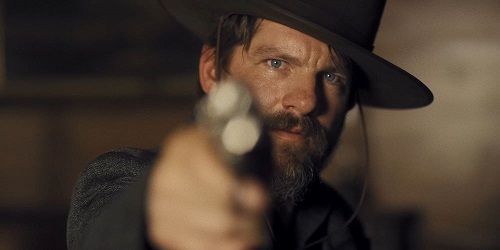 THE PALE DOOR opens with a quote from “The Haunted Palace,” the Edgar Allan Poe poem from which it lifts its title. In the final stanza of the poem, Poe writes of travellers visiting a damned valley filled with a “throng” of “vast forms that move fantastically to a discordant melody.” It’s an evocative invocation, one that foreshadows the damned souls of Aaron B. Koontz’s witchy western; however, I’m not quite sure Poe’s ominous, mournful tone quite captures the schlocky rowdiness of THE PALE DOOR. Above all, this is a boisterous mash-up that cleverly intertwines the Old West with the Salem Witch Trials to rowdy, gory effect. 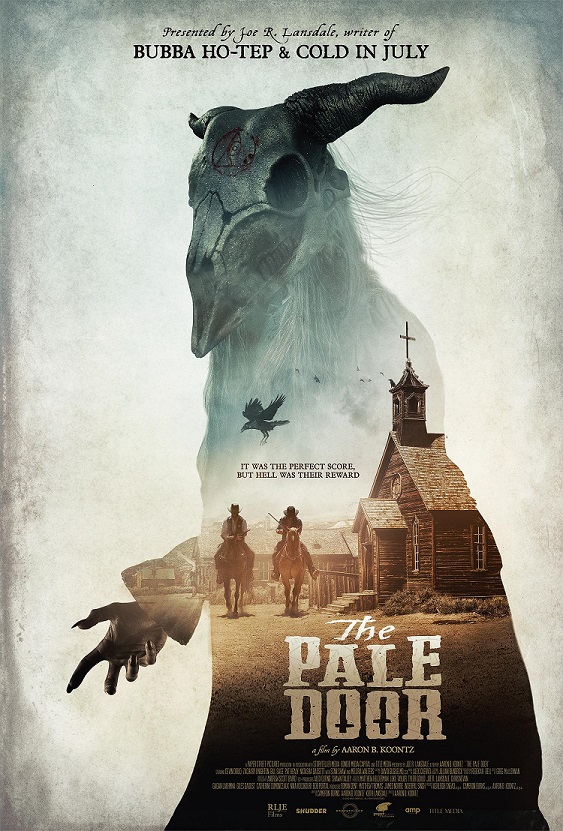 I have to think FROM DUSK TILL DAWN must have been at least a subtle influence, as this one involves a heist that goes horribly awry when its outlaws encounter a supernatural turn of events. The Dalton Gang, lead by Jake (Devin Druid), plan to rob a chest of gold from a train barreling through their neck of the woods. A heavy contingent of federal agents only further convinces them that this is going to be a hell of a score. Imagine their surprise, then, when they discover a young girl hidden away in the chest instead of gold. In the ensuing chaos, Jake takes a bullet and begins to bleed out, and he finds unlikely salvation in the mysterious girl herself, who claims the doctor in her hometown can help. With no other options available, the gang heads over to Potemkin, a mysterious, secluded village whose secrets will soon unravel this wild bunch, especially Jake’s young, much more innocent brother, Duncan (Zachary Knighton).

THE PALE DOOR has one of those great hooks you can’t believe hasn’t been explored before. Old West horror is rare enough, and the witchcraft angle is even more refreshing still. With Keith Lansdale handling co-writing duties (and his old man Joe in tow as a producer), the material takes on a pulpy tenor: this is a movie about rugged rascals running into a coven of witches, and, while Jake and Duncan’s relationship provides an emotional backbone to the mayhem, it’s mostly about the mayhem. But it’s well-orchestrated, lived-in mayhem with the sort of rich texture you’d expect from a pulp novel. One of best compliments I can pay a high-concept mash-up like this is that I’d gladly watch either of its disparate threads unwind on their own.

A conventional Western about the exploits of this Dalton gang would be fun as hell thanks to the colorful cast of rapscallions. The chemistry here makes it easy to believe that this is just the latest in a long line of Dalton heists as they spit snappy dialogue and shit talk like only pulp outlaws can. The cast is full of familiar, fun “that guys,” like Noah Segan, Pat Healy, Bill Sage, and Stan Shaw, while Tina Parker also mixes it up with the boys as Brenda, a badass who can hold her own whether we’re talking about pistols or liquor.  And while the drama between Jake and Duncan is a bit heavy-handed, it at least lends some gravitas as the older, unrepentant brother tries to steer his young charge away from this ruthless life. It’s the crucial thread that keeps the film tethered in its tempest of shlock. I simply enjoyed watching all of these guys, and, even though most of them deserve some supernatural comeuppance, it was hard not to root for their escape. 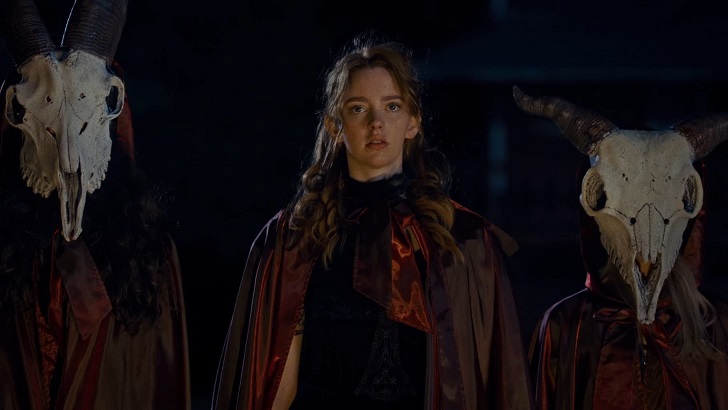 Likewise, the mythology surrounding the witches is rich in its own right. Their presence is the big mystery: the town of Potemkin is a phantasmal netherworld, haunted by fog and an impenetrable canopy of pines, occupied solely by women running a brothel. As ringleader Maria (Melora Waters, who’s having as much fun as anyone) grows a fondness for Duncan’s innocence, she fills in the details that allow 17th-century New England to collide with the 19th-century frontier. Just as I can imagine a conventional Western about the Dalton gang, I can also envision a slew of movies about this coven recurring through the ages, exacting vengeance for their persecution at the hands of religious fanatics. Unleashing them on the Old West is a particularly clever twist that allows Koontz and company to flip the script on a genre that so often confines its women to brothels or puts them in peril to drive the narrative. The tables are decidedly turned here, especially once the witches reveal their true, grotesque forms and start raising hell.

THE PALE DOOR is rather breathless in this respect. I would like to have seen it tease out its mystery and build suspense with atmospheric flourishes for a few beats longer than it does. Koontz, though, is in a hurry to paint the walls red with a flurry of shoot-outs and brawls that scratch the itch for violence well enough. With the exception of a couple of obvious digital embellishments, the gore is practically realized, if not often somehow weightless. This is especially true once the bullets start flying, mowing down the witches in rather tepid fashion. It would have been nice to see Koontz lean into the effects and craft some impressive gore showcases here, something you know he’s more than capable of doing if you’ve seen SCARE PACKAGE, a movie that’s caked in karo syrup and latex entrails.

He does reserve some nice shocks for the climax, though, when the witches return the favor by shredding through this cowboy gang. THE PALE DOOR becomes a claustrophobic siege thriller at this point, as the gang holes up in a desperate effort to fend off the bloodthirsty coven. It’s sharply realized: between this and his other work, there’s no doubt Koontz has some killer filmmaking chops, particularly when they’re paired with a solid script like this. A few stumbles down the stretch—there might be one too many weepy, confessional speeches, and the coda is a touch too sentimental — don’t completely unravel what a cool movie THE PALE DOOR is. Sometimes, movies don’t need to be much more than that: a cool idea, executed with a sharp sense of style and atmosphere. THE PALE DOOR has all of this in spades, and solidifies its director’s place as one of the genre’s most exciting emerging talents.

THE PALE DOOR is now available on Blu-ray from RLJE films. Special features include a filmmaker commentary, a making-of featurette, and a look at the film’s editing process. 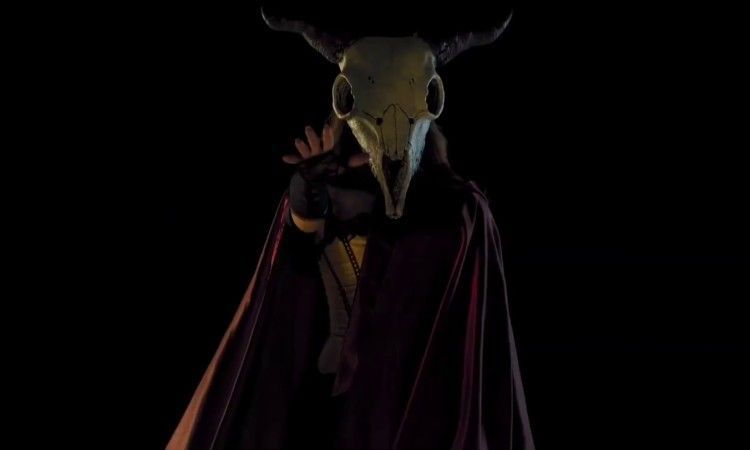