“Roll on, thou deep and dark blue Ocean—roll!

Stops with the shore;—upon the watery plain

The wrecks are all thy deed, nor doth remain

A shadow of man’s ravage, save his own,

When for a moment, like a drop of rain,

He sinks into thy depths with bubbling groan,

Without a grave, unknelled, uncoffined, and unknown.”

I couldn’t help but think of Lord Byron while watching THE BEACH HOUSE. Like so many of his fellow Romantics, Byron found nature — and the ocean in particular — to be a source of terrible beauty. Both awe-inspiring in its grandeur but horrifying in its utter vastness and immutability, the sea remains one of the planet’s great paradoxes: a source of unreal beauty yet also completely unreal in its unfathomable depths. THE BEACH HOUSE dwells on this paradox as it warps an idyllic seaside daydream into a sweat-soaked nightmare of cosmic proportions. Beautiful and haunting in equal measure, it melts the flesh and bends the mind with its suggestion that those unseen depths lurking off our coasts are capable of upending the entire globe on a whim. 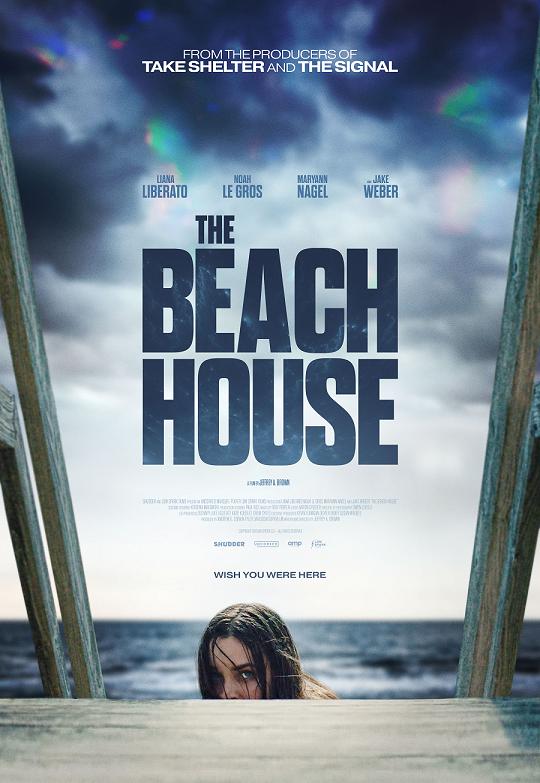 When Emily (Liana Liberato) and Randall (Noah le Gros) arrive at the latter’s beach house, they do so with the expectation that it might do some good for their tense relationship. The two have been at odds recently over Emily’s career ambitions and Randall’s lack thereof, but it’s nothing a little relaxation can’t settle. Relaxation isn’t in the cards, though. Before the couple can even settle in, the unexpected presence of another couple alarms them. It turns out that Randall’s parents told family friends Jane and Mitch (Maryann Nagel and Jake Weber) the house would be free for the weekend, making an already tense situation even more awkward. Emily and Randall stick around anyway, indulging the older couple’s idle chatter before Randall convinces them to take some edibles. While everyone is tripping, a mysterious microbe emerges from the ocean, spreading a mysterious infection that sends Emily into a panic.

For all its window dressing, THE BEACH HOUSE is about as elemental as horror films come. Much of the early-going almost feels like misdirection as writer/director Jeffrey A. Brown sews distrust with Randall’s toxic apathy and bad boyfriend energy before he makes natural suspects out of Jane and Mitch, the oddball couple who’s not supposed to be there and whose old age might foreshadow the fate of the younger couple. After all, Jane and Mitch were once young and full of life too, and presumably full of dreams. You start to wonder if THE BEACH HOUSE is going to be one of those claustrophobic ordeals where the horrors double as a crucible for a couple’s crumbling relationship, or maybe even a paranoiac thriller hinging on the older couple’s furtive intentions. But it’s decidedly not either one of these things; instead, it’s simply a movie about how nature can fuck us up whenever it pleases, reducing our bodies to sludge simply because it can. 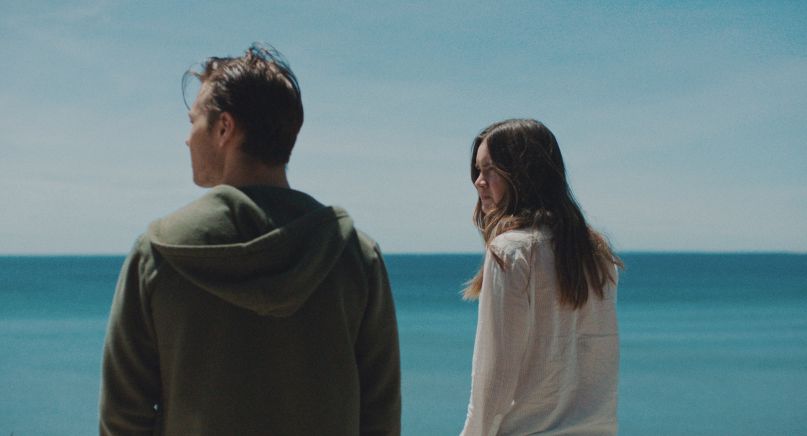 This is arguably the scariest domain of horror: the sweeping, cosmic vision of a universe that cares not for the souls that dwell within it. What’s more, THE BEACH HOUSE suggests that such terror lurks right off of our shores, hidden beneath the veneer of otherworldly beauty. Brown consistently emphasizes the contradiction between the film’s gorgeous, almost ethereal landscape and the revolting, flesh-melting horrors it eventually spews forth. There’s something captivating about the utter, eerie desolation of this location; for much of the film, our main quartet represent the only characters on-screen, and Brown highlights their isolation with long shots that highlights the ocean’s immense beauty and reduces the characters’ stature in the frame, visually foreshadowing the dynamic between mother nature and the insignificant creatures it seeks to squash. Even the microbes have an otherworldly quality as they linger about, resembling fluorescent flora as they spread an ugly, infectious disease. 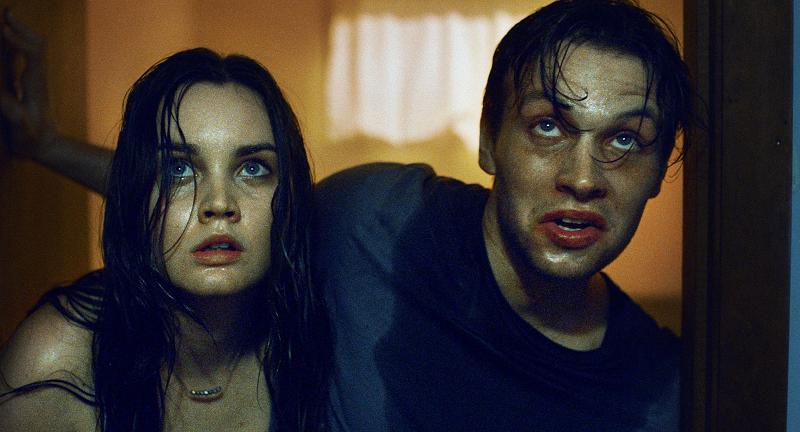 When the horrors take hold, they initially do so in visceral fashion. Wormy parasites seep into bodies, requiring squirm-inducing extractions. Characters vomit violently as they lurch about the house, bewildered and blindsided by the hostile takeover of their own bodies. They’re caught in the grips of a Cronenbergian fit of body horror that crescendos with the fleeting glimpse of an utterly inhuman transformation that’s as gross as it is inexplicable. The second half of THE BEACH HOUSE is an absolute freakout, tinted by the damp, nightmarish imagery Lovecraft often conjured from the oceanic depths. Brown’s script deftly straddles a tricky line in explaining the phenomenon: snippets of staticky news broadcasts create the elliptical impression that something has emerged from the seas, subtly broadening this ordeal to an apocalyptic scope. THE BEACH HOUSE dwells perfectly in that twilight zone of cosmic horror that gives you just enough information without explicitly spelling out everything, leading audiences to the suggestion of the twin horrors of ending and change. 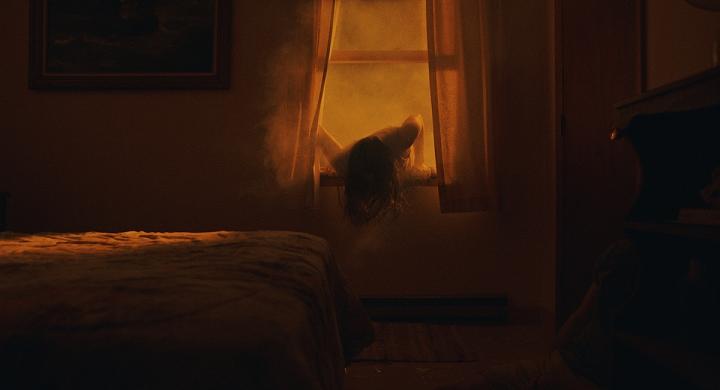 In doing so, THE BEACH HOUSE intertwines its physical horrors with an existential dread pondering the precarious order of a fickle cosmos. Unease about endings especially hangs thick in the air throughout THE BEACH HOUSE: not only is Emily and Randall’s relationship fraught with discord, but we obliquely learn that Jane is facing an unspecified terminal illness that has overwhelmed her husband. Mitch immediately recognizes the bizarre phenomena as a chance at release; Emily, a chemistry major fascinated by the origin of life in the universe, remains ever dogged and insists on finding order in this newfound chaos. Liberato’s wonderfully pitched, naturalistic performance is instrumental in capturing the maelstrom of confusion and horror unfolding on this seaside. Her plucky resolve and persistent curiosity become the disease’s biggest litmus test. While everyone around her physically devolves, their flesh melting and mutating, Emily’s doggedness similarly withers with each new cosmic curveball before she must finally relent to the bleak reality of the situation.

A dinner table conversation early in the movie all but foreshadows Emily’s journey towards oblivion. She theorizes about the origins of the planet, imagining a situation where just one of the crucial elements for life wasn’t present, leaving Earth as simply a swirling mass of liquids and gases. Brown’s camera lingers on the scattered remnants of Emily’s plate, drawing a parallel between these half-eaten scraps and the order of the universe itself. THE BEACH HOUSE ultimately provides the same reminder as Lord Byron: humanity’s place on earth is precarious, its works just waiting to be ravaged by the unseen, untamed forces simmering in the sea, ready to reduce us to a primordial swirl as something else takes our place. The film’s final shot cryptically suggests we need not fear this; it’s simply the order of things after all, the eternity and immensity of the sea the lone constant.

The image of Eternity,—the throne

Of the Invisible! even from out thy slime

The monsters of the deep are made; each zone 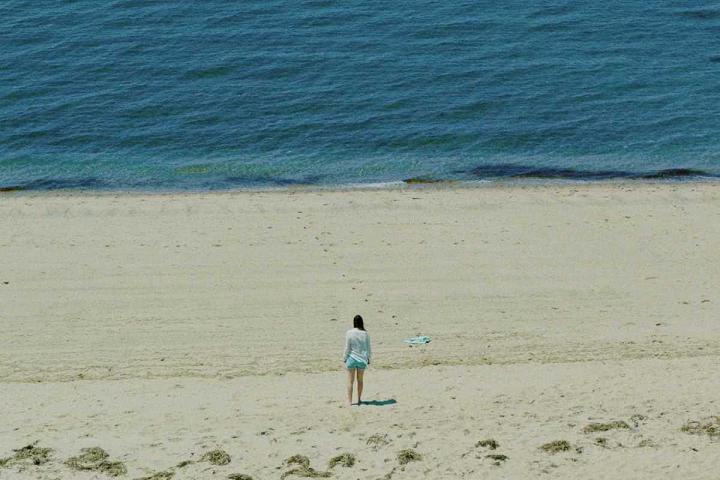