Beauty comes in many forms: a painting in a museum, the perfect day, that cutie at the bar in the black shirt nursing an old-fashioned, ninety tense and bloody minutes of pure escapism from Ryuhei Kitamura… DOWNRANGE is a self-confessed return to ultraviolent form from the director of NO ONE LIVES, ALIVE, MIDNIGHT MEAT TRAIN, the cutscenes of METAL GEAR SOLID: TWIN SNAKES, and the king of Japanese zombie flicks, VERSUS. His last movie, LUPIN THE THIRD, was a family-friendly affair that adapted one of Japan’s most popular series. To wash the dirt off– or rather, to scrub the dirt on, Kitamura decided to take a deep-dive into the kind of cinema that brought him to the world’s stage. He asked the co-story writer of LUPIN, Joey O’Bryan, to help. This team-up is interesting because VERSUS appeared at the same TIFF as O’Bryan’s first movie, FULLTIME KILLER. Wanting to make a horror movie yet not being afraid of much, Kitamura had a hard time of finding a proper monster. One of the tricks of a good horror movie is the creative team putting in things that scare them. His favorite horror movie is A NIGHTMARE ON ELM STREET and as awesome as his taste is, I doubt he wanted to be derivative. O’Bryan suggested a sniper, which worked perfectly for Kitamura. Sadly, we have a recent reminder of why they also work for us. But this is an article about escapism, not society. One thing that separates action and horror movie greats from everyone else is knowing that it’s not just about action or horror. John Woo understands it, James Cameron understands it, Wes Craven understood it, George Romero understood it, and Ryuhei Kitamura understands it: emotion. Violence means nothing if you don’t care about the people inflicting it or being inflicted. The greatest example of this in Kitamura’s filmography is SKYHIGH, about a woman killed on her wedding day who has to decide whether to linger, to move on, or to get revenge. A director who didn’t understand emotion couldn’t make that nearly as well as he did. Ditto his latest movie. 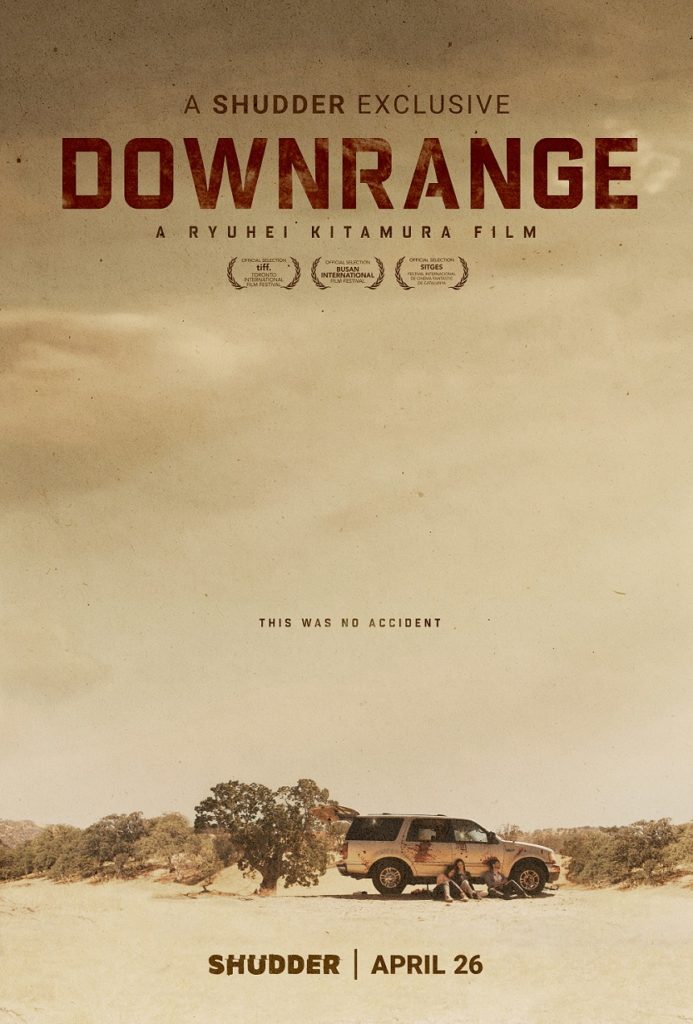 DOWNRANGE starts with a group of strangers carpooling through the middle of nowhere, desert-style. Their SUV pops a tire, and we’re introduced to them as the boys take the challenge of the girls to fix it under a certain amount of time. The usual group of twentysomethings you find in a situation like this, but this is a Kitamura movie so “usual” doesn’t stay that way for long. Two things stood out to me before chaos descended. One was that the cast was a little more diverse than you see in movies, gender- and race-wise. The other was that Kitamura really stretched the taffy, in a good way. You got to know everyone, you see that it’s more or less a dead zone as far as other cars and phone signals are concerned, you saw how barren the landscape is and got a good sense of geography, and you’re given no hint as to when the hammer would drop. When it finally did, it happened to the two people you’d bet your life on that they’d survive. Thus began O’Bryan and Kitamura’s game with us, and the sniper’s game with his prey. The group only had two places to hide behind: the SUV and a log. Kitamura reminded us throughout that neither were very good and that the only reason they worked was because the sniper’s a sick fuck. There were parts that reminded me of FULL METAL JACKET, when Eightball and Doc Jay are used as bait by a sniper. If you’re gonna borrow, do it from the best, right? So the hammer dropped and Kitamura went from stretching taffy to nailing you to your seat. It was clear that he was having fun with the genre and enjoying being freed from the restraints of “tastefulness” that LUPIN shackled him in. All the while never forgetting about the characters and keeping them from being stupid. The situation they’re in was high-stress, to put it mildly, but you never sit back and think, “…the fuck are you doing?” Lots of “Don’t do that!,” but the two are worlds apart. That mindset takes you all the way to the end and that unforgettable final moment.

John Carpenter has rightfully gotten a lot of praise for his scores and for the speed in which he created them. But we as fans of cinema shouldn’t forget that a thought-out score should be just as respected. In his third collaboration, Aldo Shllaku was brought in at the conception of DOWNRANGE. Because of that, he had months to work on the score instead of weeks that a usual composer gets or days that Carpenter gives himself. Shllaku wanted to make the sniper’s gun part of the score and knew he needed multiple rifles to be interesting, which excited Kitamura. Shllaku wanted the terror, not the sniper, to be the priority in scoring. He then focused on three elements: melody material, textures for harmony, and the rhythm section. The gun sounds were used for rhythm, obviously. For melody, he used a seven-note bit of serialism (“A form of music based on repetition or the use of series in composition, such as repeated rhythms, timbres, or pitches.”). Basically, he took the letters in the title, assigned notes to four of them (D, A, G, and E), and figured out O, W, and N with calculus. Whatever works, right? Harmony was built by way of Kitamura and three cast members: Stephanie Pearson, Rod Hernandez, and Alexa Yeames. Shllaku got the four to sing the title and letters of the title in various ways, then loaded them into a synth. He feels that horror scores have almost no creative limits, and you can tell from what he did for this that he’s not paying lip service.

So what’s next for Ryuhei Kitamura? He just finished his part in the horror anthology movie, NIGHTMARE CINEMA, shepherded by horror’s ambassador to the world, Mick Garris (only a fool wouldn’t check out his podcast, Post Mortem). He wants to take a break from horror, so he’s currently working on DOORMAN, which he described as “DIE HARD with Katie Holmes.” If that doesn’t get you excited, you’re part of the problem. 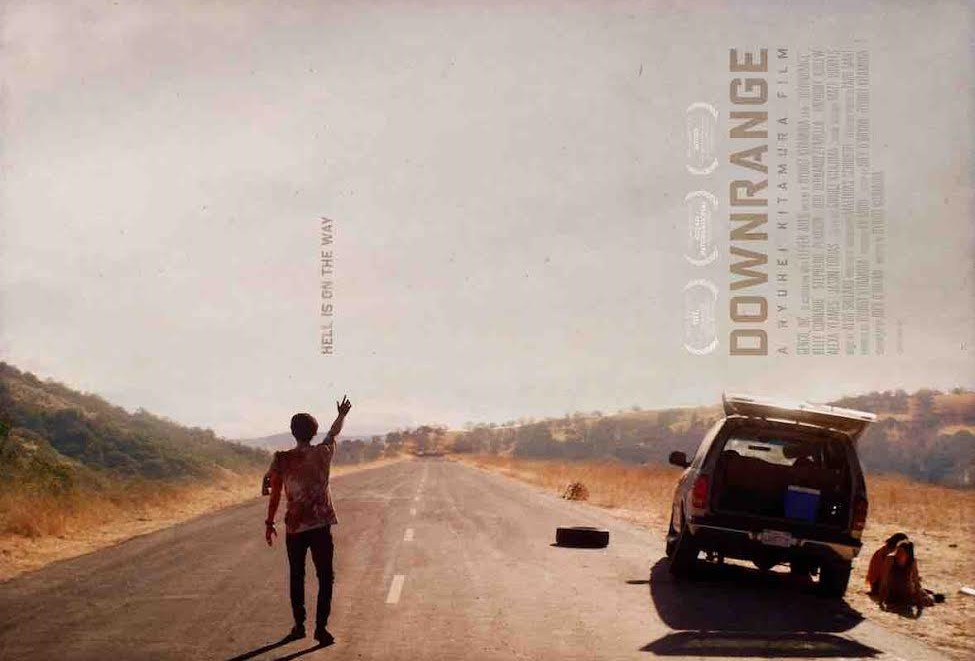