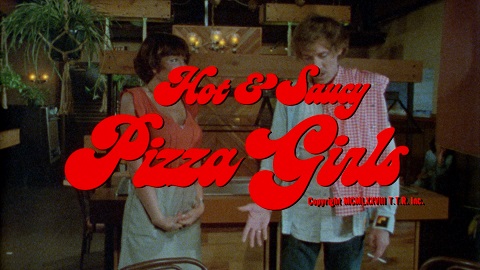 Bob Chinn and Carlos Tobalina are the two directors whose work has the most releases in the Vinegar Syndrome roster so far. Unless the latest pair of Tobalina double features are really spectacular, Chinn is pretty solidly coming out on top as far as quality and consistency of films. The latest Chinn feature to get a standalone DVD release is 1979’s HOT & SAUCY PIZZA GIRLS, a comedy starring John Holmes, Desiree Cousteau and Candida Royale. And while it’s more or less on par with Chinn’s other films released by Vinegar Syndrome, it seems like an odd choice for a standalone disc. 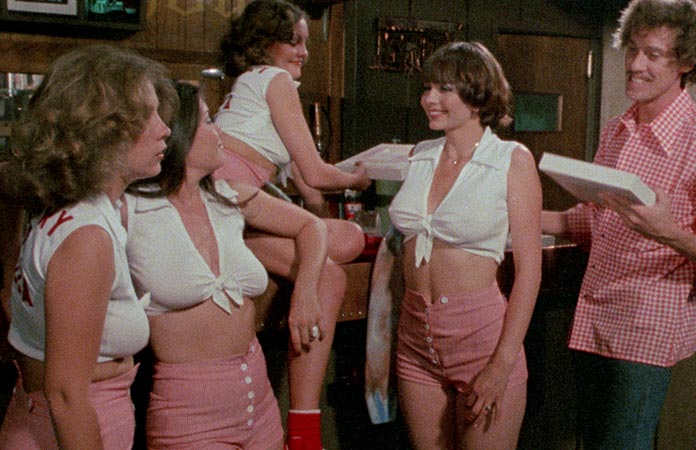 John (John Holmes) runs the Country Girl Pizza Parlor, which does actually make and deliver pizzas, although the majority of their business is sending out their delivery girls for sex. As the film opens, John hires a new girl, Ann Chovy (Desiree Cousteau). He introduces her to the other girls and they sort of give her a quick overview of what different orders mean (“Bell pepper, bell pepper,” for example, is a housewife looking for a girl for sex) before she’s on her way to her first order. Somewhere across town, Henry (Paul Thomas) and his business partners hire the Country Girls to examine the merchandise, all while planning to launch a fried chicken business to compete against Country Girls. Or something. Mostly, Henry and his partners just sit around talking. But soon, one of the Country Girls is attacked (“More like raped,” she bizarrely clarifies when explaining what happened to her) by The San Francisco Night Chicken, a human-sized chicken that has been stalking the streets. John, Bob (Bob Chinn himself!), and the girls decide to take it upon themselves to apprehend the Night Chicken using the girls as bait. For the audience, Henry or his partners are the top suspects, although Inspector Blackie (John Seeman), a trenchcoat-wearing detective determined to shut down Country Girls, could just as plausibly be the culprit. Will the girls stop the Night Chicken before he strikes again? Will Blackie shut down the Country Girls operation? Will Henry and his partners ever actually do anything other than hire girls for sex and hang out in their apartment?

Bad news if you like your stories tied up neatly: most of those questions don’t really matter and are barely addressed in the film, which abruptly ends at about the 70-minute mark. Naturally, most of this slim running time is made up of sex scenes, leaving the slight plot barely enough time to complete one of its main threads before the end credits start rolling. HOT & SAUCY PIZZA GIRLS is not a film that one looks to for technical excellence, but while it’s perfectly competent, it has virtually none of the cinematic flair of Chinn’s better work. No doubt anyone who saw this during its theatrical release or on home video probably remember it fondly, but despite a few decent jokes, not much that happens outside the sex scenes is all that memorable.

As always, Vinegar Syndrome nails the presentation: restored from the 35mm negative, the film looks and sounds better than it ever has on home video. The disc includes a trailer for the film and an interview with producer Damon Christian that runs a little over 11 minutes. It seems most likely that the film was given its own standalone disc release due to its reputation among fans more than its relative quality to Chinn’s other work. It’s not bad, and established fans will be ecstatic to have such a nice-looking edition of the film, but as an overall package HOT & SAUCY PIZZA GIRLS doesn’t quite deliver as much as we’ve come to expect from Vinegar Syndrome.