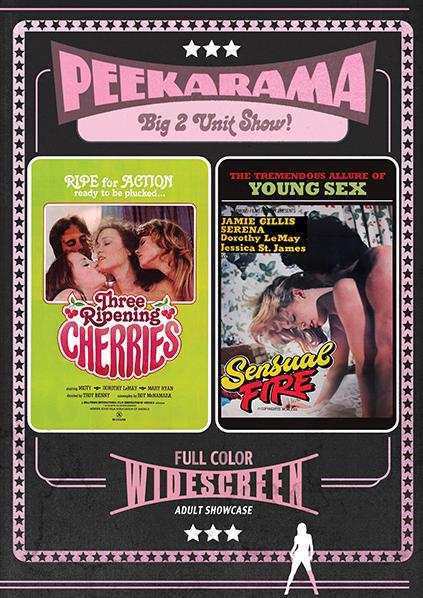 Carlos Tobalina made a lot of hugely successful adult films in the 70s and 80s, so it makes sense that Vinegar Syndrome have released over a dozen of his films in both double features and as standalone discs. They probably sell pretty well, too, since many of them feature big-name adult stars of the era such as Serena, John Holmes, Jamie Gillis, Dorothy LeMay, Paul Thomas, etc. etc.

SENSUAL FIRE opens with some crazy lens flares and some very exciting library music, which is sort of totally inappropriate for the comparatively subdued action that follows. Roy (Jamie Gillis) invites his lover Laura (Jesie St. James) and her daughter Teena (Dorothy LeMay) to move in with him. Unfortunately, Roy quickly becomes obsessed with the beautiful Teena, and consults a psychiatrist friend who refers him to Madame Rose. Madame Rose runs a brothel catering to very specific requests, and after Roy drops by and has sex with the secretary (Serena) while the other girls sit around looking bored, he believes his problems are over. Then he spies Teena through his office peephole again, and it’s back to the drawing board.

Unlike most of the recent Tobalina releases, SENSUAL FIRE features no lengthy orgy scenes. It’s even edited in an order that makes sense, with events happening in coherent, chronological order, and without too many repeated ad-libbed lines! Tobalina himself makes an appearance in SENSUAL FIRE as a priest (seriously) who suggests that Roy should visit Madame Rose again when his lust for Teena returns. The priest also figures out that Roy is obsessed with the girl because she looks like a girl he had a crush on in high school but never had sex with. Despite Madame Rose providing Roy with an exact double of Teena (the double also played by LeMay), Roy finds his desires unsatisfied and comes up with a plan to fix the problem for good. The film ends with a predictable punchline that Gillis tries like hell to sell, but which still falls flat due to its forehead-slapping obviousness.

Finally, UNDULATIONS shows the audience a broadcast of a public broadcasting show called “Undulations,” hosted by May Lin (er, Mai Lin), Georgia Drugg (Suzanne French), and Maggie Miller (Kitty Shayne). The show is mostly made up of the women talking about sex, which is handy since their guests are Jamie Gillis and John Holmes. There is also some footage of a gay pride parade, but gay rights are quickly dismissed as not being as important as some other junk these women want to talk about. Which is just more sex. UNDULATIONS is a completely plotless string of sex scenes, barely connected with footage of the “show” and padded with some pointless shots of a man and a woman in their respective homes watching the show and presumably becoming aroused. The film expects us to guess this because they make faces that look vaguely surprised and just this side of “not asleep” every so often. Hilariously, UNDULATIONS ends with a freeze-frame of the woman getting up and walking out of her room stopped at what looks like a totally arbitrary point, and then the credits roll.

Compared to the other filmmakers whose work Vinegar Syndrome has released, Tobalina’s work is easily the weakest from a technical standpoint. More often than not, Tobalina seemed content to hire a bunch of people to have sex in front of a camera, while he took tons of footage and later assembled films out of it hodgepodge with unrelated footage shot later. Regardless, Vinegar Syndrome gives his films the same respectful and careful restoration they give all others, and these discs are no exception. All four films have been restored from their original 35mm camera negatives and feature theatrical trailers for both films on each disc. While it is obviously a part of Vinegar Syndrome’s mission to save these films for posterity, Tobalina’s films are consistently the least cinematically interesting films in their lineup. Diehard Tobalina fans and fans of the actors included in these releases will want to add these discs to their collections, but anyone else will be fine giving them a pass.