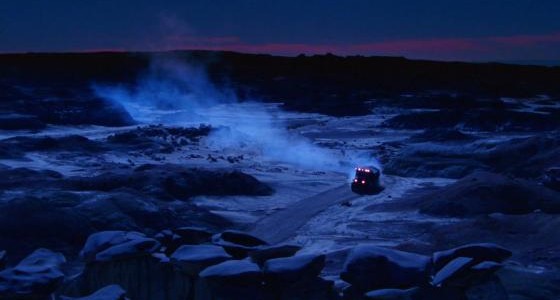 Here at Daily Grindhouse I’ve been doing a weekly column on the newest DVD and Blu-Ray releases, which I enjoy doing because as random movies find their way to the newer formats, I get the chance to reflect on movies which I otherwise never would have written about.

SORCERER isn’t like that — SORCERER is a movie I would have wanted to write about as soon as the beautiful new Blu-Ray edition hit the shelves. The movie has been on DVD before, but it has long deserved far better treatment than it’s been given. Filmmaker William Friedkin worked for months and years to get his under-seen classic out in the best possible picture quality. Now that it’s ready to be seen, there have been beautiful restoration screenings at better repertory houses across the country. One of those is the BAMcinématek in Brooklyn, where SORCERER is screening today at 4:30 and 9:30pm as part of an epic John Carpenter career retrospective.

Clearly, SORCERER isn’t a John Carpenter film, but Carpenter cites the urgent, eerie, driving Tangerine Dream score as highly influential upon his own composing efforts, and he has selected Friedkin’s film as one of the three pictures by other filmmakers to play during this two-week tribute to his own work. The following is what I wrote for the weekly column.

The 1970s were arguably the artistically important decade in American film history, the place in time where Old Hollywood and New Hollywood intersected, featuring the last films of many of the canonical directors and the first films of their inheritors. Blockbusters and ‘blaxploitation’ were born in the 1970s, and the boundaries of propriety and expression were tested by the introduction of nudity and profanity and the integration of politics and unprecedented moral ambiguity. The horror film hit new hellish heights throughout the decade. Maybe the most important trend was the personalization of mainstream films. Filmmakers such as Clint Eastwood, John Carpenter, Martin Scorsese, Sam Peckinpah, George Romero, Jack Hill, Francis Ford Coppola, Wes Craven, Steven Spielberg, Sylvester Stallone, John Landis, George Lucas, David Cronenberg, and Jim Henson emerged as resonant voices whose films were invariably distinctive. Individuality was present in the films of the Old Hollywood, of course, but you had to squint a little more to catch it back then. On the other hand, there was no mistaking the sui generis nature of the intensely-felt films of the 1970s. And William Friedkin’s SORCERER is a film that deserves the hallowed reputation of the great films from that era.

For one thing, Friedkin had already made two immediately influential films that decade, 1971?sTHE FRENCH CONNECTION and 1973?s THE EXORCIST. Both were unlikely hits but both became sensations, and their respective effects on the crime genre and the horror genre, respectively, have lasted to this day. SORCERER, however, is a film that seemed lost to time. Released on June 24th, 1977, it was a small ship washed away in the tidal wave of STAR WARS, released on May 25th of that year. SORCERER was a small-scale, intense, and very dark film in comparison to STAR WARS, but then it would be that in comparison to very many films. Filmed in part in France and Israel and largely in Latin America, SORCERER is a bleak thriller in the mode of Henri-Georges Clouzot’s 1953 classic THE WAGES OF FEAR. Friedkin hired Walon Green, screenwriter of Peckinpah’s THE WILD BUNCH, to craft the script, which concerned four international rogues hired to drive trucks carrying nitroglycerin through the dense jungles of South America, an extraordinarily dangerous job which pits them against the elements, the landscape, and each other.

The cast features all-American Roy Scheider (Chief Brody from JAWS), France’s Bruno Cremer, Francisco Rabal from Spain, and Moroccan actor Amidou. By all accounts the shoot was remarkably arduous — in his autobiography Friedkin invokes Werner Herzog’s film FITZCARRALDO, a film from five years later more famously focused on madmen on mad missions in the jungle — and there were many factors which threw audiences, including the lack of an A-list star (Steve McQueen was sought for Scheider’s part), its then-unusual electronic soundtrack from Tangerine Dream, and the confusion around its title (which comes from a 1967 Miles Davis album that inspired Friedkin). The financial failure of SORCERER‘s release, along with a highly misguided critical response, basically derailed Friedkin’s career as an A-list director. He never stopped making films — and several great ones! — but these days he is rarely mentioned alongside the big-name auteurs who were his contemporaries.

That is an oversight. 2007?s BUG and 2012?s KILLER JOE proved that William Friedkin remains as vital and bold a filmmaker as any, be it the 1970s or the decade we are in today. Few filmmakers of any generation have made even one film as good as Friedkin’s handful of stone classics. His work is uncommonly vibrant, vigorous, and challenging. SORCERER is no exception. In fact, it is the ultimate example of what this terrific director can do. Friedkin’s compositions, and the work of cinematographers John Stephens and Dick Bush, make this late-1970s film look and feel like it could just easily have been a film made ten years later, or even twenty. Its look is unusually vigorous, visually speaking. For years SORCERER has been relatively hard to see (in every sense of the term), but thanks to Friedkin’s  hard-won efforts, a restored, remastered edition of the film is finally out on Blu-Ray from Warner Brothers. Buy it sight unseen if need be.