Of all the filmmakers whose work has been released by Vinegar Syndrome, Carlos Tobalina is the most well-represented. With the September release of the Peekarama double feature of LUST INFERNO and MARATHON, the total number of Tobalina’s films released on DVD by Vinegar Syndrome comes to 27. No other filmmaker is anywhere close: they have only released ten films by Bob Chinn on Blu-ray and DVD. Tobalina is a divisive figure among Vinegar Syndrome fans, and in previous reviews of releases of his film I have suggested that his work is probably the least interesting of any of the adult films that Vinegar Syndrome has released. Tobalina was successful and worked with many popular adult film stars of the ’70s and ’80s, but his films are uniformly slapdash and frequently incoherent. They are, in short, probably the most reminiscent of cheap modern porn features, often featuring threadbare plots to string together lengthy sex scenes. Over the last several months, Vinegar Syndrome has released three Peekarama double features of Tobalina films (and a fourth in September). Here’s a rundown of what each of those releases has to offer.

In ANTICIPATION, newlyweds Jerry (Jesse Adams) and Joyce (Sheila Parks) check into a hotel for their honeymoon and Jerry tells Joyce how his brother Steve (Joey Silvera) ended up in jail. Steve was framed for murdering his wife Wendy’s (Karo Akamoto) lover, but he’s been released just in time to move back into their parents’ home along with Wendy, Jerry, and Joyce. As soon as they meet for the first time, Steve and Joyce and Jerry and Wendy are all instantly and powerfully attracted to one another, indulging in explicit sexual fantasies while lounging on the beach. Jerry and Steve consider divorce, but a Halloween costume party allows them to act out their fantasies and they all live happily ever after.

In FLESH POND, two escaped convicts happen upon a swingers’ party at an isolated ranch. They force the attendees to perform sex acts at gunpoint, including a female performer who does some of her act with a terrifying life-size sex doll named Johnny. One of the swingers, a magazine reporter (William Margold), believes the men when they say they’re innocent, and Carlos Tobalina (as himself?) learns from a friend that the men would have been released on the strength of new evidence in their case if they had not escaped. Carlos visits the ranch and explains the situation; the magazine writer offers to buy the rights to their story and write it up. The gun-toting convict puts away his gun and finally joins the orgy. Nobody seems too sore about being held at gunpoint and forced to do sex stuff.

Next is MY SINFUL LIFE and LAS VEGAS GIRLS (both 1983). Tobalina has exhibited a predilection for incest in his previous films released by Vinegar Syndrome, but this time it’s the primary focus of the film.

Jill (Danielle) moves in with her Aunt Vickie (DJ Cone) to go to college, and explains to Aunt Vickie that she’s “getting tired of fucking” her parents “all the time.” Vickie is shocked by Jill’s revelations that she must have been “a baby” when she was “deflowered,” and that her parents have sex with both her and her brother Ron (Tom Byron) regularly. However, Vickie reminds Jill that she and her brother were adopted, so apparently she’s surprised but doesn’t seem think that it’s cruel and disgusting and/or realize that it’s illegal that their parents molested them their whole lives. Jill gets a job at a whorehouse run by Madame Zsa Zsa (Helga Sven), who had to give up a pair of twins for adoption twenty years earlier when her longtime boyfriend Martin was kidnapped by Pygmies and held for three years while they forced him to inseminate all their women. Ron comes to visit Vickie and Jill and Vickie catches him masturbating while reading a book, and then has sex with him. Jill and her friend Laurie (Brooke Fields) walk in on them and Laurie recruits Vickie for Madame Zsa Zsa and invites Ron over for some sex. Jill and Ron have sex with Martin and Zsa Zsa, and later Jill discovers that Martin and Zsa Zsa are in fact her birth parents. Nobody seems weirded out that they’ve had sex with their kids or parents.

LAS VEGAS GIRLS follows a pair of detectives (Dan Boulder and Karen Hall) hired by the wealthy Harrisons (Mrs. Harrison is played by Liz Renay) to find their runaway daughter. They go to Vegas and hire a bunch of people for sex parties to track her down, but it turns out she fled to Mexico. The detectives finally admit their mutual love for one another. Another happy ending after a whole bunch of previous happy endings.

SUPER SEX and PULSATING FLESH (both 1987) make up the third double feature.

In SUPER SEX, therapist Dr. Rosenberg and his receptionist are going on vacation and he brings in Dr. Stein and a new receptionist to fill in while they’re away. Stein hypnotizes his first patient and learns about her dream about her parents making love to her, and then his next patient explains a dream she had in which she possessed the body of her best friend and had sex with her friend’s husband. Stein prescribes having sex with him to cure her frustration, and when the patient returns later the new receptionist seduces her as well. Stein joins in, but the three are caught by Rosenberg and the previous receptionist. Rosenberg is convinced this is the future of therapy and fires his old receptionist, making Stein a partner in the business. Business is booming and they have sex with all their female patients while the new receptionist listens in on the speakerphone, knits, and shakes her head at their hijinks.

PULSATING FLESH tells the story of Peter Longfellow, who goes on the Joan Carson show to talk about how he impregnates any woman he has sex with. He shows clips of his filmed exploits, and two young women watching at home (on a small TV sitting on top of a much larger TV) become aroused by his stories. Peter explains that his ultimate fantasy is “two bisexual high school girls,” and tells how a rich woman made his fantasy come true (and how they were joined by the Milkman, played by Harry Reems). The two women watching at home decide they want Peter to come visit them, so they call him at the television studio–the phone on the set where the show is being taped live as Peter and Joan have sex actually rings and Joan picks it up–so he can join them after the show is done. They have sex with him and then discover that he gets every woman pregnant even if she’s on the pill and using other contraceptives. They’re kind of annoyed, and the credits roll.

As always, Vinegar Syndrome has given each film a great transfer, so they all look and sound as good as they ever could. The discs all include trailers for the various features, but otherwise there are no extras. While it’s admirable that Vinegar Syndrome is dedicated to preserving the adult film history of the ’70s and ’80s, it’s tough to imagine why viewers keep snapping up these Tobalina discs. There’s nothing in any of them that is particularly memorable, other than the creepy and reprehensible stuff, so they don’t lend themselves to multiple views for any kind of cinematic value.

Even his weirdo JUNGLE BLUE is just inept, never quite crossing the line into real cult/outsider cinema territory. Tobalina’s work is lazy and workmanlike at best, only ever distinguished by his own fetishes. In any case, by this point you’ve probably got these in your cart already or you checked out three paragraphs ago — if you’re into Tobalina, you probably already pre-ordered them all, and if you’re not these aren’t going to change your mind. 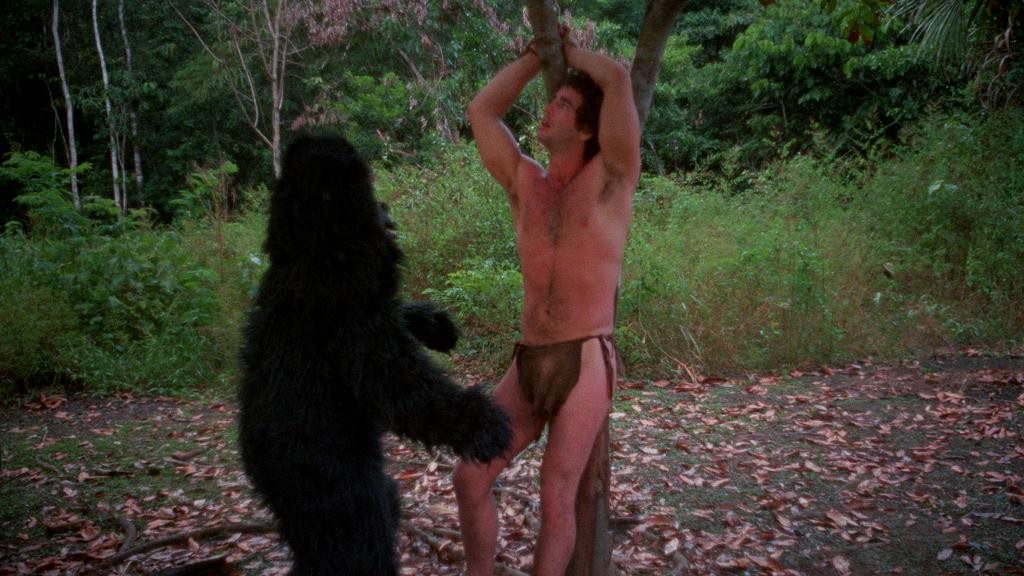