The big event movie packed with movie stars had its heyday in the 60s and 70s, and for the most part seems to have gone the way of the dinosaur (other than maybe MOVIE 43, I suppose). The adult film industry was not immune to the promise of big box office coming from a cast of recognizable faces in one film, as evidenced by the existence of DRACULA SUCKS. Directed by Phillip Marshak (maybe best known to cult film fans as one of the directors of NIGHT TRAIN TO TERROR), DRACULA SUCKS brings together several of the biggest adult film stars of the 1970s for a goofy take on the familiar story of Dracula. The result is… unexpected.

Irene Renfield (Pat Manning) brings her son Richard (Richard Bulk) to a mental institution for treatment of recurring nightmares involving his father. The hospital is run by Dr. Arthur Seward (John Leslie) and his sister Sybil (Kay Parker), and Seward hopes his visitor Dr. Van Helsing (Reggie Nalder) might be able to help Renfield. Also working at the hospital are doctors Peter Bradley (Mike Ranger) and John Stoker (John Holmes), and for some reason also hanging out all the time are Jonathan Harker (Paul Thomas), his fiancee Mina (Annette Haven), and her best friend Lucy Webster (Serena). Renfield somehow manages to escape from his room one night and wakes Count Dracula (Jamie Gillis) and his vampire brides.

Things more or less stick to the traditional “Dracula” story: Dracula seduces and kills Lucy (on the toilet, rudely enough), then begins to wear down virginal Mina’s defenses by appearing to her in “dreams.” Renfield yells and laughs a lot from his cell, but does little else. Frustrated Jonathan Harker has sex with one of the hospital nurses (Seka, in her feature film debut) while Van Helsing seems more interested in prescribing enemas to all the patients than in figuring out how to stop the vampire plague that is threatening to overrun the hospital. Eventually Dracula manages to seduce Mina into joining him as Van Helsing and Harker mount their final attack on the vampire. Will they save Mina, or will she be doomed to wander the earth as a lost soul?

Honestly, the question isn’t that important. DRACULA SUCKS is far too silly to be overly concerned with its characters’ fate. There’s a lot of sex, obviously, but there’s even more awkward humor shoe-horned in wherever it will fit. Dubbed-in dialogue is the source of most of the “jokes” in the film, which mostly are on the level of adding “You schmuck” to the end of lines of dialogue or playing Renfield’s incredibly annoying laugh at inappropriate times. The editing of the film is very confusing, and a lot of the footage that one would assume would be in the sex scenes is missing, presumably to give more time to the “comedy” portions of the film. This is a serious miscalculation, given that there are almost no laughs to be had throughout the entire running time of the film. The blood effects are also pretty inept, so there’s not much in the way of scares, either.

All that said, DRACULA SUCKS looks great. With the exception of a few segments with water damage, the film itself looks very professional (cameras and lenses were provided for the film by Panavision). Vinegar Syndrome presents two different cuts of the film among a legion that have existed over the years: DRACULA SUCKS (which includes all the murders and most of the sex scenes, running 95 minutes) and LUST AT FIRST BITE (which includes almost none of the murders and much more sex footage, running 75 minutes). The LUST AT FIRST BITE cut of the film actually plays better for the most part, with scenes shown in different order that makes more sense and less of the painful “comedy” that pads out so much of the DRACULA SUCKS cut. It even includes at least one entire sex scene that is not in DRACULA SUCKS at all, and is arguably a better version of the same idea. 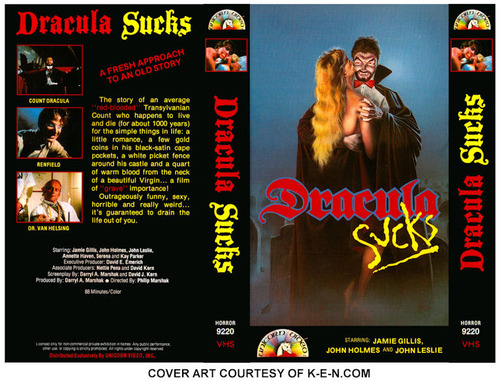 Vinegar Syndrome’s 2-DVD set of DRACULA SUCKS lives up to their high standards of presentation. In addition to the two full-length cuts of the film, the first disc includes a fun, lively commentary with actor and co-writer Bill Margold in conversation with Vinegar Syndrome’s Joe Rubin. Much like the recent Bill Lustig release from Distribpix, the set is almost worth the purchase for Margold’s commentary track alone. There is also a featurette titled “Return to Castle Hill” in which Margold and producer Darryl Marshak drive back to the castle where the film was shot (or attempt to, anyway), the film’s original theatrical trailer (which oddly features no hint that the film is a hardcore porn!) and a slideshow of German promotional art for the film. DRACULA SUCKS is an interesting relic of a particular moment in adult film history, and well worth a look for fans of the era and the members of its cast, as well as for Dracula completists.