No, your eyes are not deceiving you, that does, indeed, say AFTER THE THIN MAN. “What the hell is a who-done-it comedy film from 1936 doing being discussed on Daily Grindhouse?” Or, alternatively, you might possibly be thinking “I’ve never even heard of this movie.” Mix yourself a martini and settle in as you read about Nick and Nora Charles, one of the most fabulous couples in all of film. First, though, a little backstory.

THE THIN MAN movies are based on The Thin Man novel written by Dashiell Hammett. The book was released in 1934 (after first appearing in Redbook magazine). The book is about Nick and Nora Charles. Nick gave up his career as a private detective when he married Nora. She’s from a wealthy family (one who doesn’t like Nick one lick) and the couple spend their time partying and drinking. A murder occurs and Nick is asked to solve it. He’s reluctant but does it anyway. While solving the murder, the couple drink. A lot. What they also have, and the big draw to the couple, is a lot of rapid fire banter. Nick and Nora’s dialogue is the definition of “witty repartee.” They also have a schnauzer named Asta who runs around being adorable. 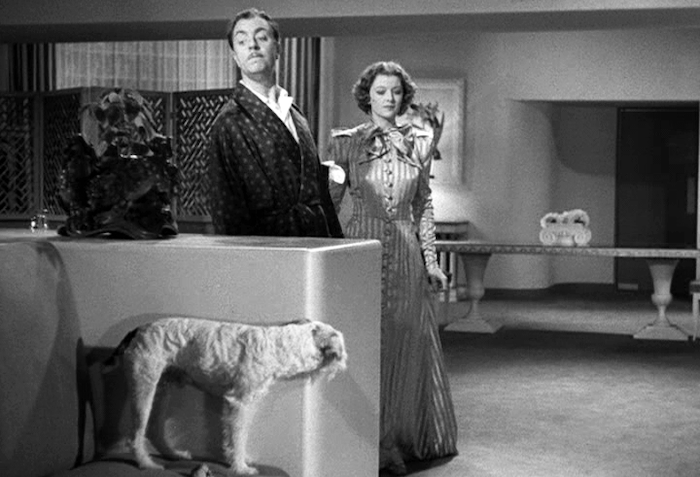 Hammett only wrote the one The Thin Man novel. The movie of the novel came out the same year. Nick and Nora Charles are played by William Powell and Myrna Loy. The chemistry between the two actors was amazing. They perfectly embodied Hammett’s mystery-solving couple and audiences loved them. Nick and Nora Charles are one of the rare screen couples, even all these 80+ years later, where we see their love for each other not by their actions but by the dialogue between them.

Directed by W.S. Van Dyke, AFTER THE THIN MAN begins with Nick, Nora, and Asta arriving home to San Francisco from New York. Their arrival just happens to be on New Year’s Eve. When they arrived at their home, they discover a raging shindig going on. Apparently, it was a surprise welcome home party for the couple. No one at the soirée seems to know who the couple are as they dance around their own house just trying to get to the kitchen. At one point, Nick is absolutely stricken when he hears someone was finishing off his stash of Napoleon scotch. It isn’t until Nick and Nora dance themselves into the kitchen that they are finally recognized by their own staff. It’s at his point when they learn they have been summoned to Nora’s family compound for dinner.

The couple put on their finery and make their way over to the Forrest Estate. Once there, Nick is treated shabbily by everyone in Nora’s family, especially her Aunt Katherine (Jessie Ralph). She thinks Nick is trash because of his Greek father and because of his previous profession. She calls him Nichol-loss and talks down at him at every turn. While at the house, Nora’s cousin, Selma (Elissa Landi), reveals her husband, Robert (Alan Marshal), has been missing for three days.

Aunt Katherine doesn’t want the police involved because she knows Robert is a philandering drunk and wants to avoid giving any stories to the press. Begrudgingly, Aunt Katherine asks Nick if he could find out what’s up with Robert without making a fuss. Here we meet a family friend, David (Jimmy Stewart), who has been in love with Selma for years, who is willing to do whatever it takes to find Robert.

Looking for Robert takes them to a Chinese club (replete with stereotypes—so be warned) where we meet several unsavory characters and it’s here where the movie really gets going. We eventually get a murder and, like in the first film, Nick decides to get involved to solve the case along with the police, who, let’s face it, couldn’t solve a case to save their souls. Nick uses all his connections to both the police and the underworld to help him gather information. 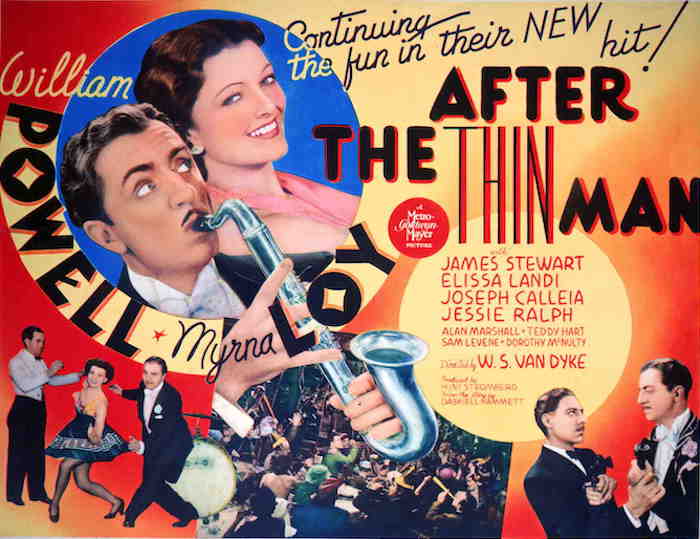 Nora is also along for the ride, as she always is. Although she stands by her man, she also doesn’t take shit from anyone. The rest of the film is taken up with wild goose chases, drinking, more murder, several red herrings, even more alcohol, and a scene (like in all of the films) where Nick gets all of the people involved in the murder mystery into one room where chaos always ensues while finally revealing the guilty party.

Although on the surface, AFTER THE THIN MAN might not seem to fit the New Year’s Eve of Destruction, but looking into the behaviors of the mystery solving couple does lend itself to the topic. THE THIN MAN films all include Nick, and by extension Nora, solving a murder (or three) all while the couple are just trying to go about enjoying life. Enjoying life, for them, is a whirlwind of dinners, drinks, and dancing. Looking back on them now, it’s pretty clear the couple, but especially Nick, is what we’d call a functioning alcoholic. In nearly every situation, he’s got a drink in his hand. Nora, too, does a lot of drinking, trying to keep up with her husband. 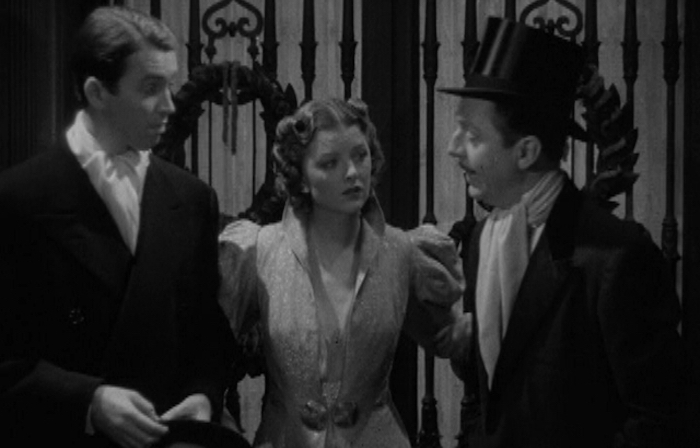 They still manage to get things done, including solving whatever murder pops up along the way. Sometimes this even happens accidentally. Part of the reason for their drinking, and the celebration of it, is definitely down to the time the films take place. After 13 long years, Prohibition in the United States was ended in 1933, the year prior to The Thin Man novel’s release. Nick and Nora, and the world they inhabit, are happy they can drink legally and do it often.

While you’re ringing in the New Year next week, why not add AFTER THE THIN MAN to your watchlists? In fact, do yourself a favor and watch the first three films of the series. My personal favorite is ANOTHER THIN MAN and I believe it’s actually the best of the bunch. My husband calls THE THIN MAN movies “screwball noir,” and I can’t think of a better way to describe them. The movies are the best of both of film styles. I’m not sure there’s a better way of celebrating the next decade with a round of drinks and falling in love with Nick and Nora Charles. Oh, and Asta.