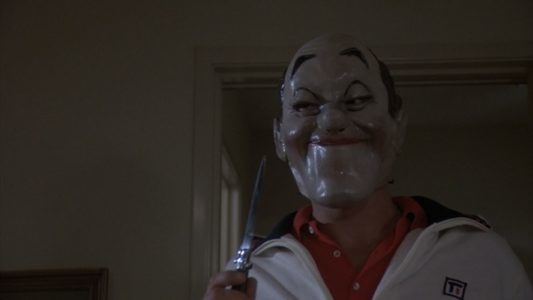 Pinky Tuscadero never quite had to deal with a New Year’s like this with the Fonz.

There’s nothing “right” about NEW YEAR’S EVIL, nothing human, nothing normal. It exists on its own plane, a place where everyone–killers and victims alike–live as strange, alien recreations of hedonistic human impulses. That place is called Cannon Films, that coke-fueled, insane home of ‘80s action schlock. Cannon was all about making spectacle on a budget, cutting corners and ramping up the sleaze and inhumanity. And their version of a slasher film is as every bit as insane, as offbeat and as abnormal as you’d expect from a factory dedicated to pumping out Chuck Norris movies.

With the success of HALLOWEEN it was largely inevitable that every other holiday would eventually become fodder for some psychopath’s bloodlust. Already have bloody valentines, prom nights, graduation days, and Christmases splashed with gore? There’s a whole sub-sub-genre to keep you covered. So of course, someone would ring in the new year with a few dead bodies, Auld Lang die-ing their way to a stroke of the knife at midnight.

Those people were director Emmett Alston and screenwriter Leonard Neubauer, the latter a veteran television writer who had been working since the 1940’s…and made NEW YEAR’S EVIL his last screenplay credit. With the slasher film still in its infancy in 1980, only just starting to codify the formulas seeded by the likes of Carpenter’s Samhain season classic and Sean Cunningham’s summertime slaughterthon FRIDAY THE 13TH, NEW YEAR’S EVIL is afforded a blessed chance to ring in a new era in refreshingly off-kilter fashion, blessed as it is by a workman old-timer’s confused attempts to meld with a then new-fangled youngster’s genre.

NEW YEAR’S EVIL exists in a realm that doesn’t know how New Wave, people, or even time zones work. It exists on it’s own planet, one largely occupied by “Evil”–or “Eeeeeeeevilllll” as his unthreateningly vocordered voice croaks over the phone–a bumbling milquetoast serial killer who’s decided to use the socially accepted time-change bacchanalia of the New Year as his excuse to commit various murders of the young blonde women who cross his path. Evil’s real target is the radio DJ Blaze (Roz Kelly, the aforementioned Happy Days greaser gal pal), a punk rock Dick Clark ringing in the holidays for her sneering Mohawked fans. Evil calls in each hour, on the hour, threatening to kill a new person as each time zone cycles its way to January 1st, leaving Blaze to be the final target once it chimes midnight, Pacific Standard Time. Let’s talk about those time zones, for a moment, shall we? NEW YEAR’S EVIL never really makes it clear whether or not it’s playing dumb with how time works or if “Eeeeeeevillll” is just right there in L.A.. picking off denizens while knifing his way to the erstwhile song jockey. Even if he is just another bobbing piece of detritus floating through the City of Angels party scene (at one point he picks up a victim by offering to bring her to a party at the home of the one and only Erik Estrada), that requires him to begin his killing spree at around 9 p.m.–and what televised New Year’s festivities program starts blowing its horns and popping its corks that early? Besides, leaving only one body an hour leaves not only quite a tiny body count for a stalk and slash epic, but plenty of time for cops to try and play catch up (good thing the ones in this film are by and large buffoons.)

It’s not a gaggle of horny teens getting impaled in the woods, but a succession of vapid, nameless side characters who meet their end at “Eeeeeevillllls” fumbling white boy hands. NEW YEAR’S EVIL deviates from the usual slasher template by spending as much, if not more time, with “Eeeeevillll” as it does with our ostensible rock and roll Final Woman, watching his attempts to draw his prey into his orbit. NEW YEAR’S EVIL doesn’t put it’s killer into a mask, instead showing Kip Niven’s handsomely chiseled WASP face in all its cheek-boned glory. But this isn’t some disturbing serial killer expose. Instead, it’s some sort of goony mutant variation on burgeoning post-Mikey-Myers cliches. “Eeeeevilll” isn’t exactly a suave monster, but a graspingly desperate schmuck, and the film’s final twist at exactly who this doofus is just kind of lands with a whiff of “duh, really?” obviousness.

Look, let’s be honest here. NEW YEAR’S EVIL isn’t a particularly good movie, and never has been considered one to begin with. What it is, is an amusingly skewed take on a then-nascent genre, owning a particular brand of off-kilter madness, made by a studio that never took kindly to matters of realism, instead placing emphasis on whatever act of wild spectacle was best seen next. “Eeeeeevilll” hangs Blaze, our passive protagonist, from the bottom of an elevator, sending her hurtling up and down the office building she’s recording from, he goes on an out-of-nowhere misogynist rant about his own emotional emasculation (he’s like a blubbering Jordan Peterson fan refashioned as Henry: Portrait of an Idiot). And did we even get to Blaze’s son, a red herring creepozoid weirdo (in a film with no mystery to the killer’s identity) who puts nylon stockings over his head…just because? NEW YEAR’S EVIL doesn’t exist on the same wavelength as most slasher films, and maybe that’s why it’s so watchable. It puts the “odd” in Auld Lang Syne.