In this series, we’re covering plenty of movies where New Year’s Eve marks the time where a lot of drama happens and, often, a bunch of people die. This is all fine and dandy, but how about a New Year’s Eve movie with maximum drama, where everybody dies? Like, not just the people in the movie, but literally everybody on the planet, at least potentially? NEW YEAR’S EVIL may cross a few time zones in order to get to the killing, but ONE NIGHT STAND basically ends time completely. 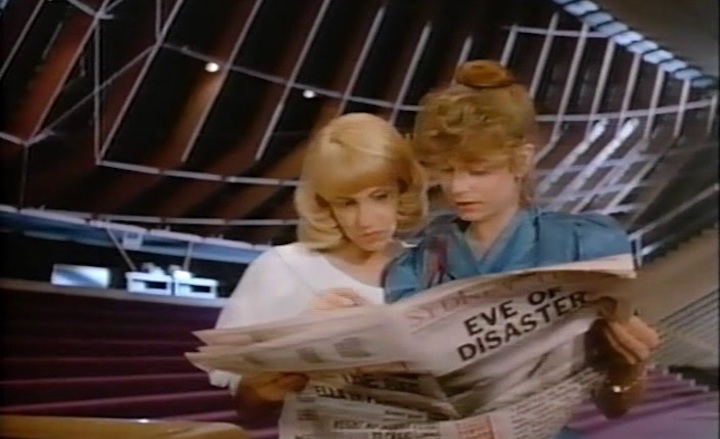 Shot in 1984—the same year that spawned similar nuclear paranoia films THREADS and MASSIVE RETALIATION and one year removed from THE DAY AFTER, TESTAMENT, and SPECIAL BULLETIN—ONE NIGHT STAND doesn’t have the scope or power of the aforementioned films, but that doesn’t mean that it doesn’t deserve a look on its own. It’s certainly not trying to be THREADS, instead placing the possibility of total nuclear annihilation in what would otherwise be a nice post-teen comedy-drama. It’s like THE LAST AMERICAN VIRGIN of apocalyptic cinema. 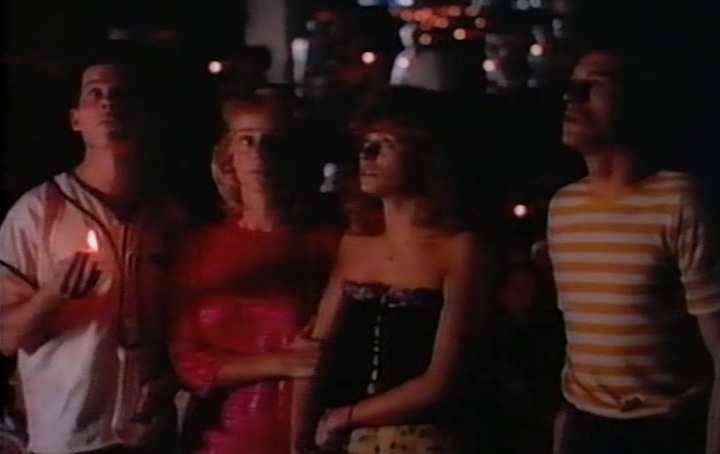 The setting itself is noteworthy, taking place in Sydney, Australia and with a good percentage of the film set inside the Sydney Opera House. The plot centers around a quartet of young people — two female best friends, a sex-obsessed janitor who opens the film by hitting on the ladies dressed as Santa Claus, and an American naval officer on AWOL from a local base after realizing that the pending war conflicts with his pacifist tendencies. (One would have thought that this may have come up when he, y’know, joined the navy, but I’ll chalk that up to unexplored backstory.) On New Year’s Eve, the group finds themselves stuck in the Opera House while the world falls to the brink of extinction. 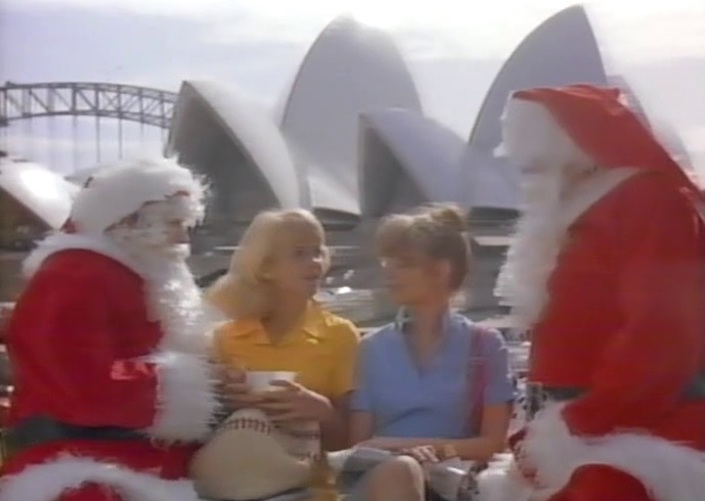 Written and directed by John Duigan, who would shortly get an art house following with the charming coming-of-age drama THE YEAR MY VOICE BROKE, ONE NIGHT STAND veers down a number of roads and, while it only occasionally feels complete, at least has the ambition to be entertainingly unique. The grouping spends much of the first half doing what most young people would do when stuck in an isolated location with little control of the larger picture — they drink, flirt, and play strip “poker.” (It’s actually “Strip Jack Naked,” but they keep calling it “Strip Poker,” which kept bugging me.) They have occasional insights into their situation as well as humanity as whole. “If there was a kid in outer space doing a school project on human beings, they’d have to say we’re all crazy” states one character. The men talk about keeping the women calm while the women talk about keeping the men from overreacting in rage. 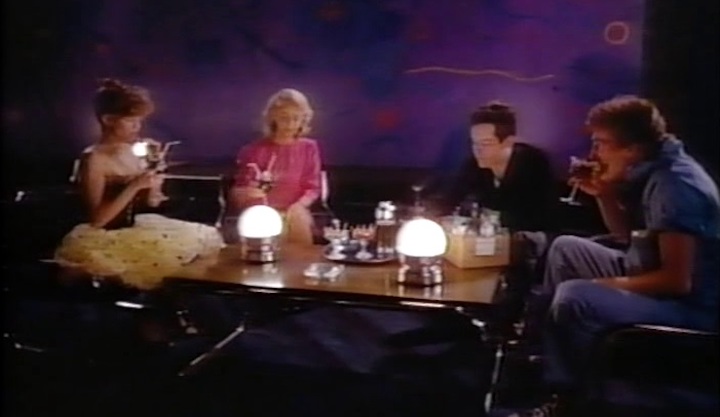 Occasionally, one of the characters will have a flashback to their lives before the night, as the realities of their situation starts to set in. These aren’t big, character-defining moments—they’re minor memories that a piece of conversation or a random object would stir up, like giggling with their sister over their mother’s hiccups or being bullied for singing. They feel like authentic moments of recollection rather than set-ups to clue the audience in to who the characters are, and the film is all the better for it.

The absurdity of their situation is mirrored in a number of moments and images that dip the film into high-concept territory. The opera house (which makes for a fantastic location) sports a group of wandering actors in costume, a similarly directionless robotic solider, and giant sets and costumes that provide an urban “Alice in Wonderland” motif and look for their “Strip Poker” escapades. One character does an abrupt rendition of a monologue from King Lear. The group decides to go outside to celebrate the new year properly, and equip themselves with umbrellas to prevent radiation poisoning. The group watches METROPOLIS on a giant screen, which makes sense conceptually with scenes depicting the downfall of a city. (The Georgio Moroder version had been released to theaters the same year.) They read their horoscopes, which doesn’t help their attitudes. 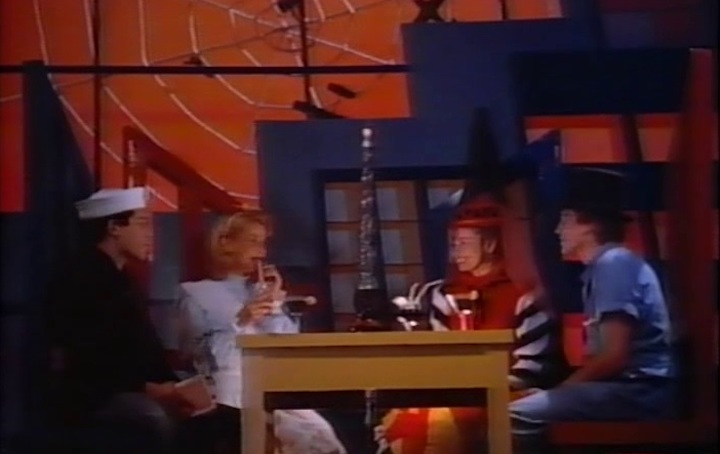 For the most part, emphasis on the potential war and the fall of humanity is left to the background, with its realities slowly setting in for the characters on screen. The film opens by cutting between an anti-American occupation protest and Sam, in his navy togs, on the American ship (as well as having the rest of the cast attending a concert by Midnight Oil, who sings the politically-minded “Short Memory”), but after this point, most mentions of the conflict are alluded to only in passing, so those who complain about “politics” in their movies should be able to make it through without whining. A television set talks about the conflict in South America to disinterested audience members who just want to hear the lottery numbers. There’s some discussion about how Sydney wouldn’t be hit because it’s not a big target. It’s all on the sidelines until the attacks actually start.

Along these lines, ONE NIGHT STAND does make an error when a television report watched by a character depicts the aftermath of one of the bombs in New York. Instead of watching the damage via television, the film cuts to the footage itself, taking us away from the distanced manner the character is experiencing it and into the carnage itself. It becomes THE DAY AFTER or THREADS for a moment, when it doesn’t need to, having carefully set up the bizarre, isolated world in which our characters are in for the time being. It’s unnecessarily distracting and pulls away some of the force that the film’s final minutes could have otherwise had. 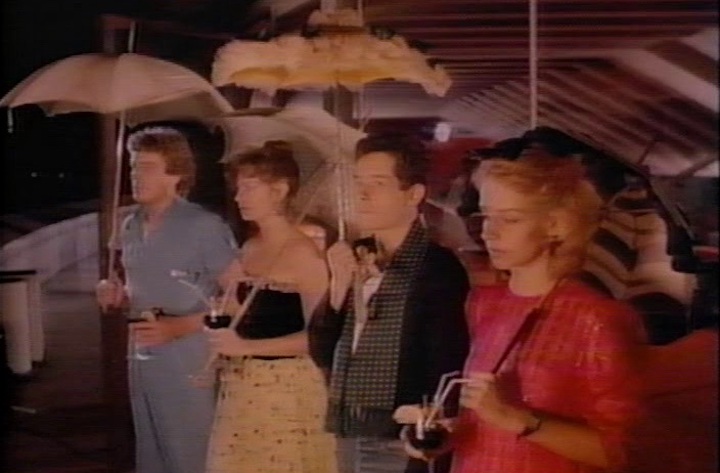 Those final minutes, where the group is jolted out of their opera house-hosted temporary bubble and forced to actively address the reality of their situation, put an exclamation point onto a wandering, if entertaining, sentence. It’s certainly a different path to take in the world of nuclear annihilation films, but ONE NIGHT STAND takes it with confidence even if the results are a little uneven.

A box-office failure in Australia, ONE NIGHT STAND was released straight to video in the United States and wasn’t re-released in any form anywhere until Umbrella issued an Australian DVD this year. It’s a shame, too, as while the film isn’t perfect and is a little scattershot to be a genuine cold war classic, it’s visually vibrant and features several good performances and more ideas than it can handle. Thankfully, Umbrella Entertainment has the rights and has at least released it as an on-demand title. The actual new year in the film happens 46 minutes into the film, so you can start ONE NIGHT STAND at 11:14 p.m. and have the biggest bummer of a new year’s evening, if you’re so inclined. 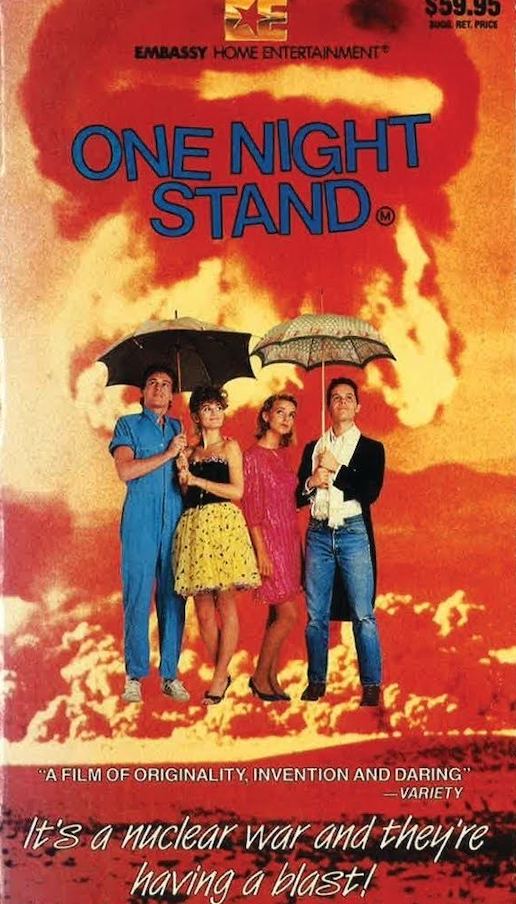