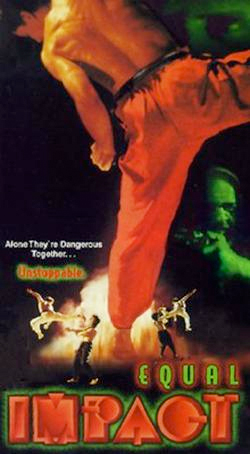 EQUAL IMPACT is an obscure VHS-only picture that I picked up because I read somewhere that it starred twin martial artists. You know, it’s like DOUBLE IMPACT except no split-screen required. You take one impact, you double it and that’s double impact, and then equal impact is equal to double impact. Also each of the impacts is equal to the other, because they are twins. And the impacts finish each other’s sentences and feel each other’s pain.

The twins are Dave (Joe Gates) and Josh (Jay Gates), who are respectively the Northwest Karate Champion and a depressed has-been who lives alone in his dusty tae kwon do studio where he is sad because he doesn’t have any students.

The two are introduced in separate incidents where they’re the victims of poor sportsmanship. First, a guy who Dave beats in the 11th Annual Northwest Karate Tournament gets mad and tries to fight him in the parking lot. Then Josh gets beat up in a bar because an asshole with a Hulk Hogan mustache and dangly earring was betting on a pool game and Josh knocked over a beer can that made a noise that allegedly made him screw up. A woman who witnesses Josh’s beating and helps clean up his blood coincidentally was also there for the other incident and is engaged to the sore loser from the parking lot. Josh doesn’t know who the guy is but still tries to guilt her out of getting married to him.

Meanwhile, Robert Z’Dar (MANIAC COP, TANGO AND CASH, by far the most gigantic chin I have ever seen or heard of) is a guy who we see smoking and drinking and stuff. Then meeting with counterfeiters and drug dealers working for Joe Estevez. He outsmarts the drug dealers by doing this trick where he brings a gun to their meeting. They didn’t think of that one so he’s able to kill them. It keeps cutting back to him, seems like he’s gonna be the big villain eventually.

(Side note: Z’Dar and Estevez are a real team. They also appeared together in SOULTAKER, THE SUMMONED, IN A MOMENT OF PASSION, THE MOSAIC PROJECT, DOUBLE BLAST, RED LINE, POINT DUME, THE SEARCHER, GUNS OF EL CHUPACABRA, FATAL PURSUIT, NO REST FOR THE WICKED, THE WATERFRONT, CRIMES OF THE CHUPACABRA, GUNS OF EL CHUPACABRA II: THE UNSEEN, MOB DAZE, ZOMBIEGEDDON, SCARY TALES: THE RETURN OF MR. LONGFELLOW, THE ROCKVILLE SLAYER, VAMPIRE BLVD., DRAWING BLOOD, VOICES FROM THE GRAVES, MELTDOWN, LA FEMME VAMPIR, UNTITLED HORROR COMEDY, NOT ANOTHER B MOVIE, LA FEMME VAMPIR VOLUME 2, LITTLE CREEPS, THE VOICES FROM BEYOND, CAESAR AND OTTO’S DEADLY CHRISTMAS, plus a short film and 3 more in the can. They’re this generation’s Martin & Lewis.)

Dave’s wife feels bad so she tells him to invite his sadsack twin to dinner. Dave goes to talk to Josh at the studio and then there’s this other coincidence where they see a guy getting chased so they try to help him with martial arts. Dave does a flying kick to a guy’s head and thinks he killed him.

This maybe should be called STUPID IMPACT because these twins are fucking idiots. They beat up these guys, and one gets shot so they make an anonymous call to the police. Trouble is, the rest of the guys are alive, and Josh steals money off of them. And he somehow drops his keys there, with a keychain with the logo of his martial arts studio, so the guys immediately come after him. We don’t know of any severe money troubles he’s having, but in order to hold onto the money he lies to his brother, lies to the cops, kicks a cop in the head, endangers two women and his brother is kidnapped and tortured and he has to fight a bunch of guys. But it’s just a packet of bills, it couldn’t be more than a couple thousand, and I’d guess less. Also it’s fake money that immediately gets traced to him when he uses it. 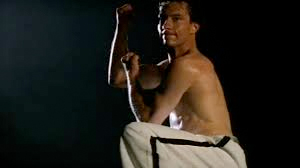 The middle part of the movie is about how Dave is kidnapped and Josh thinks he might have been kidnapped, and goes around talking to people about it but nobody is sure if he was really kidnapped or not. It makes you appreciate a ransom note, you know? This uncertainty is not very cinematic.

Josh goes to an apartment, I was unclear who he was looking for but it turns out to be Robert Z’Dar, who’s like a non-twin brother to him because “we worked out together for over 10 years” but he thought he was dead because he faked his death and changed his name. But, I mean don’t take this wrong, but if you have ever seen Z’Dar you know this guy is not gonna be able to hide out by changing his name. And it would take a hell of a fake beard to hide that mug.

Anyway, the two are united and work together to resc– oh no, Z’Dar gets shot and dies. But he did correctly guess which warehouse a kidnap victim might be hung upside down in. So he contributed.

I hate to say this but this is a terrible movie and mostly not in a fun way. Everybody is very downbeat and talks quiet and slow, which would be fine if it had some kind of control of tone and atmosphere, but that ain’t the case. The Gates brothers, while they do know how to do jumpkicks (which makes up at least 30% of their fighting), do not have any kind of screen presence or charisma. They don’t look tough, and don’t act it either. They talk very timidly and sound sad all the time. You can’t really blame the bad guys for never taking them seriously. They seem like total weiners.

It’s amateurish, but not cute amateurish. At least it’s shot on film, I can respect that. But it’s the kind of movie where the rock song on the end credits continues for 3 or 4 minutes after the screen goes black.

One thing that helped me get through the movie: I live in Seattle so it’s always cool to discover a movie I didn’t know was shot here. Most movies that take place here are actually shot in Vancouver – it’s rare that you get an independent production like this that doesn’t mention it’s in Seattle (or even show the Space Needle) but happens to be shot here. The first sign was the “Northwest Karate Tournament” at the beginning, then I noticed a boat scene was clearly shot on Lake Union. It makes sense, because director Jon Steven Ward also did LOVERS LANE  (read the review here), a 1999 slasher movie shot in the Seattle area and featuring one of the first performances by local girl made good Anna Faris. Also not very good.

The Gates twins (who are not related to Bill Gates I don’t think) didn’t ever do any other movies. According to the internet they may be involved in teaching tae kwon do in Oregon. I doubt they wanted to be movie stars anyway, they just happened to know this guy who thought it would be cool to make a movie starring martial arts twins. I’m sure they had fun. I don’t blame them. And I’ve seen worse.