For this column I try to find movies that look interesting, but that nobody’s recommended to me or told me about. I have the advantage of Seattle’s Scarecrow Video, as long as they can hang in there, because they maintain a vast collection including thousands of VHS titles that haven’t made it to digital formats yet (and might never). Even they didn’t have FIST OF STEEL (1991), a Dale “Apollo” Cook movie I was trying to watch for a fighting-tournament project I’m working on for my home base at outlawvern.com, so I ordered the one affordable copy I could find online.

The movie I watched surprised me in several ways:

1. I didn’t know Dale “Apollo” Cook was a Mexican guy with a mustache.

2. I thought this was supposed to take place in the future. The guy on the cover was wearing face paint.

3. This really doesn’t seem like it’s leading up to a fighting tournament.

4. This doesn’t even seem like it’s leading up to a guy wearing face paint.

5. Wait a minute, how did the box not even mention Henry Silva? He’s all over this movie. 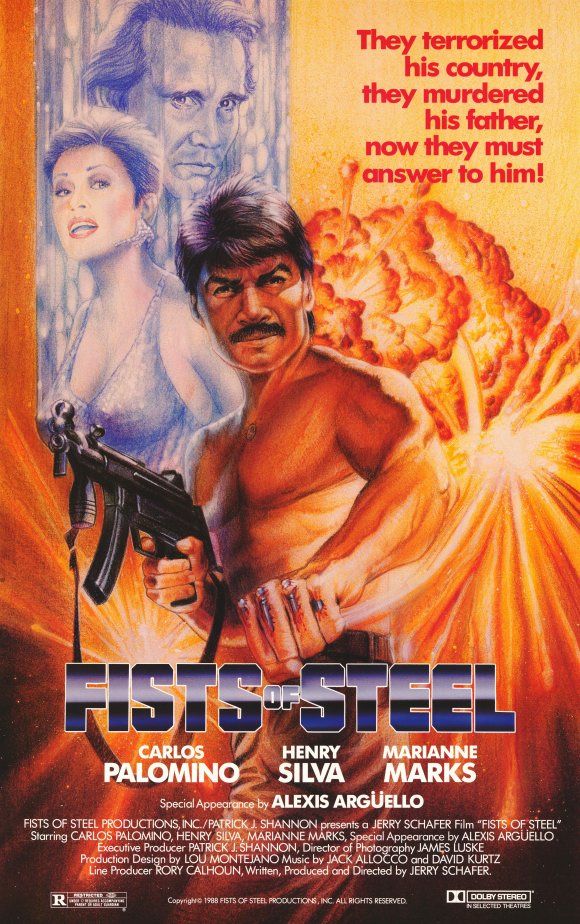 I still haven’t seen the plural one, but I’m not complaining, this was a nice surprise. It was a double-blind view, but a very successful one. The best kind of movie you can find is a good one, but second best might be a ridiculous one full of unpredictable weirdness like this. The story is about a Vietnam vet ex-boxer names Carlos (Carlos Palomino, a former WBC Welterweight Champion and 2004 inductee to the International Boxing Hall of Fame) recruited by an old war buddy at the CIA to go to Hawaii and work for a drug-dealing terrorist named Shogi (Silva), then kill him. They keep calling it “cutting off the head of the snake,” which seems to indicate that there was no reason to go undercover and pretend to work for him first. You don’t have to get a job from a snake before you cut off its head, do you? (I might be missing something; I’m not a snake beheader.)

They convince Carlos to accept the mission by showing him a film of Shogi murdering his dad. Not the best way to find out your dad has been murdered. They offer to train him for the mission, but he says he trains every day (if so it’s weird that they never once show it in the movie). They offer him a team, he says he’ll use his own connections from Mexican restaurants. This whole recruiting scene is a gold mine of funny expositional dialogue including “Just How Badass Is He?” rundowns for Shogi, his KGB agent right hand woman Katrina, and Carlos:

“Carlos, I want you to understand that the agencies know all about you. Why you quit fighting. They know about your hands. The operations. The steel joints and knuckles. Your puños de acero. Your fists of steel.”

Sady the titleistical puños de acero only really come into play one time. 38 minutes in when there’s finally a god damn fight scene he beats 3 attackers to death and the police who find the bodies assume it was done with a sledge hammer. (Which is not made of steel, in my opinion.)

This is a crazy movie, and that’s clear from the very beginning. Opening credits: Survivor-esque inspiration rock over black, cool metallic logo. First scene: Henry Silva, dressed in baseball uniform, tinkering with disco ball and lights, psyching self up to beat hostage with a bat. Second scene: Silva dressed as doctor, he and nurse torture a guy in a doctor’s office. Third scene: a little person is helping an enormously obese woman unjam her car horn, camera pans over to crowded park where a guy gets stabbed. All this before they introduce Carlos, who is making chili while his daughter watches a video about rope tricks and looks at his scrapbook of photos from ‘Nam. So it takes a while to get your bearings. 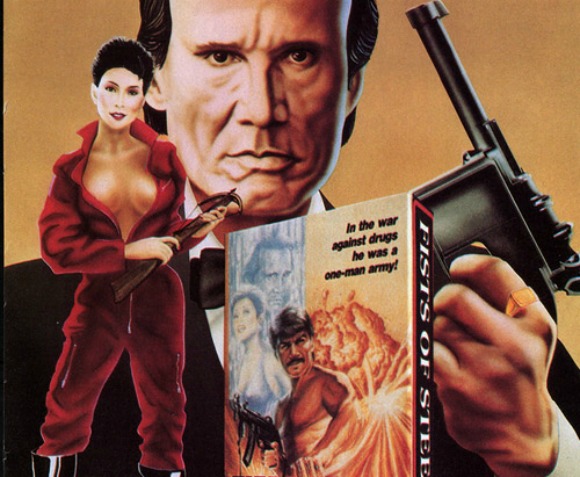 In Hawaii Carlos tells the bad guys that people call him Conquistador. This is demonstrably false, because there was a long scene with like 5 or 6 of his friends saying his name over and over again, they didn’t call him a conquistador one time. The only one who did was his little daughter, saying “There’s my daddy, the boxing champ. My conquistador.” I don’t consider that to count as a nickname.

When it turns into more of a standard undercover investigation story there’s the scene where he’s at an outdoor restaurant, some big-haired diva is (lip synching) on stage, he makes eyes at her and when the song ends she walks right over to him, as happens in these movies. But the thing that’s different is as soon as she steps off the stage and comes closer to the camera it becomes blinding obvious that she’s a man. So then there’s this suspense about what’s going on here. Is Carlos not reacting because he needs to be cool with it to get in with the organization, because he’s cool with it anyway, or because he doesn’t notice? The only hint is the scene where the singer (referred to as Mrs. Darcel, Julie Darcel, the girl or just “Girl” in the credits) puts her hand on Carlos’s knee three times and he moves it away every time. But if this is some kind of homophobia it was out of character, because (SPOILER) the man is surprised when Girl (Kenny Kerr) takes off his wig and shirt, talks in a deep voice and starts doing karate. This was a year before THE CRYING GAME, by the way.

Drag comes up in another scene where his CIA buddy suddenly appears to him in brownface disguised as a hotel maid. No shit.

But the gender switch is not the craziest twist at all. That would be at the end when Carlos puts a gun in Shogi’s mouth and fires, blowing apart his face and revealing a Terminator-like robot skeleton beneath. If this was set up in any way I sure missed it. It’s not a movie that takes place in the future, or mentions robots or futuristic technology at any point.

This scene is also great because the real Shogi has gone through the trouble of replacing himself with a robot duplicate to get shot, but then he immediately goes over to the robot laughing, so that he actually does get shot. (And what was he gonna do with that toolbox, anyway? I don’t think tightening bolts is gonna do much.)

Silva is a great bad guy. I always remember him from ABOVE THE LAW of course, you may also recognize him as Prune Face from DICK TRACY. He wore makeup for that but he kinda looks like a DICK TRACY villain even without it. Here he’s especially evil because he likes dressing up in costumes to torture people. But that’s also a symptom of him just wanting to have a good time. He has women playing volleyball and croquet in his yard, and an assistant who brings him wine at 78 degrees. He’s like Jackie Treehorn meets Freddy Krueger.

Shogi’s girl Katrina is pretty interesting too, she shoots people with a crossbow and I think she’s supposed to be playing Russian but she looks and sounds Latin.

IMDb lists the year of release as 1991, so that must be when the tape came out. But here http://sportsillustrated.cnn.com/vault/article/magazine/MAG1067946/index.htm is a Sports Illustrated article from 1988 talking about its impending release. They seem under the impression that it’s a real movie and not a crazy affair with John Holmes level dialogue and acting.

There are plenty of other funny lines and moments I could describe, but I really think you should track this one down, or somebody should release it on the blu-ray. Maybe it could include that elusive Apollo Cook movie as a bonus feature.