Home  ⁄  The Wire  ⁄  THE PERFECTION Orchestrates An Aria Of Twisted, Perverse Surprises

There’s no way to coherently to review a film like THE PERFECTION without giving what makes it tick away. It’s that kind of movie, the kind of film where the twists and turns come so unexpectedly, with such hair-trigger precision, and go to places that one would never even expect to think of, at any sort of plot synopsis or critical evaluation risks ruining the film’s cathartically perverse spell.

THE PERFECTION is the latest from Richard Shephard, who is probably best known for the 2005 cult item THE MATADOR. That film was a shaggy crime comedy about the friendship that buds between a louche assassin, played as a sozzled wink to his Bond past by Pierce Brosnan, and a hangdog milquetoast played the patron saint of hangdog milquetoasts, Greg Kinnear. That film was all about the relationship between these yin yang souls, and there is a similar focus on the shifting relationships between the characters in THE PERFECTION, only, this time, Shephard is working in a different register. Here he’s moved away from the criminal-centric underworlds of both that film, and his last, the Jude Law-starrer DOM HEMINGWAY to make the kind of bloody pulp puzzle that can be best described as the bastard child of Brian DePalma, David Cronenberg, Park Chan-Wook and schlock gore-slinger Eli Roth.

THE PERFECTION takes place in the hoity-toity world of classic music repertory schools, where young woman are trussed up like porcelain dolls while sawing away cello concertos for an audience of formally attired stuffed shirts. This is the world where Charlotte (Allison Williams) comes from. A former child cello prodigy, she had to leave this rarefied land, where she was an exalted chosen one since a young age, to take care of her mother when the older woman got sick. Now that she is dead, Charlotte decides to make a surprise return appearance, phoning her former mentor, Anton (Steven Weber), to see if she can visit him on a scouting mission to Shanghai.

It’s there that she meets Anton’s newest prized pupil, Lizzie (Logan Browning) a bright-eyed younger woman who took Charlotte’s place as the center of the academy. She’s since grown into the kind of star that Charlotte could have been, and when they are both asked to judge a talent contest between three Chinese pre-teens — the winner of which will be given a free ride to Anton’s school — we suspect that a certain ALL ABOUT EVE tension is about the erupt between the veteran who lost her shot to tragedy, and the upstart who subsumed her place in things. 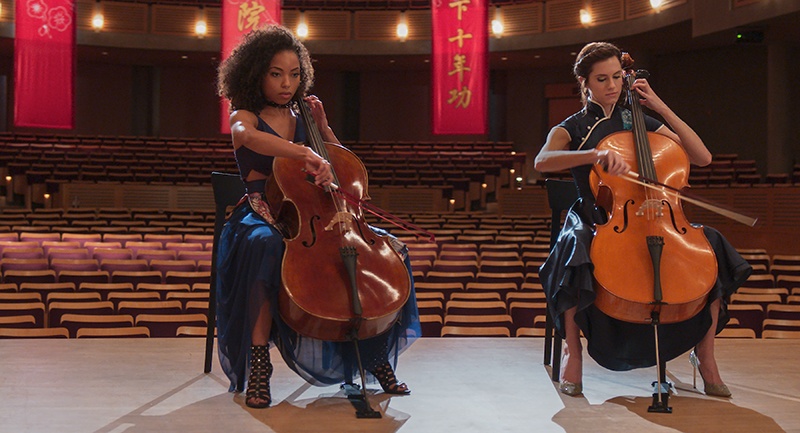 Except, that doesn’t happen. Charlotte and Lizzie develop an emphatic respect for each other, both woman looking in awe at the other’s talents, and the quickly edges into friendship and maybe something more. But then the two woman take a day trip to the Chinese countryside and there, in the middle of nowhere, something unspeakable happens.

Let’s just leave it there.  The purest pleasure of THE PERFECTION is the way it keeps us on our toes. The movie starts to head into one direction, but then, as it goes on, it begins to shift into something else– something gnarlier, something more outre. And it’s still not done. As it goes on, it reverses, and shifts, and mutates from there, and you never quite know what to expect next. It’s a three card monte film, only it’s impossible to keep your eyes on the card.

One thing that can be said about the film, however, is that it delivers a blast of nutty grindhouse thrills. Even though it’s set in the sniffly austere world of uppercrust art snobs, the movie has no problem banging around in 42nd street gutters. There’s an utterly gratuitous sex scene, gratuitous fogged-out full frontal nudity, and even more gratuitous splashes of gore. Everything looks chic and refined, yet there’s a nasty current of cartoon viciousness coursing through its veins.

That bugged out drive-in spirit acidity isn’t just there to get the crowd to revel in its midnight movie authenticity, however. There’s a molten core of righteous anger, too. THE PERFECTION is, shall we say, a movie of the moment, a very topical act of chaotic savagery. It would be remiss of me to say just how it fits into our modern landscape of one-thing-after-another clickbait hellishness, but in its own sleazy kitsch way, it offers a moment of catharsis. And that’s what makes it such a supreme example of modern exploitation. Because under all the scuzz, under all that cheerfully pandering sexed-up violent grime, the best films of the grindhouse market didn’t just give us those giddy cheap thrills, they did so with an eye for shocks and release, as well.