Joseph Campbell’s hero’s journey sure did do a number on us the last thirty years didn’t it? I mean, has anything been more prevalent in our species subconscious as the fantasy of being thrust into a larger than life adventure and finding out that you—yes you—are the only hope for the world? It gives you goosebumps just thinking about it doesn’t it? But if you take a step back and you consider that if you, in the Cheetos covered sweats and the Phish t-shirt—two credits short of an associates degree—were actually thrust into a situation where you were the only hope for the world that’s not so much exhilarating as it is straight up terrifying. I mean, and here’s a jalapeno for the soul for you, imagine if Luke Skywalker has watched the amount of porn you have? Yeah, we’re all doomed.

Of course if Luke Skywalker had to deal with half the shit that occurs in JOHN DIES AT THE END the Force would come leaking out his ears.

That’s exactly what director Don Coscarelli is playing at. His PHANTASM films have routinely been touted as horror’s answer to STAR WARS, and as surreal as those films are, they operate on a very clear lines when it comes to good/evil. JOHN DIES AT THE END operates in a kind of morality that uses the line between good and evil, as a jump rope that routinely goes from mind bending terror to madcap farce. Adapting the cult novel of the same name by David Wong aka Cracked Editor in Chief Jason Pargin, Coscarelli crafts a narrative that’s structured like a shaggy dog story with no less than three beginnings and a plot that involves sentient drugs, genital obsessed demons, soul devouring fruit flies, car driving dogs, and more than a little death by mutated spider. All of lands at the feet of two guys who would have a hard time coordinating a trip to IHOP let alone peeling back the veil of reality and deal with all the squishy weirdness that entails.

For me that makes it the most relatable movie in the world.

At this point I should probably clarify that while I have a lot of affection for PHANTASM. I’m definitely not as ride or die for it as a lot of fellow DG writers are. It took me awhile to come to appreciate PHANTASM, but even now my relationship to it is the same as a hundred other cool movies. However, with JOHN DIES AT THE END something just snapped into focus for me. Part of it was my familiarity with the source material (a rambling novel that’s one part HP Lovecraft & one part Judd Apatow) but it was that wonderful amalgamation of word and vision that only film can achieve. Seeing it as someone roughly the same age as the protagonists one it first came out, there was an instant kindred recognition on my part that has only grown over the years from me. After all, weird recognizes weird. 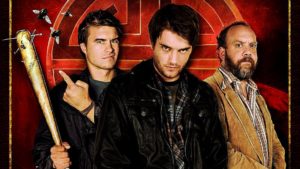 A lot of it comes down to a personal belief that I’ve been forming since I was eighteen in that I’ve become more and more convinced that I was born to a generation that seems destined to constantly witness some pretty weird shit. Not to get too into it—and lord knows these experiences are not universal—I’ve had to deal with tatted up giants tripping on psychotropics, walked through woods where I know something would’ve tried to kill me if I didn’t quicken my step, and walked down neon lit alleys hoping something wouldn’t grab me from long dark shadows. When I’ve actually sat down to think about this stuff I think why people wonder why so many people my age have diagnosed mental disorders and regularly self medicate. Chances are we’re all seeing the same monsters in the dark and instead of talking about it we just try and cope.

And despite the interview that frames the film you get the feeling that nobody wants to talk about this stuff less than David Wong, played with astonishing confidence in its craft by relative newcomer Chase Williamson. Introduced chopping a mans head off with an object that might hold the secrets to the universe, we’re given a character where numbness seems to be his default setting which is only offset by Rob Mayes titular John’s gregarious off the wall energy. Given the films unique structure we see them operate near the end of the story before anything else where they’re in full-on paranormal investigator mode albeit in their distinctive style (as in incredibly reluctantly and at least partially in the pursuit of getting laid). Pretty sure the SUPERNATURAL guys never had to deal with a girl whose face exploded into snakes and a giant monster made of meat which is taken out with a phone call from someone way better at their jobs than they are. But hey what else are you gonna do in Undisclosed on a Saturday night.

It always comes down to finding something to do on a Saturday night, and everything really kicks off with the worst last party for all of those about to die. Starting your journey via a fake Jamaican slinging malevolent narcotics isn’t the most auspicious of beginning’s the bit where Dave’s only response to a girl freaking out about said fake Jamaican levitating off the ground is to deadpan ask “How high?” you cant help but find the whole scene charming. And then people start exploding.

Of all the weirdness within JOHN DIES AT THE END the drug known only as “Soy Sauce” is the bit that will always stick in your mind. A dues ex machina with the personality of a pissed off Machiavellian pit-bull, the sauce is a drug that you don’t so much use to get high so much as it uses you to further its own gains. As John says later in the film “If the sauce can’t use you it kills you!” which is about as succinct a metaphor for heavy drug use as I’ve ever heard. Couple with the fact that it bends reality and does everything from raise the dead, turn back time the ramifications of its use are far reaching and mind boggling.

This doesn’t matter a damn bit to Dave. All he knows is that the sauce kicks off a series of events that kill his best friend (he gets better), kidnaps his crush, frames him for mass murder, and puts him into the crosshairs of a interdimensional intelligence that would use all of that damage to cause more. Like I said before, Dave seems to exist in a state of perpetual numbness that I appreciate. Eventually a ferociousness (who among us hasn’t wanted to kill someone so bad our dick gets hard) comes through that further focuses in on the films particular take of youthful heroism of necessity. The adults are either woefully inept, corrupted, or coldly aloof so if he’s the best chance the worlds got than whatever. Just another Saturday night right? 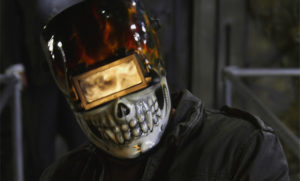 Something like this is absolutely vital especially as new generations pop up they need stories that represent the best of themselves. Certain things haven’t aged well in the last few years in some regards (the film is super white and super male for todays standards) but Coscarelli crafted something that’s just as distinctive to PHANTASM nearly three decades after the fact. It’s a movie where evil isn’t met with a steely eye and a battle cry, but with a pissed off expression and a sigh of exasperation because you gotta deal with this weird shit now. Coscarelli is a master of horror, of that there is no doubt, but he’s also a cinematic myth maker. With JOHN DIES AT THE END, Coscarelli created a movie for millennials what PHANTASM did for Generation X. As someone who has managed to convince myself we’re all just sprinting towards the apocalypse in my more contemplative (and sober) moments the idea that even the most damaged of us can do some good at “put up or shut up” time is consistently inspiring and would probably be felt by a lot more if they got their eyeballs on this film.

At the very least it would make people realize that when I say we’re going to kill the president I’m really just asking for beer.