Home  ⁄  The Wire  ⁄  [PHANTASM WEEK] The Ball Is Back! The Marketing Of PHANTASM II

The 1988 summer movie season was one of huge hits: COMING TO AMERICA, WHO FRAMED ROGER RABBIT, BIG, BULL DURHAM. Those movies, and others, lit up the box office. Into that mix came a low-budget horror sequel, Don Coscarelli’s PHANTASM II. It opened on July 8 in 1,227 theaters and earned just $3 million in its debut weekend. (Even the much-maligned CADDYSHACK II had a better opening that summer.) The results were so poor that the film was gone by August. Despite its undeniable commercial failure, PHANTASM II was an obsession for a young college student from Pennsylvania (i.e. me), thanks to its unusual marketing campaign, particularly the theatrical trailer.

Before reading any further, give it a look:

There are many things that stand out in that trailer, but the one that stands out the most is the tagline: This summer…the ball is back! Universal Pictures based all their marketing around that slogan. It was in the trailer, in the TV spots, on the poster, on billboards, and in the print ads. It was an odd choice, yet also one that lingered in the mind. To this day, you can say those words to horror fans and they know exactly what film you’re talking about.

The reason that tagline was unusual was because — along with the II in the title — it marked PHANTASM II as a sequel, which may not have been the greatest idea from a business standpoint. The original PHANTASM had been a modest hit, earning just under $12 million. But that was was in 1979, nine years prior. Many of the teens at whom the sequel was aimed were too young to have seen it, and therefore they had no connection to the concept of the ball. 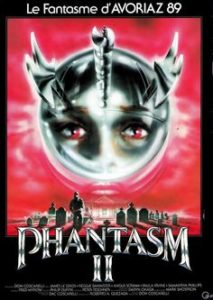 PHANTASM was not a mainstream horror picture, anyway. Distributor AVCO Embassy released a wide swath of cinematic fare, but specialized in distributing low-budget exploitation, the likes of which didn’t always play in mainstream theaters next to THE MUPPET MOVIE. Like a lot of indie horror flicks of the day, it hung around thanks to good word-of-mouth, as opposed to taking America by storm, the way Ridley Scott’s ALIEN, which opened six weeks before, did. If, like me, you lived in a small town, a picture like that wasn’t even on your radar, unless you happened to stumble across a VHS copy at your local video store. For a major studio like Universal to give wide release to the sequel of what was essentially a cult success was surprising. 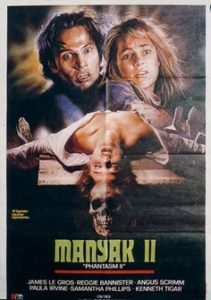 That notion aside, the tagline is part of what made the trailer so hypnotic. For those of us who had minimal or no awareness of PHANTASM, the idea of the ball returning was intriguing. Many questions were brought to mind: What is the ball? What does it do? Where is it coming back from? Right as the words are spoken in the trailer, we see a silver orb with protruding spikes fly through a mausoleum and embed itself in the head of a priest, which added exponentially to the mystery. It was clear that the ball’s return would not necessarily be a good thing for the movie’s characters. In that sense, the marketing campaign was hugely successful. It created an allure around the story’s central object, which, like the slogan, was heavily emphasized in advertising the film. I, for one, really wanted to understand the ball and its lethal abilities.

Just as impactful was the voiceover work from Percy Rodriguez. Along with the more well-known Don “In a world…” LaFontaine, he was a trailer fixture during the 1970s and 1980s. His deep, booming voice was often utilized to sell horror movies or thrillers. (JAWS, VIDEODROME, and CHILDREN OF THE CORN were among his other trailers.) Rodriguez’s sonorous tones made the words This summer…the ball is back! sound like a direct threat against the audience. There was genuine menace in his reading of that phrase. I won’t lie; it unnerved me, but in a good kind of way. Every time one of the TV ads came on, I paid rapt attention, waiting for him to drop that ominous bombshell. It was creepy, offering the promise that the movie itself would also be creepy.

If Rodriguez was part of the fascination, so was the presence of actor Angus Scrimm, who portrayed “The Tall Man” in the PHANTASM series. Scrimm, an older gentleman, was a very atypical villain at the time. The ’80s was the era of Freddy Kruger and Jason Voorhees. Cinematic psychos were often masked or disfigured in some way. They wielded machetes and gloves with razor fingers. The Tall Man, in contrast, was an old mortician who liked to whip out his balls. (Okay, that sounds really dirty, but you know what I mean.) Scrimm was physically imposing, with a scowl to rival any of the great screen baddies. Even the way he held the orbs was intimidating. Horror, by nature, depends on freshness. Things audiences have been exposed to repeatedly tend to lose their sting. Scrimm as the Tall Man was not only far more realistic than Freddy or Jason, he also was radically out of the norm at that time.

All of these elements swirled together to make PHANTASM II seem like something really special. Nothing about it appeared conventional. For a young man in the early stages of appreciating horror cinema as a legitimate art form, seeing such creative advertising served as proof that the genre had more to offer than it was frequently given credit for. 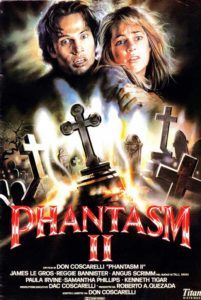 Regrettably, I ended up being massively disappointed in the flick when I saw it. In large part, that disappointment stemmed from the fact that I expected ninety straight minutes of hardcore silver ball action. I wanted nonstop gizmos emerging from the orb and ripping into flesh. PHANTASM II largely withholds that sort of thing until the end. I’ve since seen the movie a couple more times, and my appreciation for it has grown. This is not a perfect film by any stretch of the imagination, but it’s a pretty solid execution of an outside-the-box premise.

With the release of PHANTASM: RAVAGER, the ball is back once again. It marks the final screen appearance of Angus Scrimm, who passed away in January of this year. Percy Rodriguez is no longer with us either; he died in 2007. (Ironically, both were 89 when they left this earth.) The impact RAVAGER will have remains to be seen. One hopes, though, that this new sequel will embrace PHANTASM II‘s marking creativity. Other horror pictures would be smart to do likewise. So many genre films are sold to the public in generic, familiar ways. It would be great to see more of them have their uniqueness emphasized to entice fans into buying a ticket.