To understand the brilliant way that Don Coscarelli returned to and expanded upon his PHANTASM universe, it’s important to start with the epic vampire tale, SALEM’S LOT.

Think about this for a moment and really dig into the gray matter. PHANTASM, the film of literal nightmares, is about a small town filled with real people, just like the Lot. They get together and have jam sessions. They haunt the same bars and somehow sleep with the same lavender clad women. One of them is a blue collar ice cream worker, the other’s just a precocious kid well beyond his years, who cares deeply about his brother. Then, it’s all torn to hell. Our ice cream vendor finds himself without a friend and our young hero sans a brother. Their town torn asunder by a man, or something less than a man. Something worse. Something with apocalyptic intentions. 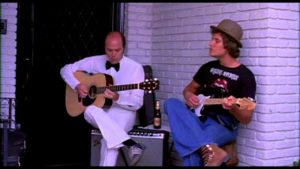 Sound familiar? Over the course of Stephen King’s SALEM’S LOT, the overall story was about the town and the minute details of all of its citizens. But then, hell breaks loose and an evil force takes over, effectively destroying the town forever. Sure, Kurt Barlow looks like a man, speaks as one and even owns his own business. But beneath that apple’s core, it’s all rot to the root. In the book’s final act, it switches gears. It becomes the story of Ben Mears and Mark Petrie at this point, an unlikely pairing and an even more unlikely duo of vampire killers. 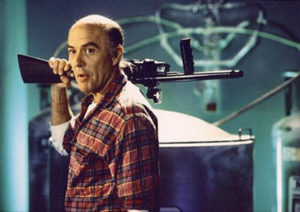 And isn’t that what PHANTASM II does? Reggie’s our intrepid regular guy hero who exudes swagger while he’s whipping out his badass four barreled shotgun (which as a young viewer was about the coolest damned thing I could think of), and Mike, the psychically troubled youth who will find himself menaced by the dark terror that is ‘The Tall Man.’ It takes the blue collar aspects of the original and magnifies them to a scenario where you can believe our heroes could manufacture the tools to take on the dark forces. The way Reggie makes his aforementioned four-barreled shotgun, or how Mike forges a nifty looking blowtorch. It hammers home that they’re not soldiers. They’re us. They drink Budweiser. They drive the same roads we do. It’s the same theme King adopts and Coscarelli wisely adapts.

It’s with this, that PHANTASM II becomes its own movie. It takes the claustrophobic suburbia of the first film, the small town surrounding Morningside Cemetery, and opens itself onto the sun-bleached blacktop highways and right into the towns that’ve been exhumed and excavated by The Tall Man and his minions of Hell. The scene where Reggie and Mike traverse the empty graveyard is epic in scope, (there’s even a crane shot). Perigord feels like a real dead town, and man, it looks amazing given the $3 million budget that Coscarelli was given. The way the interiors of churches are shot, all murk and darkness, you can practically smell the places. It gives us more iconic scenes with the Sentinels, the brain sucking spheres employed by The Tall Man. We see the spooky Gravers, the gas mask clad diggers who exhume the corpses for nefarious purposes. 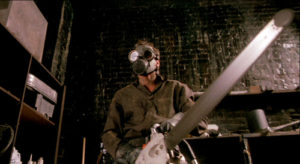 The world that opens up in the sequel is amazing. It shows us that The Tall Man’s been busy all these years that Mike’s been locked away. He’s scrapping towns for all their parts and leaving empty husks in his wake. But it’s cool how haunted Coscarelli makes the desolate places seem, kind of like we’re watching a Western where the bad guys came in, and the heroes didn’t save the day. It’s the anti-western in that regard. It’s less about saving the world right now, and hoping to God we can save what’s left. And if dying’s the option they’ve got, then they’re doomed.

The fact that PHANTASM II got green-lit is a miracle in its own right. It was a decade after the original stunned audiences and here it was, getting a bigger budget and a mainstream release from Universal Pictures. The biggest case of director compromise was that Coscarelli had to tone down the more surrealistic aspects of the first one. I don’t frankly see that. PHANTASM II is still a waking nightmare, but in a different, more realized sense: corpses showing up in the dead of night on the doorstep of the manic, alcoholic priest or the creepy images of The Tall Man’s Jawa-esque cloaked creatures chasing Reggie around his house in the film’s opening minutes. Some people would call these things parameters, but in the hands of an ace like Coscarelli, he makes magic happen. 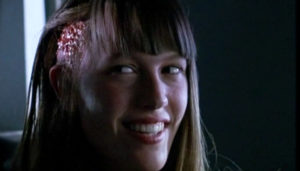 He also works wonders with flashbacks and dream logic, making the audience question reality in different ways, like Reggie’s strange and hilarious relationship with the hitchhiker/minion of The Tall Man, Alchemy. First she’s glimpsed as a nude corpse on an autopsy table. Then, she’s living and breathing guiding the boys down to their final destination. Her character is played ambiguously in the end. We’re either made to believe that A) she was dead all along, or b) she was nabbed by The Tall Man as another pawn in the cosmic chess game he’s playing. This is great work on the director’s part keeping the audience guessing all these years later as to what he’s really playing at.

The other big mandate was that he needed a name actor in the role, as A. Michael Baldwin, the lead from the first, had been out of the acting game for a little while, and Universal wanted an actor with a little more acting credits to his work. Enter James LeGros, who had just previously appeared in the brilliant vampire western NEAR DARK. James LeGros does a fine job fitting into the pre-existing universe, with his mannerisms and the way he uses the language Coscarelli writes, he feels fine in the part, not like a shoehorned addition forced upon someone by the powers that be.

And while the boys try to save the day, we learn that there’s someone out there, another innocent victim of The Tall Man who shares a bond with our young hero, Liz, a girl whose entire family has been torn about by the madman from another universe. This was another studio mandate but again feels real, as it gives our heroes purpose in driving down the long and lonesome road to hell. You feel for Liz’s character and her family. The struggle in the film is shared between her and Mike. It’s becomes their battle and she proves herself quite the adversary against the enemy. 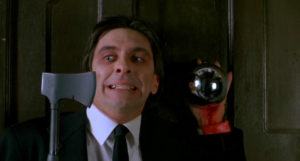 The film shows off Don Coscarelli’s growing strengths as a filmmaker. We get the POV shots of the Sentinels as they swoop in and out of the mortuary halls. The camera tracks and prowls around the victims and villains forcing us to see the things we fear the most. The special effects are top notch, too. The scene where the so-called “Rambo Sphere” rips up and into the mortuary worker is a gross highlight of KNB Effects at the highest of their prime. And Fred Myrow’s score is made even more iconic for this entry. Whereas in the first film, it was mood music, in the sequel it drives the piece. It becomes more rollicking and exciting. It’s rightfully a classic horror score.

The ending is much darker than the original, and a little abrupt, but fits in with the themes resonate to the piece. It’s not nihilism for the sake of nihilism. It works and is a damn fine conclusion. And thankfully, was not the end.

Phantasm II opened in theatres on July 8th, 1988 at ninth place with an opening weekend gross of $3,012,285 over 1,227 theatres. It was rightfully a success, totaling over $7 million domestic. Reviews were mixed, and in the case of the brilliant Roger Ebert, negative. But in his review, in which he confesses to not understand its appeal, he hits the nail on the head:

“PHANTASM II is like an extended dream in which characters appear and disappear according to no logical timetable and a wide-angle lens makes everything look distended and nightmarish.

The images are of corpses and graveyards, spurting blood and severed skulls, rotting flesh and faces filled with terror. Sitting through a film like this, which contains so little of genuine interest, I found myself meditating on such images, wondering who they would appeal to, and why.

The target audience for PHANTASM II obviously is teenagers, especially those with abbreviated attention spans, who require a thrill a minute. No character development, logic or subtlety is necessary, just a sensation every now and again to provide the impression that something is happening on the screen.

But why would images of death and decay seem entertaining to them? For the same reason, I imagine, that the horror genre has always been attractive to adolescents. They feel immortal, immune to the processes of aging and death, and so to them these scenes of coffins and corpses represent a psychological weapon against adults. Kids will never die.”

Even when Ebert hated a movie, he gave a smart and damn good reason why. And this which he outlined above, is the appeal of PHANTASM II But I’d argue that the reason the PHANTASM series appeals to adults and kids alike is that horror is the universal fear of death, paramount among us all as the biggest horror. So, wouldn’t we want to watch a story where two men, people who are us in every sense of the word, fight the literal grim specter of death? That’s as American as apple pie and coffee.

Thankfully, PHANTASM II wasn’t left to flounder on home video forever. For most kids like me, we were stuck with the MCA Home Video release until the geniuses at Scream Factory released a packed to the gills special edition a few years back. It cleaned the hell out of an already gorgeous looking film, stuffed it with essential commentaries and a must-watch documentary that highlights the real appeal of this loved sequel. For “phans,” it was an immediate buy. 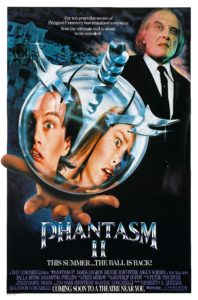 By opening the world up, our brilliant writer and director simultaneously tightened the noose around everyone’s neck. And we had three more sequels that built and built upon the universe. There was more asphalt to pound, more creatures to fight, more spheres to destroy and more mausoleums to burn to the ground. The nightmares didn’t end here.

They still haven’t ended. And I’m still figuring the movie out.