Can we eat first?

There’s a center of loneliness that runs through Pesce’s movies. People in his films are driven to depths of psychosis searching for someone, anyone, to latch on to, to fill that aching maw in their soul. His first feature, THE EYES OF MY MOTHER, focuses on a young woman who keeps a man chained in her barn and kidnaps a child and his mother when her beloved father dies. Bereaved and lost, she raises the child as her own, keeping the mother as a chained pet, desperate to assuage the malignant void eating her alive.

PIERCING couldn’t be any more opposite in tone from that film, but there’s a lingering similarity in its portrait of souls adrift in the sea of desolation. MOTHER is stately and austere, shot in rich, velvety tones of chiaroscuro black and white, its protagonist a spectral figure haunting this empty farm steeped in blood. PIERCING, however, is a comic book, a stylized pop of bright colors, split screens and intentionally phony exterior model work. Yet both tell tales of lost souls grasping toward something bigger.

Reed (Christopher Abbott) is a big city family man who struggles with one big problem. He wants to kill. While his baby girl bawls in her crib — and he hovers above her with a poised ice pick in hand — and his wife slumbers in their bed, he struggles to repress his urge to murder a human being. Voices whisper in his ear, he hallucinates commands to kill and it becomes a percolating desire deep in his soul, eating its way through his psyche. In order to tamp down the urge, to not take it out on his family, he decides the best course of action is to give in, to carefully plan a murder to satiate this enveloping hunger.

Reed’s plan is to check into an out of town hotel and hire an escort to be his victim. He rehearses everything, planning everything down to the last detail, even chloroforming himself to test lengths of time on is knocked out. But we all know the thing about best laid plans, and Reed’s meticulousness is thrown asunder when his preferred escort is unavailable, leaving him with only the next possible woman available: Jackie (Mia Wasikowska), a wide-eyed young woman who somehow proves even more troubled than Reed.

PIERCING is a colorful black comic two hander that begins with Reed’s twisted rehearsals before turning into a perverse tete-a-tete between these two psychotically unhinged individuals. Based on a novel by Ryu Murakami — who also wrote the source material for AUDITION — this plays the flippant, vibrant B side to that Takashi Miike masterpiece. This is similarly about how a man with ill intent gets his comeuppance at the hands of a woman he underestimates, but where that film is vicious in its shocking descent into darkness, PIERCING is playful, laced with with surprising spikes of humor — dark as pitch humor, but humor nonetheless. Pesce pulls from influences like David Cronenberg and Brian DePalma, and everything is designed in chic ‘60s decor, with flesh being beat and torn against beige shag carpeting.

Yet the film isn’t just a colorful redux of that Miike film, as it begins to go down twisted avenues of its own.  Abbott and Wasikowska are both terrific in a duelling pair of tricky roles, and their seesawing relationship has a more complex pathology than the spider and fly dynamic of that earlier film. PIERCING may be on the slighter side, coming off like some sort of visualized stage play than a full movie, but in its own tawdry sick joke way it captures the absurd desperation that longing and loneliness feed on. But, can we eat first? 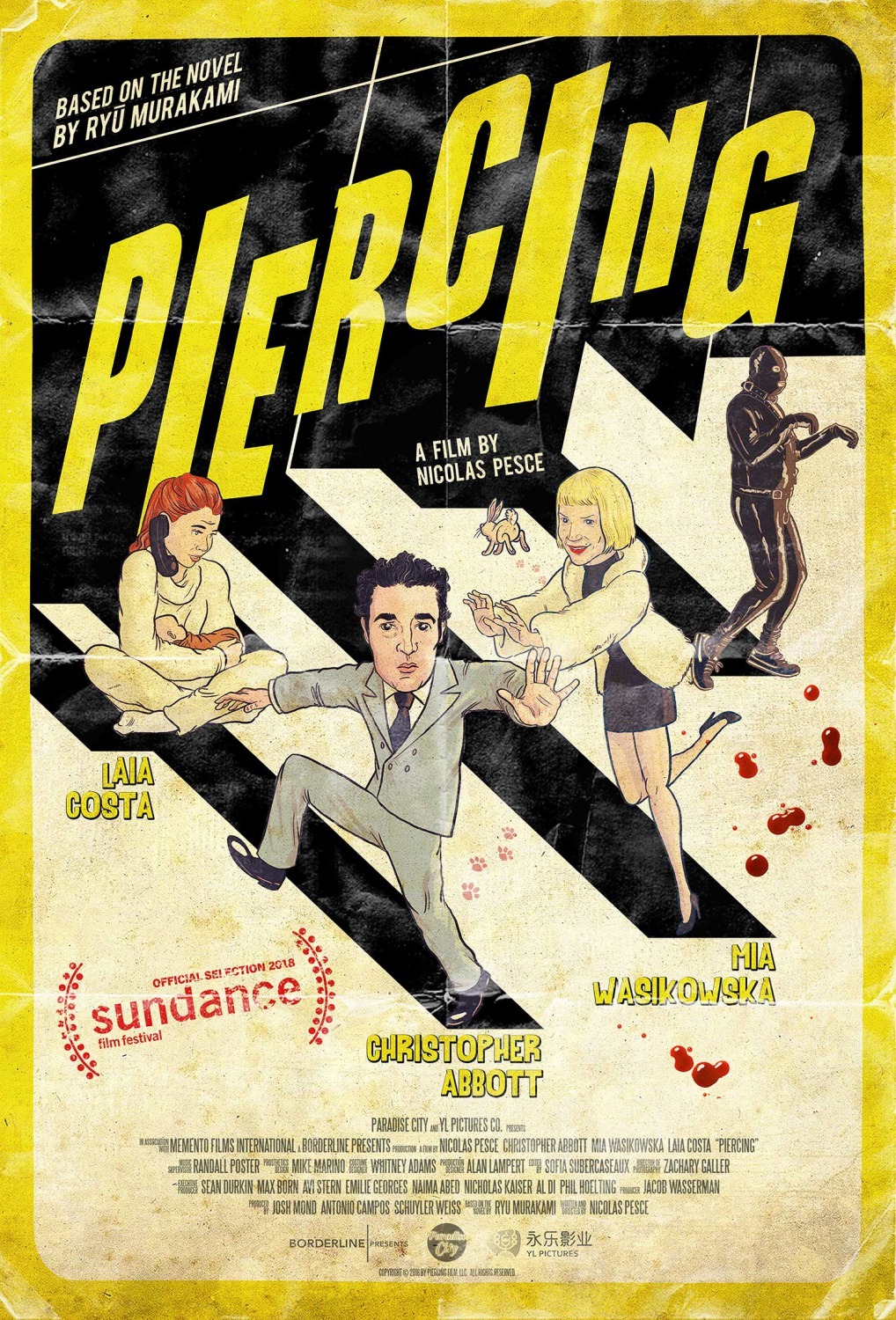