On the surface DEVIL IN THE DARK seems like it is going to be a fairly typical story. Estranged brothers go on a weekend camping and hunting excursion only to find themselves stalked by an unseen force that appears to be hostile in nature. Yet, as the story unfolds you find that this is not a typical “monster in the woods” kind of story, instead it’s an emotional and tense family drama that happens to feature an underlying sense of dread brought about by the stalking terror that is carried exceedingly well by the brothers whose dialogue and interactions make up a majority of the film’s run time.

First off it’s really important to stress how well Dan Payne and Robin Dunne perform their roles as the brothers Clint and Adam. They are two very different people, while Clint is the outdoorsy type who seems to follow in the footsteps of their father, Adam left home to travel to the city and live his life there. With that said one of the most impressive things here is that both brothers come off as likable but also human. It would have been easy to have Adam be a stereotypical hipster and for Clint to be essential a redneck but neither come off as broad generalizations. They simply come off as two different people with quirks and habits which helps make that underlying sense of dread more palpable, you really don’t want to see anything terrible happen to the two of them. Besides these two you do have other characters such as Clint’s wife Sophie and their kids along with some local’s who make enjoyable turns to help flesh out the history of the two leads and while a majority of the film is the brother’s story you have some solid flashback sequences to their youth where can see the struggle beginning of how different the two of them really are. 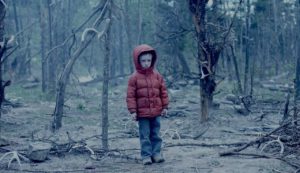 DEVIL IN THE DARK runs at a lean 82 minutes and keeps a great pace throughout, it takes just enough time to establish the characters without becoming overwrought and uses sparing musical cues to keep the tension high even during seemingly calm moments. You also get some nice camerawork that makes use of overhead shots of the forest and excellent lighting to keep the nighttime segments rife with unease, overall it’s a well shot and well made movie that is enjoyable enough to take in to where even those walking in wanting a straight forward movie along the lines of say 2006’s ABOMINABLE or any number of other horror films set in a forest. It’s a taut story that manages to be relate-able and honestly quite emotional depending on one’s own family history. In closing DEVIL IN THE DARK is a pleasant surprise, a film that manages to use tension and good acting to propel the story forward and doesn’t rely on jump scares or shocking scenes of gore and violence to keep the viewer engaged. Definitely check this one out.

DEVIL IN THE DARK hits VOD on March 7th from Momentum Pictures.