Since we feel it is important here at DAILY GRINDHOUSE to remember the “Grindhouse” part of our name, we are always on the lookout for projects that honor the sleazy aesthetic associated with the legendary New York grindhouses of the past. OUR LADY OF THE INFERNO, a new novel by Preston Fassel seems to be right up that gratuitous sex-and-violence filled alley. 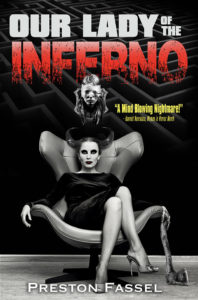 The description of the novel on Amazon makes me wish Cannon Films was still around to adapt it:

Spring, 1983. Sally Ride is about to go into space. Flashdance is a cultural phenomenon. And in Times Square, two very deadly women are on a collision course with destiny– and each other. At twenty-one, Ginny Kurva is already legendary on 42nd Street. To the pimp for whom she works, she’s the perfect weapon– a martial artist capable of taking down men twice her size. To the girls she works with, she’s mother, teacher, and protector. To the little sister she cares for, she’s a hero. Yet Ginny’s bravado and icy confidence hides a mind at the breaking point, her sanity slowly slipping away as both her addictions and the sins of her past catch up with her… At thirty-seven, Nicolette Aster is the most respected woman at the landfill where she works. Quiet and competent, she’s admired by the secretaries and trusted by her supervisors. Yet those around her have no idea how Nicolette spends her nights– when the hateful madness she keeps repressed by day finally emerges, and she turns the dump into her own personal hunting ground to engage in a nightmarish bloodsport… In the Spring of 1983, neither Ginny nor Nicolette knows the other exists. By the time Summer rolls around, one of them will be dead. Written in homage to the grindhouse films of the 1970s and the pop culture of the 1980s, Our Lady of the Inferno is a blood-soaked exploration of women’s struggles in an indifferent world– a funny, brutal, trip straight into the heart of a man-made Hell.

Fassel is a longtime writer for RUE MORGUE MAGAZINE where he has focused on covering women horror filmmakers and writers. If his genre knowledge and influences have come together to craft the kind of grindhouse homage the description promises, this could be a fun novel worth reading.

OUR LADY OF THE INFERNO is now available on Amazon from FEAR FRONT PUBLISHING.

Tags: Our Lady Of The Inferno, Presten Fassel, Rue Morgue