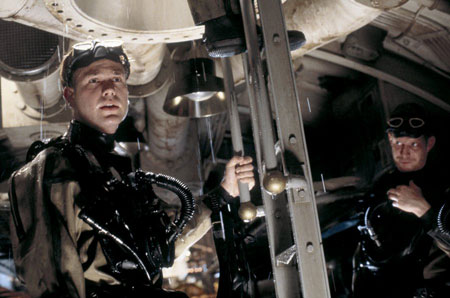 It’s summertime!  And it’s shark week!  So let’s celebrate by getting you out on the water by reeling you in with ten flicks that’ll let you sink deep… into your couch.  As usual, the poster art links to the Netflix page, so take the bait and dive in!

Mr. B.I.G. himself, Bert I. Gordon, directed this tale of a lad in 1960 who meets a genie (played by THE SHINING‘s Lloyd the Bartended, Joe Turkel) that brings him back in time to a real-life pirate ship!  Blackbeardedness ensures.

It wasn’t very well-received upon its original release, but I happen to think Disney’s non-musical undersea adventure flick is a lot of clever fun, featuring the vocal talents of Michael J. Fox, James Garner, Cree Summer, Don Novello, Phil Morris, Claudia Christian, Jim Varney, Leonard Nimoy and David Ogden Stiers.  Heck, Joss Whedon was even involved with it at some point, isn’t that enough for you?

What would a list like this be without a killer shark film with Lou Diamond Phillips, Kristy Swanson and Coolio?  Not this one, certainly, and while it’s no great shakes, it’s mildly better than most Syfy Channel flicks.

Michael Anderson’s notable JAWS wannabe produced by Dino DeLaurentiis features Richard Harris and Charlotte Rampling on the hunt for the whale that’s pissed off about the death of his family, while Bo Derek tries on different drenched T-shirts. With Will Sampson, Keenan Wynn and Robert Carradine.

In Andrew Traucki’s better-than-average shark pic, a group of chums become chum on a capsized ship fend off a great white. Relying on suspense over crummy CGI sharks, this Australian flick is certainly more notable than its basic cover art suggests.

Sure, Scorpion Releasing is issuing Lamberto Bava’s 1984 sea monster pic on Blu-ray soon, but the occasional wisecrack will certainly help you get through it at least as well as a crystal-clear image would.  (Maybe.)

Co-written by Darren Aronofsky and director David Twohy, this tale of a potentially haunted submarine during WWII was barely released to theaters, and it’s a shame, as it’s a damn solid thriller that makes great use of the isolated location.  Bruce Greenwood stars, with Matthew Davis, Olivia Williams, Scott Foley, Zach Galifianakis, Jason Flemyng and Dexter Fletcher.

There’s echoes of RIVER’S EDGE in this tale of a group of Oregon kids that take revenge against a bully on a boating trip, featuring some great performances and a fascinating depiction of teen life.

Yes, it’s three and a half hours, but there isn’t any wasted space in Wolfgang Peterson’s tale of a German U-boat during WWII, and it deserves a full evening worth of your attention.  And the German version is nearly 5 hours, so relax, you’re getting off easy.  Slacker.