Writing about what PULP FICTION means to you is like trying to squeeze an ounce of juice out of anything remotely linked to the Beatles. Everyone’s got a story or an experience, they either love it or can’t stand it, but rarely do we cross paths with someone who has no opinion on Quentin Tarantino’s F-bomb loaded masterpiece.

From the iconic poster hanging on walls around the world to Tarantino fanboys single handedly ruining the movie for every woman who’s had to endure them blabbing on about it during a date, to the hilariously bad overdubs for basic cable, PULP FICTION is embedded in our culture. There are even those Funko dolls of Jules and Vincent, let alone being spoofed on The Simpsons, as well as pretty much every other long-running comedy. 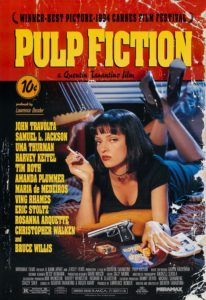 On the eve of the film’s twenty-fifth anniversary, a lot will be said, dissected, and analyzed given the film’s totality. The world of cinema changed after Quentin Tarantino charged onto the scene – Hollywood realized these folks making art on the fringes could have a voice, too.

There’s definitely aspects about PULP FICTION that haven’t aged well (the whole constant usage of the N-word thing), but by and large, PULP FICTION is still better than half of the movies that came in its wake. So many filmmakers have tried to copy what that movie did: from how it was shot, the story layout to how criminals speak to one another. While films like HIS GIRL FRIDAY, THE SEVEN DEADLY VENOMS, and BLOW OUT set the tone for Tarantino’s world, PULP FICTION blew expectations out of the water. The violent underbelly of Los Angeles sounded and felt a lot cooler than anything we’d seen before in crime flicks like KING OF NEW YORK, SCARFACE, or even THE GODFATHER. Who the hell else was yammering away about foot massage technique or Royales with cheese before Tarantino noticed the subtle difference while he was writing the script from his cheap apartment along the Amstel?

Seeing PULP FICTION in the theater back in 1994 as a 13-year-old changed my life. Up until that summer, movies were just THE TERMINATOR or STAR WARS. I’d seen THE WARRIORS or ENTER THE DRAGON with my dad, but that year I was exposed to RESERVOIR DOGS, AKIRA, THE CROW, MALLRATS, CLERKS, and by summer’s end, PULP FICTION. While all of those other movies rocked my brainpan with substance and vibrato, it was Tarantino’s ability to seamlessly move through worlds of longhaired junky’s, tragic femme fatales, and of course Ezekiel 25:17. Seeing that art was more than explosions and monsters, it made creating things real – like, hey I could do that, too. PULP FICTION planted a seed, one that by the time I’d reached seventeen, realized I wanted to tell stories like Tarantino, so I became a writer.

PULP FICTION wasn’t galaxies blowing up, or archeologists sweating over holy grails but instead made gangsters feel like everyday people while showing a side of the world that was filled with grim realities, but ones that felt like they lived in the same apartment complex as you. That’s why the film has always appealed to me and why I continually watch it through the years: there are so many social and psychological complexities going on: from interracial relationships to hit men finding god, the appeal of a high priced beverage or just two guys winding up in a pawn shop basement, there’s a lot to unpack at every turn. 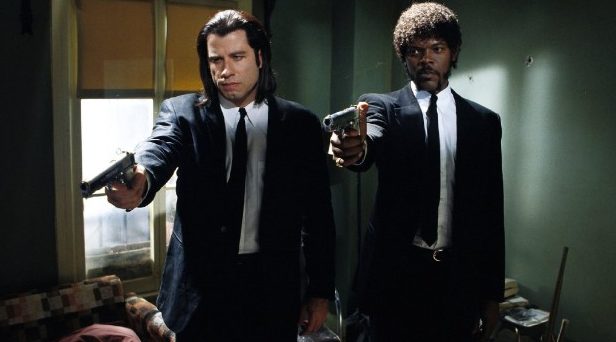 Many of us in the world of writing has seen the classic pulpy tropes dragged out time and time again, but it’s still impossible to find a better down on his luck boxer than Butch Coolidge. Does a cooler criminal exist who’s not named Jules Winnfield?

I often think about when people experience things for the first time. I can’t fathom what hearing the Rolling Stones “Gimme Shelter” felt like for the world, or when THE EMPIRE STRIKES BACK exploded into theaters, but many times I wonder what it felt like to be in that room in Cannes when PULP FICTION walked away with the Palme d’Or. While it was exciting for me as a boy, I can’t imagine how the introduction of Dick Dale’s lighting fast “Misirlou” set the emotional stakes in the theater. Twelve days of art films, dramas, independent darlings, and then Quentin Tarantino rolls in all fast-talking, being the odd duck he is and drops a psychological bomb, which then he plays in the mangled body parts left when the film stopped rolling. Roger Ebert said PULP FICTION was “the most influential” movie of the 1990s, “so well-written in a scruffy, fanzine way that you want to rub noses in it—the noses of those zombie writers who take ‘screenwriting’ classes that teach them the formulas for ‘hit films.’ ” And then here comes the ex-video clerk, a guy who got his shot, who also managed to make the whole thing for under $9M, which in movie money, is peanuts.

Even the music is curated, feels different. There’s a cool chaos, but also a tonality that those obscure grooves shed light upon: we’ll never hear songs like Chuck Berry’s “You Never Can Tell” (a B-side) or Urge Overkill covering “Girl, You’ll Be a Woman Soon” without thinking of Mia Wallace both grooving or coming an inch from death.

I remember kids at school talking about FORREST GUMP and how Tom Hanks goofy adventures blew their minds. Meanwhile, Mr. Cool over here was freaking out over John Travolta slamming a hypodermic needle straight into Uma Thurman’s chest. As the books and years go by there are little nods in all of my work to a few creations I hold dear to my heart, but no piece of art has affected me like PULP FICTION has. All three of my books have subtle nods in them as well as my screenplay. That movie, those characters haunt me in the best and worst ways possible.

Twenty-five years later, PULP FICTION still feels fresh. The delicious bloodwork of the murder comedy is rightfully placed in Time magazine’s top 100 movies of all time. Some of the believability of PULP FICTION‘s madness is how all of the characters spent their time preparing for their roles: Travolta hung with junkys while Uma Thurman learned how to spice up her language and embrace her inner demons. Ringo and Honey Bunny give a love that burns, a dedication to one another through their misfit criminal lives, which neither of them are prepared to face the consequences of. Because there’s a light comedic touch, all of the obsidian moments work, thanks to a constant push and pull of two contract killers staring into the eyes of yuppie dead men eating burgers for breakfast, but first draining a Sprite in one pull. Coffee shops, watches shoved up asses, samurai swords, and a pack of Red Apples, there’s an infectious love that’s there somehow, under all of the filth, just below poor Marvin’s splattered brains in the backseat of Jules ride, which no one managed to scratch, unlike Vincent’s cherry red Malibu.

I constantly examine PULP FICTION because for me, it’s like a maze, a puzzle. There’s secrets still there, things to be unlocked. Tarantino will forever be one of my biggest influences and Pulp Fiction, the most important cultural touchstone of my creative life. I’m not saying I want to be him, I’m just on front street that I’ve got a Masters from The Tarantino School of how not to cross a motherfucker. So, don’t touch my briefcase. 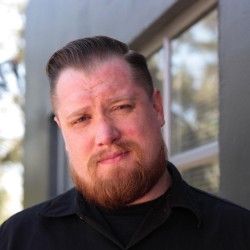