There is possibly no more tried-and-true horror trope than that of a backwoods hillbilly family who finds pleasure in torturing and killing  poor unfortunate victims who just happen to cross their paths. My earliest recollection of this is in Jack Hill’s 1967 classic SPIDER BABY. Throughout the years, we’ve seen it time and time again. From classic films like THE TEXAS CHAINSAW MASSACRE and THE HILLS HAVE EYES, to more modern horror films such as WRONG TURN and HOUSE OF 1,000 CORPSES, to lesser-known genre fare like  SKINNED DEEP and AMERICAN GOTHIC, one detail is just about universal — all these films have always depicted these antagonistic family units as Caucasian. That’s where BUNNYMAN VENGEANCE takes this exhausted cliche, and turns it on its head. Casting the psychotic kinfolk as African-American makes this film seem fresh and exciting. 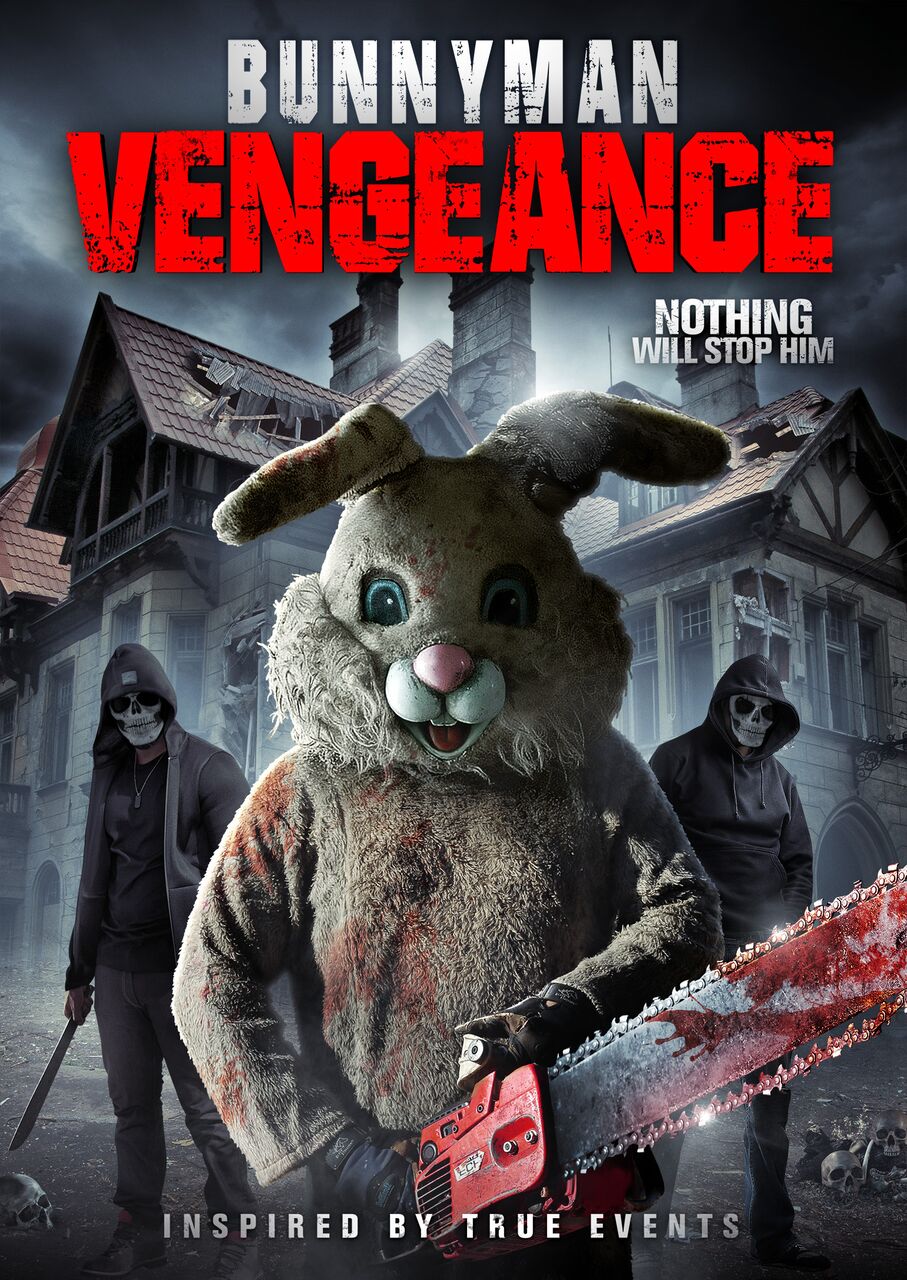 Once I realized that BUNNYMAN VENGEANCE was the third entry into a BUNNYMAN trilogy, I began to worry that I would be lost, since I hadn’t seen the first two films, BUNNYMAN (2011) and THE BUNNYMAN MASSACRE (2014). Luckily for me, that wasn’t the case. I quickly caught up with the story of Bunnyman, a.k.a. Michael (director Carl Lindbergh), and his three brothers Carl (Omari Washington), John (Michael Shaun Sandy), and Jacob (Pucci Tres).

These four psychotic brothers live in an abandoned haunted house in the middle of nowhere. Their favorite hobbies are murder and torture. Not only do they kill and torture dimwitted horror fodder, i.e. idiotic campers and dumbasses who poke their noses around where it doesn’t belong, but they also like to incorporate their victim’s corpses into the decor of the haunted house, because eventually they open the house as an attraction to the public. This is when family tensions grow, and the brothers’ plans go awry.

The Bunnyman is a mute brutal killer — in that sense he is reminiscent of Jason Voorhees. Even many of Bunnyman’s kills and mannerisms seem copied from old hockey-mask face. I prefer my slashers with a witty sense of humor, so normally I would find this offsetting, except that this guy is wearing a grimy giant bunny suit covered in filth, and I can dig that kind of disturbing weirdness in a big way.

As bonkers as the Bunnyman is, his two older bothers far outdo him in the cuckoo department. In amazing grainy flashback sequences that look like old home movies, the origins of the Bunnyman are revealed. It shows that as children, Michael’s two older brothers John and Carl burn him alive and piss on him while he’s on fire. The only reason Michael survives and becomes the Bunnyman is because his mentally-challenged brother Jacob extinguishes the fire. I feel bad for Jacob. If you took the most sympathetic aspects of Leatherface and gave him vocal abilities, you’d have the character of Jacob. On the complete other end of the spectrum, John and Carl seem to be fighting it out over who can be the biggest Otis Driftwood copycat.

The rural dessert setting is perfect for BUNNYMAN VENGEANCE. It gave me complete DEVIL’S REJECTS vibes, with a pinch of THE HILLS HAVE EYES for good measure, and the fact that they live in an abandoned haunted house is really cool. The whole aesthetic of the film is very Rob Zombie — it’s gritty and over-the-top violent. For me, it really made it an enjoyable film to watch. There’s even a section of the film where Bunnyman gets shot up with drugs, and what ensues is a CGI-heavy, hallucinatory music video.

BUNNYMAN VENGEANCE is one for the gorehounds. Lots of brutal and creative kills keep things interesting from beginning to end. Shovels, machetes, guns, and even a victim being forced to drink acid all had me clapping and cheering for these dysfunctional brothers. Hunting humans… is my favorite spectator sport.

The climax of the movie is the only place where any sort of “vengeance” comes into play. The story for BUNNYMAN VENGEANCE admittedly isn’t the exactly the most well put-together. It’s actually pretty clunky in places, but if you’re watching a movie like this for the story, then you’re watching the wrong kind of movie. Get fucked up and watch some fucked-up shit.