There’s not a big secret as to the clichéd plot that makes me instantly pay attention – get a bunch of diverse people, stick ‘em in a remote location, and pick ‘em off one by one as they have a variety of conflicts and become increasingly panicked. It’s the premise of about 40% of all horror films, and it’s a simple enough set-up that leaves enough room for interpretation to be incredibly great or incredibly awful.

It’s also the premise for “Survivor,” the remake of the Swedish TV series “Expedition Robinson” that debuted to sudden popularity during the summer of 2000. It launched the boom in the reality television genre, and along with it the boom in people telling reality show fans that “you know it’s not REALLY reality, don’t you?” in the most condescending manner possible, the way a previous decade’s snotty elitists mentioned offhandedly that they don’t even OWN a television. (Hint: We know. We don’t care. Everything on television south of C-SPAN is at least partially “de-truthed” thanks to editing, recreations, and the observer effect, but that doesn’t make it any less interesting.)

For the past 15 years, Jeff Probst has been the host of the show, at first relegated to asking a few questions and explaining rules and now over-emphasizing everything happening in any given challenge as though he’s a background character in a Troma film. Outside of the premise and having “Boston” Rob Mariano on the show until he won like the weakly kid who finally manages to hit the ball off of the tee by having it placed at exactly his height, Probst has been the only uniting factor in all of the show’s 28 (!) seasons, the most recent of which ends next week.

But Probst isn’t just a human reaction shot of counterfeit astonishment or the world’s most redundant running commentary track. His non-“Survivor” related passions go far beyond asking probing questions and well into creating art itself.   No, not “Rock & Roll Jeopardy” or answering viewer mail for the fledgling FX network, but actually writing and directing films.

This is probably not a surprising revelation for “Survivor” superfans. Probst’s 2001 film FINDER’S FEE, shot just as “Survivor” was beginning, is a solid poker thriller with a good cast, including James Earl Jones, Robert Forster, Matthew Lillard and Ryan Reynolds that managed to get a bit of attention even if it went straight to DVD. More recently, he helmed the coming of age drama KISS ME with John Corbett that opens in theaters later this year.

But what about his first film? 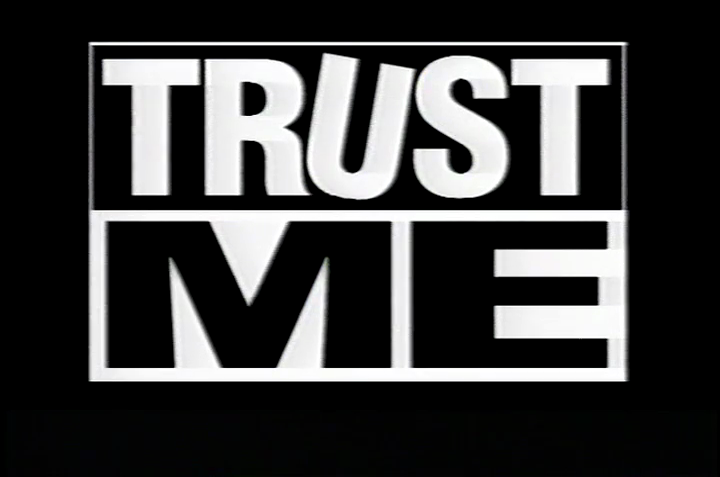 FINDER’S FEE isn’t it, despite most sources alluding to it as his debut. Heck, it’s even mentioned as his “first feature” in this interview with him, in which he mentions having “made a small movie with some friends!” His first film isn’t mentioned on Probst’s Wikipedia page or on his website – it doesn’t even have an IMDb page!

TRUST ME, Probst’s true debut film, which he wrote, directed, edited and executively produced, isn’t just a “small movie with some friends,” as he suggests. It’s a feature-length ‘90s road movie with a definitive style and voice. Sure, it’s a little bit of a mess, but it’s far from shameful, and I can’t quite figure out why virtually the only information I can find on the film is a few mentions of it playing in festivals, like this piece that describes Probst as “a local actor-writer-director-producer who one hosted KIRO-TV’s ‘Home and Garden Show.’” The film was even released to video, courtesy Leo, the relatively tiny distributor who specialized in indie and genre films and English-language imports with the hopes that it could stumble upon a new Tarantino. (It didn’t.)

Shot in 1994 with a cast composed mostly of local theater actors, TRUST ME stars Therese Tinling as Alex, who starts the film by stumbling across video evidence of her senator boyfriend (Bob Morrisey) cheating on her. Storming out with the tape and taking to the road without any money, Alex soon meets up with Jeremy (Adrian LaTourelle), a scrawny young man in a large black hat and a hockey stick who talks her into giving him a lift to Red Creek, Montana with the promise of $2500 when they get there. 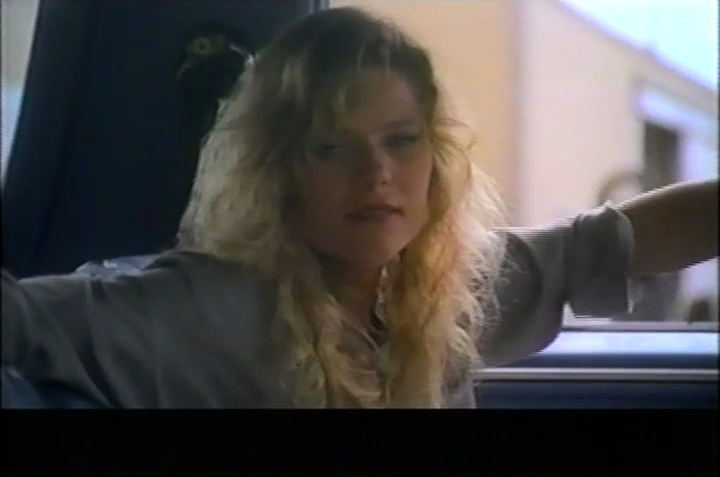 It’s soon revealed that Jeremy is a hitman who has recently completed a job – or has he? Evidence against him mounts when he’s reluctant to shoot a man who assaults them in a hotel room after an altercation at a nearby diner.   Meanwhile, high-strung reporter Peg (Cindy Shrieve) smells a story and begins tailing the two, and the senator sends out a sugar-crazed psycho (Jevon Hull) to get the tape back.

The ‘90s saw such a huge influx of low-budget road movies with quirky characters and sudden violence that it’s no wonder why TRUST ME never has much of an impact. By 1994, the decade had already produced HIGHWAY 61, MOTORAMA, ROADSIDE PROPHETS, THE LIVING END, LEAVING NORMAL, FRAMEUP, JOSH AND S.A.M., LOVE AND A .45 and ROAD KILL U.S.A. – and those are just the ones that come immediately to mind. TRUST ME occasionally feels like a Hal Hartley film that never quite finds its vibe, and its quirks come across as “weirdness for the sake of weirdness” rather than pieces of a coherent film, a very common problem in many of the indie crime/road flicks of the era. 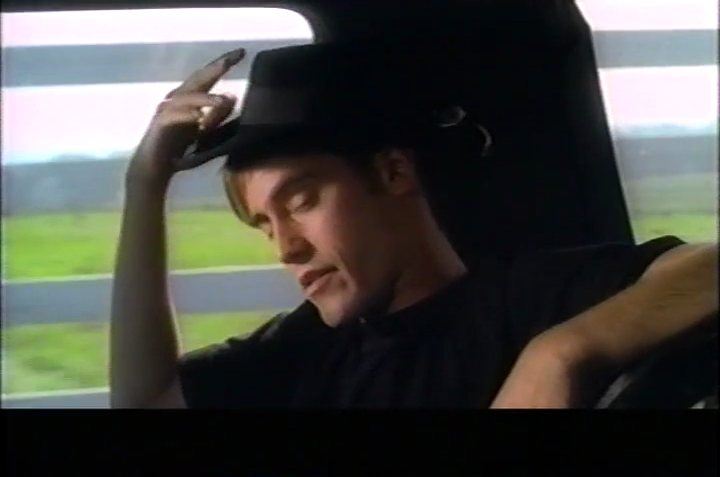 This doesn’t mean there’s not a fair amount to like in the film, and while the forced humor can be occasionally off-putting, it’s never dull, and the bizarre situations our duo (and later, trio, as Peg soon joins them) finds themselves in never stick around too long.  Tinling and LaTourelle make for affable leads, and the film never really forces a romantic relationship between them — which is for the best, as they’re both pretty awkward characters that clearly aren’t good at dealing with people.

TRUST ME has the “quirky” aspect covered with a female foot fetishist who forces Jeremy to take off his shoes and socks at gunpoint, the reporter who spunkily says things like “Don’t trust me, I’m on television!” and a sequence involving Alex’s sister’s phone sex operation. All of which could be turned into interesting sequences with the proper hand (though there’s no saving Hull’s frenetic henchman) and the film certainly features more than a fair share of above-average performances – the problem is that they all seem to be in different movies, and few of the characters, including the two leads, rarely connect with anything resembling chemistry. 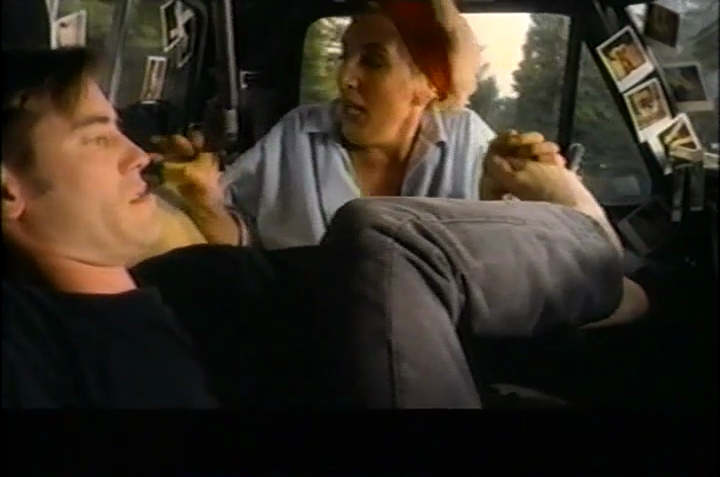 But TRUST ME shouldn’t be lost to the internet ether – while it shows a lack of polish and it’s obviously a first film, it’s certainly not a terrible one and it doesn’t lack for ideas. One would think Probst would at least acknowledge it on his site (or even re-release the title himself), as it’s a relatively charming little flick that he should be proud of. It’s certainly better than anything involving a Hantz.