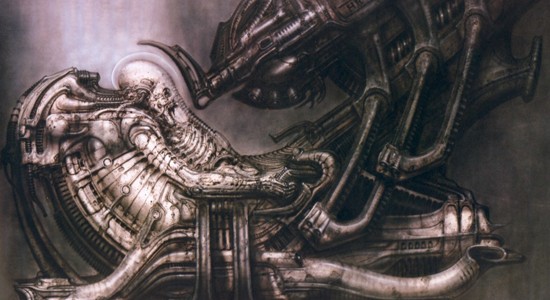 Artist H.R. Giger has died at 74. Best known as the creator of the designer of the creature from ALIEN, his film work also includes designs for SPECIES and KILLER CONDOM and the poster art for FUTURE-KILL. He recently appeared in JODOROWSKY’S DUNE talking about that aborted project as well. He also designed art for the video game DARK SEED and its sequel and the shorts HEIM-KILLER and HIGH, which you can watch here:

VIDEODROME actor Les Carlson has died at the age of 81. See him in the Cronenberg-directed short film CAMERA here.

Richard Feren remembers the horror-influenced musician Nash the Slash, who passed away earlier this week.

The Rialto Report answers the question posed by 1968’s THE CURSE OF HER FLESH – “Whatever Happened to Gigi Darlene?”

Mike “McBeardo” McPadden counts down the 20 Greatest Metal Films of All Time.  His new book on the subject is due out this spring.

The 1988 killer electricity flick PULSE gets a huge retrospective courtesy William S. Wilson, who talks to writer-director Paul Golding in an extensive interview.

DG’s Freeman Williams writes about THE GOSPEL ACCORDING TO ST. MATTHEW, THE HONEYMOON KILLERS and MY DARLING CLEMENTINE – at least one of which will be covered on an upcoming Daily Grindhouse podcast.

Our Matt Wedge continues his look at the work of Larry Cohen with a piece on the Cohen-written UNCLE SAM.

SHARKNADO returns to theaters with the RiffTrax guys.

You can buy “Dracula’s Castle.” Inquire within.

Fan-made trailer shows that it would be possible to do a live-action AKIRA well: