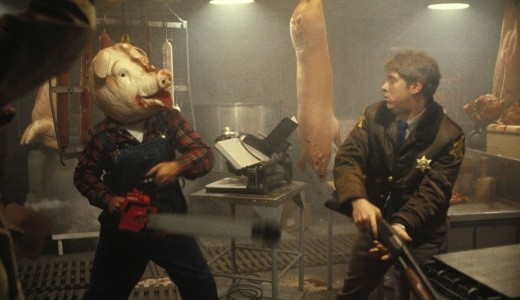 The following is a press release from Arrow Films. For more release announcements from Arrow and other distributors click here.

Fully restored and finally available on Blu-ray for the very first time (anywhere in the world),MOTEL HELL is a prime cut of 1980’s cult cinema. Directed by Englishman Kevin Connorand starring a host of drive-in movie legends, it’s a bloody, gruesome and horrific barrel of laughs.

As with previous critically acclaimed releases, including George A. Romero’s “Knightriders”, Mario Bava’s “Baron Blood” and Lucio Fulci’s “Zombie Flesh Eaters”, MOTEL HELL has been given the “Arrow treatment”. In addition to the beautiful high-def restoration, this deluxe Blu-ray & DVD dual format edition will come complete with a wealth of special features and bonus material, including director’s audio commentary and filmed interviews with cast members, three brand new and exclusive featurettes, original trailers and promotional material, and a collectors booklet featuring new writing on the film by renowned critic Kim Newman alongside extracts from MOTEL HELL the comic book.

Even the packaging is a collector’s item; it features a reversible sleeve with both original and newly commissioned artwork by the fantastic Jeff Zornow.

“It takes all kinds of critters to make Farmer Vincent fritters” cackle Vincent and Ida Smith, the brother-and-sister team behind the finest smoked meats in the county.

Set in a fictitious town in the Deep South, people come from far and wide to sample Vincent’s distinctively flavoured produce, but one might well ask why so few of them decide to stay at the near-by motel the family also runs.

Affectionately named “Motel Hello” (although the ‘o’ in the neon sign frequently goes on the blink), passers-by do occasionally check-in… but they NEVER check-out! Something to do with Farmer Vincent’s secret ingredient perhaps, the thing that makes his fritters taste so darn good?

The special features and bonus material is as follows:

– Optional English SDH subtitles for the deaf and hard of hearing.

– “Another Head on the Chopping Block” – Interview with star Paul Linke.

– “From Glamour to Gore” – Interview with co-star, and former Playboy Playmate, Rosanne Katon

– “Back to the Backwoods” – Director Dave Parker (The Hills Run Red) speaks about the importance of Motel Hell.