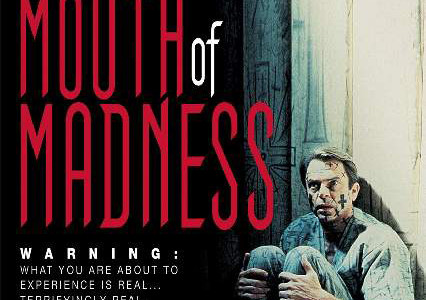 John Carpenter’s IN THE MOUTH OF MADNESS is finally making its way to Blu-ray. New Line Cinema locked up October 15th to street the underrated Carpenter flick, just in time for your Halloween chills. No specs or features are available but we’ll let you know the moment they are announced.

After the unfortunate misstep of MEMOIRS OF AN INVISIBLE MAN, Carpenter made a return to horror with an incredibly capable cast that includes Sam Neil in one of his best roles. IN THE MOUTH OF MADNESS is a conclusion to the “Apocalypse Trilogy” and a sequel of sorts to PRINCE OF DARKNESS, only now the demon or anti-god has found a way to set himself free of the shackles that confine him. This film, at its core, is a very interesting discussion on the role of horror in our society, and to some extent the issue of censorship, wrapped in a terrifying lovecraftian tale. Written by Michael De Luca, produced by Sandy King.