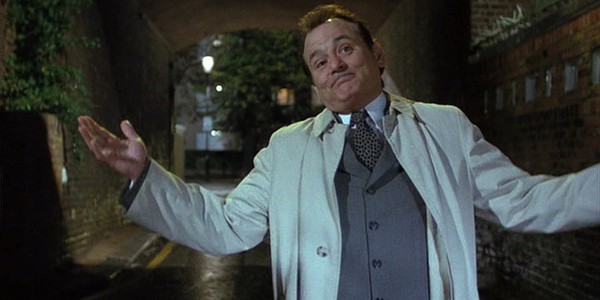 August isn’t always the best month for interesting theatrical releases, but a lot of big stuff is hitting Blu-Ray and DVD this month. This week is relatively light, but next week is going to be bananas. So let’s get right to it, and please remember, if you plan to order any of the titles you see here, please click through the cover icons and purchase them through us. We’ll be your best friend! Had a bunch of thoughts about this movie in particular and about the wave of dystopian young-adult science-fiction-light in general, and you can read those here. Nothing new to add; still haven’t seen the movie.

I’ve never really known what to do with this movie. It arrived in America not long after TRAINSPOTTING, in which Robert Carlyle made such a phenomenally monstrous impression. The entire point of THE FULL MONTY is that Carlyle is playing a remarkably average guy, relatable, decent, one of a group of similar normal fellas, and I just wasn’t interested in that at the time. To be fair, this was never going to be a premise to burn bright enough for me to flutter over. The kind of movies I love best, they haven’t figured out how to make musicals out of. This isn’t for me, probably, no hard feelings, knock yourself out if you’re so inclined.

Tell us more about theology, Professor Hercules. GOD’S NOT DEAD is part of the unofficial sequence of modern films featuring Kevin Sorbo and existentialist thinking which includes the 2011 inspirational shark-attack film SOUL SURFER, about which I had a lot more to say than you might expect. Of course God cannot be dead, because if He were, the shark would have taken a leg rather than an arm from that surfer girl. She can still surf, and that alone proves the existence of God. If you don’t believe it, ask Colton Burpo.

It’s not nice to make fun of people’s beliefs, but I do it here because I resent the defensive posture of a title like GOD’S NOT DEAD. This is the same kind of thinking that makes people put up “Keep The Christ In Christmas” signs in November and keep them up until March, for some reason. It’s more than a little bit paranoid. Who was ever threatening to take Christ out of Christmas? Who ever said God was dead? Aside from Friedrich Nietzche and Trent Reznor, I’m pretty sure nobody has. What these evangelical dorks are truly objecting to is any viewpoint that doesn’t match up precisely with their own. It is possible to live a rewarding live of faith without worrying about what other people are doing, though these people would never know it. They’re threatened by the growth of atheism. But “God is dead” isn’t something an atheist thinks. God can’t be dead if God never existed. If God died, God is real, just dead. So what are we even arguing about?

Pretty sure I’m gonna transfer to whichever theology class is being tought by Xena Warrior Princess. 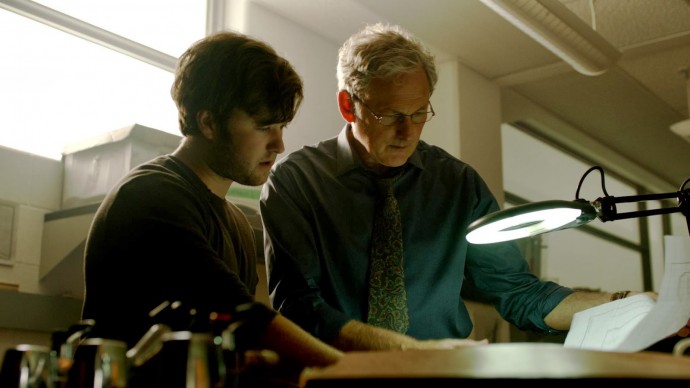 This is a sci-fi mystery starring a bunch of people well-known for appearances in more famous sci-fi mysteries, like Gillian Anderson, Rufus Sewell, Victor Garber, and Haley Joel Osment. This is the first I’m hearing of it, but for Victor Garber alone it’s probably worth a look.

The very bloody sequel to the bloody 2011 action film, IRONCLAD 2 doesn’t have well-known actors like its predecessor but it does deliver on other fronts. My full review is forthcoming.

Nobody will admit it now, but it hasn’t always been popularly-accepted knowledge that Bill Murray is the best. Everyone’s on the bandwagon today, but where were all of you in 1997? Because I was in the multiplex and I didn’t see none of y’all. Not even you, Wes Anderson. THE MAN WHO KNEW TOO LITTLE represents the third collaboration between Bill Murray and Howard Franklin, who was Bill Murray’s co-director on 1990’s QUICK CHANGE, who wrote and directed LARGER THAN LIFE (that’s the one where Bill Murray inherits an elephant and yes I also saw this one in the theater), and who co-wrote this film, which was directed by Jon Amiel. THE MAN WHO KNEW TOO LITTLE is a farce, a send-up both of Hitchcock wrong-man thrillers and 1960s British spy romances. It’s a bit of an anomaly because by this point, Bill Murray had a well-worn comedic persona, the one we recognize in movies like MEATBALLS, STRIPES, TOOTSIE, GHOSTBUSTERS, SCROOGED, QUICK CHANGE, GROUNDHOG DAY, and MAD DOG & GLORY, the laconic and sardonic cynic with a romantic buried deep underneath. By this point, he wasn’t doing characters like he did on SNL and in CADDYSHACK. You might see him do the occasional character in cameos and bit parts like he did in LITTLE SHOP OF HORRORS and in ED WOOD, but if you really think about it, his career is largely composed of virtuosic variations on the “Bill Murray” persona, and it’s fairly rare to see Bill Murray stepping too far outside of that sphere. One exception is WHAT ABOUT BOB?, where he plays a lovable naïf, unintentionally troublesome, endearing to some and maddening to others. That’s largely what he’s doing here, although here he’s even more of an innocent and a bumbler. Quite frankly it isn’t a “Bill Murray” role at all — if you were the casting director on this movie, you could easier imagine anyone from Peter Sellers to Chris Farley doing the part before you’d think to call Bill Murray. Like LARGER THAN LIFE, it was a financial failure. Beyond the fact that the success of star-based comedy has plenty to do with recognizable personas, there had been a shift in the culture at the time. Both LARGER THAN LIFE and THE MAN WHO KNEW TOO LITTLE were throwbacks, sweet-natured comedies with affection for the films of earlier eras. The mid-to-late 199os were usurped by comedians like Adam Sandler and Jim Carrey, with styles that were rambunctious, rude, and somewhat deranged. Even Bill Murray’s de facto mode — laidback — wasn’t in vogue at the time. Hysteria was the mode of the moment. Not only was Bill Murray not playing his de facto mode; he was trying something new, mixing in a more obvious sweetness. I would bet if you went back to  LARGER THAN LIFE and THE MAN WHO KNEW TOO LITTLE you would find them enjoyable, if a little bland, with a couple great jokes surrounded by a bunch of vanilla ones (by the way vanilla is delicious, don’t knock vanilla) but at the time of theatrical release, they were lost in the noise. This is possibly why Bill Murray made the shift to low-fi indie-type film soon thereafter; either that or it was fortuitous timing. Personally, I have a need for [MOTHER, JUGS AND] SPEED, but that’s just me. That’s just what I like. I do need SPEED, but without MOTHER and JUGS, it’s just not a movie I can care about.

Now that it’s come up, I won’t be satiated until I have it. Let’s go.

So far this has been a light year for horror — I mean there hasn’t even been too much out there, let alone anything good — so I’d tentatively call this a highlight. OCULUS has some good fright bits, though ultimately there’s only so much you can do with a mirror. I wasn’t too impressed with the kid playing the brother, but Karen Gillan, the lead actress, is interestingly frustrating as a would-be ghostbuster who only thinks she has everything planned out to the letter. OCULUS is a low-key mind-bender that, once it gets going, gets some good suspenseful momentum going before ending rather abruptly — I think that’s kind of the point, but it’s not the most satisfying ending a movie ever provided. This movie is definitely worth a look; just don’t expect a harrowing masterwork or anything.

Maybe it’s a copout to say so, but I could either write twenty pages on this movie or nothing at all. If you haven’t seen it, pick up a copy. Trust me. If you’re already a fan, you probably have this sweet new edition from Scream Factory on order already. It’s a must-see-several-times. Here’s a little drawing I did of the title character: 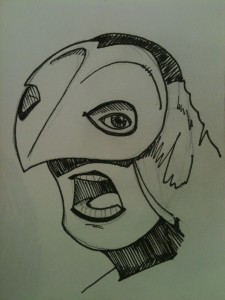 It’s the rare brand I trust, but this documentary is being distributed by Oscilloscope Laboratories, the company co-founded by Adam Yauch (RIP and man I am still not used to having to write “RIP” after his name). I haven’t seen every movie released by Oscilloscope, but every movie I have seen of theirs I’ve liked a lot. So I will give this one a shot as soon as the opportunity arises.

This is a documentary about what’s happening right now in the Gaza Strip. I’m gonna ask this question of you, but only because I have been asking it of myself a lot lately: Shouldn’t I be watching and talking about more movies like this one rather than movies like LUCY and GUARDIANS OF THE GALAXY? Maybe not. But maybe. 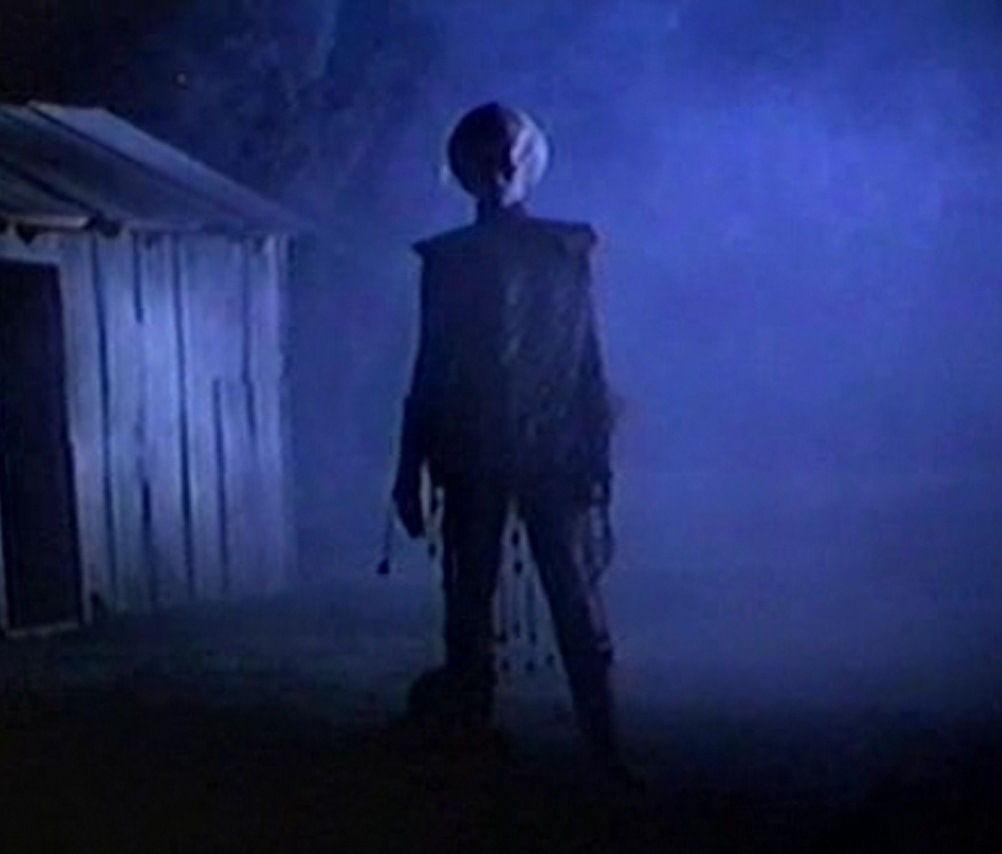 I have been told that this horror movie, out in new packaging from Scream Factory, is basically PREDATOR with a much goofier alien. Let’s take a closer look at that guy… 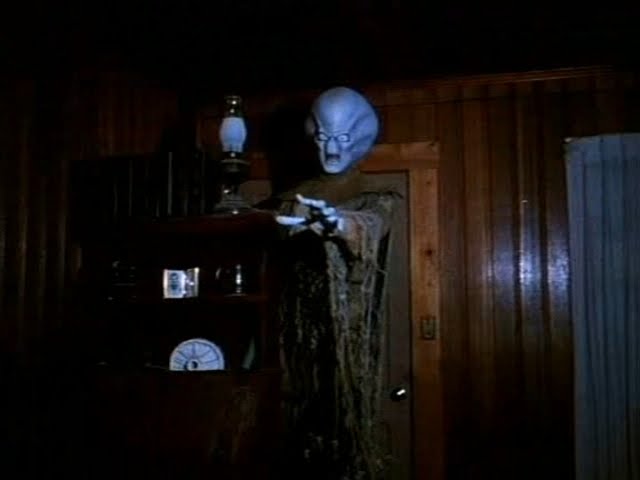