In the early-to-mid-‘80s, we Earthlings were a paranoid people when it came to nuclear war. We were so convinced that at any moment, air raid sirens would go off and we’d be forced to either huddle in our basements with our canned lima beans or pretend that “duck and cover” actually worked. And like any mass-populous psychological trend, we made movies based on this feeling on imminent demise.

It was a paranoia distinct from the “patriotic” Cold War paranoia that begat the likes of RED DAWN. In films like THE DAY AFTER, TESTAMENT, THREADS and WHEN THE WIND BLOWS, a nuclear apocalypse wasn’t a cause for a triumph of the human spirit over some imagined enemy – it was a depiction of certain death as the survivors of the blast struggled to remain breathing for as long as possible until the inevitable occurred. We knew going into the opening credits that things weren’t going to end well for everyone involved – these were films about humanity in the face of its own demise, not excuses to wave the flag and villainize our political rivals.

While there have certainly been plenty of post-nuclear apocalypse films made since the fall of the Berlin Wall and the last few years had an influx of “end of the world” cinema, most of the works in these camps are designed to be crowd-pleasers rather than character dramas. Their tactics to please may change, ranging from comedy (THE WORLD’S END, IT’S A DISASTER) to epic adventure (2012, THE DAY AFTER TOMORROW) to religious proselytism (REVELATION ROAD, LEFT BEHIND) to basic exploitation (virtually every MAD MAX rip-off in the last 30 years), but the end of the world is now a joke, a spectacle or an excuse for judgment, mayhem and desert locales and ripped clothing. There are a few exceptions, like THE ROAD and MELANCHOLIA, but for the most part, they’re films geared more towards the art house crowd – nothing close to the experience of nuclear horror universally shared by the 100 million people who tuned in to watch THE DAY AFTER in 1983. 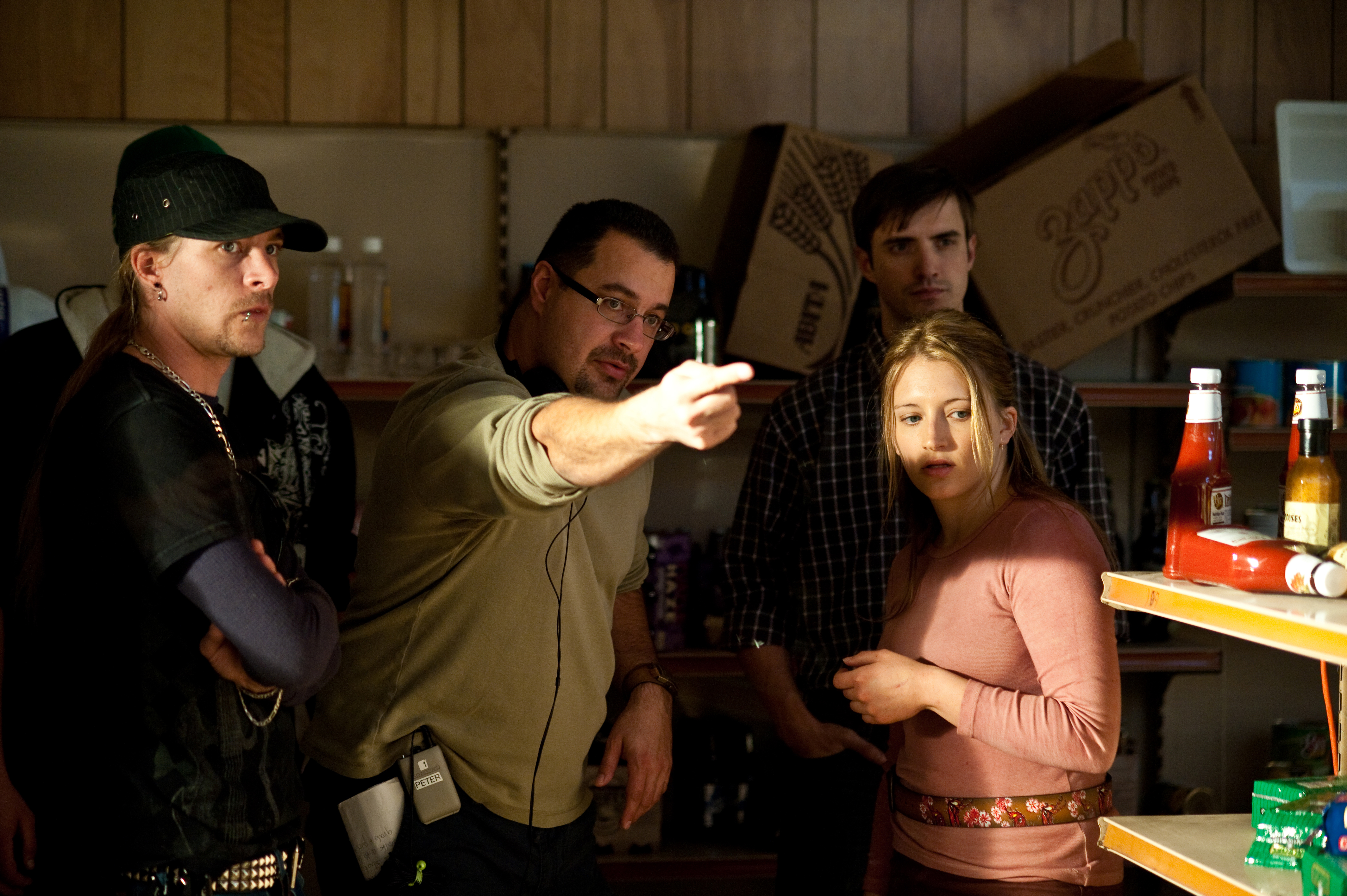 Peter Engert’s AFTERMATH is something of a throwback to the ‘80s era of nuclear survivalist paranoia, despite the relatively generic cover art of a person in a Hazmat suit that never appears in the film. The film opens with a nuclear bomb exploding on the horizon, and the rest of the running time features the cast gathering and then holing up in a basement, struggling to figure out what to do next as they begin to get increasingly weak and the now-mutated outsiders try to force their way in. Everyone involved is just trying to survive, and there’s the overwhelming feeling that they’re just treading water on an endless ocean, waiting to drown.

So, yeah, AFTERMATH is pretty bleak right from the concept. In a rural area of Texas, Hunter (C.J. Thomason) appears to be hitchhiking when he meets a woman and her younger brother driving out in the middle of nowhere as the bombs go off. The trio switches to a more enduring mode of transportation and meets up with Elizabeth (Monica Keena), another young woman trying to make her way to safety. Safety, or the closest thing to it, comes in the form of the basement in an isolated house populated by the owners’ grandson Jonathan (Ross Britz), a high-strung neighbor (Edward Furlong), his pregnant wife and the grandson’s elderly uncle. Together, they attempt to get the radio working and struggle to keep sanity in check as the realization that help isn’t going to come any time soon slowly sinks in. 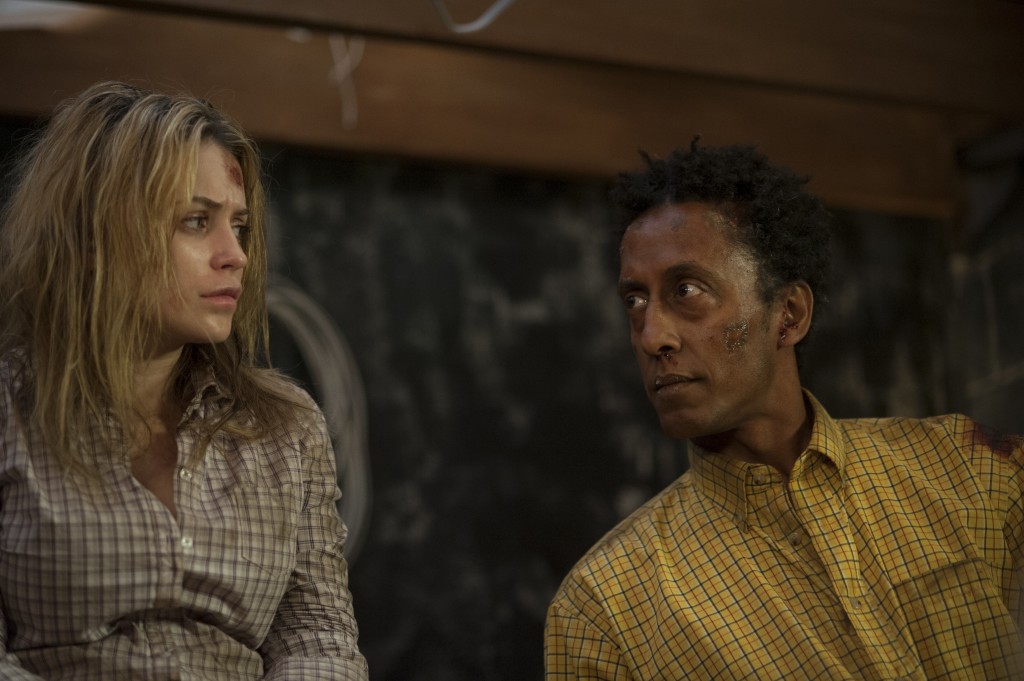 It’s a promising set-up, and certainly one rife with dramatic potential. Engert and writer Christian McDonald have clearly done their share of research as to how to actually survive in the aftermath of a nuclear blast, and Hunter clearly serves as the survivalist mouthpiece, as he quickly takes control over every situation and figures out the best way to preserve food, water and facilities in the tightly-knit group. The cast is solid, and the action sequences, once the “mutants” outside begin to make their way in, are generally well-shot despite random irritating freeze frame moments that feel rabidly out of place.

But, man, is AFTERMATH about five times as miserable as it should be. Granted, the premise of the film is structured to allow for the slow, painful deaths of just about everyone involved, but there’s nothing about AFTERMATH that gives you a sense of why these people should bother staying alive at all. Outside of a few brief moments in which we see two characters playing a game or Elizabeth reading to the young boy, AFTERMATH offers no backstory to how these people existed before the bomb went off and no idea as to what this eclectic group of people is doing to pass the time. 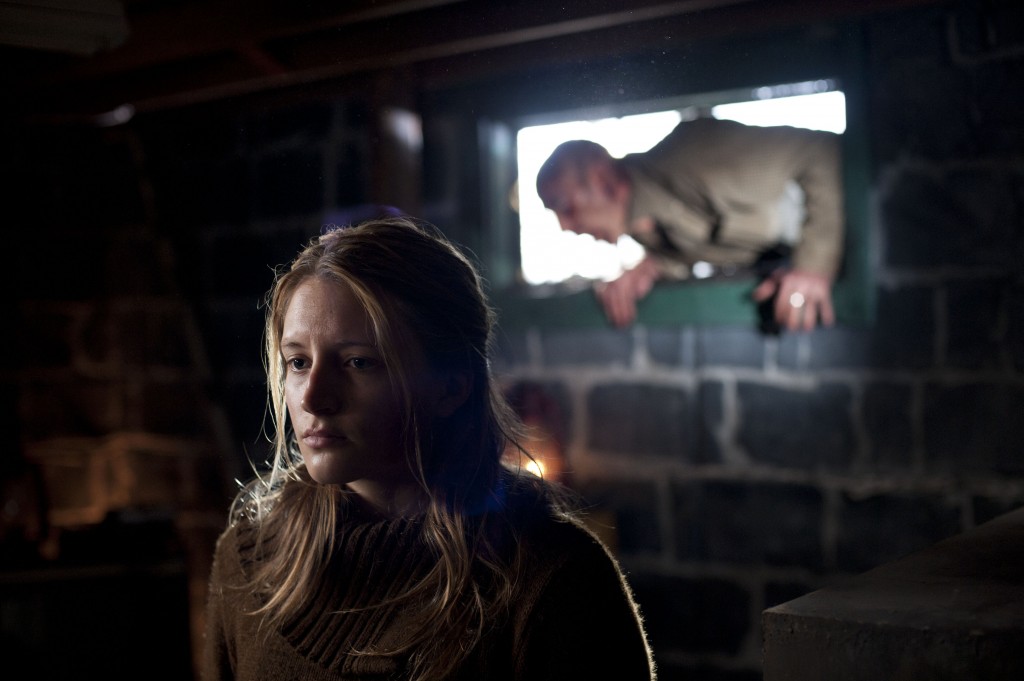 And there’s plenty of time to be passed. AFTERMATH takes place over the course of several weeks, a fact that registers only by on-screen titles, because the length of time doesn’t make much sense in the film at all. Never mind simple things like the lack of advanced facial hair on the guys or that the bunch looks way too clean to have been holed up in a running water-free basement for a month – the characters don’t even seem to be talking to each other outside of the footage we see either! Hunter discovers that Elizabeth is a nurse 17 days into the experience, meaning that the characters haven’t had a single conversation about their lives after being in the exact same space for two and a half weeks together!

As realistic as the survivalist mechanisms in AFTERMATH are, the characters are so underdeveloped and unbelievable in their interpersonal actions that the film loses all believability pretty quickly. You keep expecting characters to start, well, talking, but they never really do, and development of the supporting characters happens only from the point of view of the bland lead. Britz’s Jonathan and Andre Royo’s comic book store owner add a little bit of genuine empathy to the proceedings, but for the most part, AFTERMATH is essentially just watching a group of people you don’t know much about slowly dying. It’s sad and grim and miserable, but it’s hard to care. 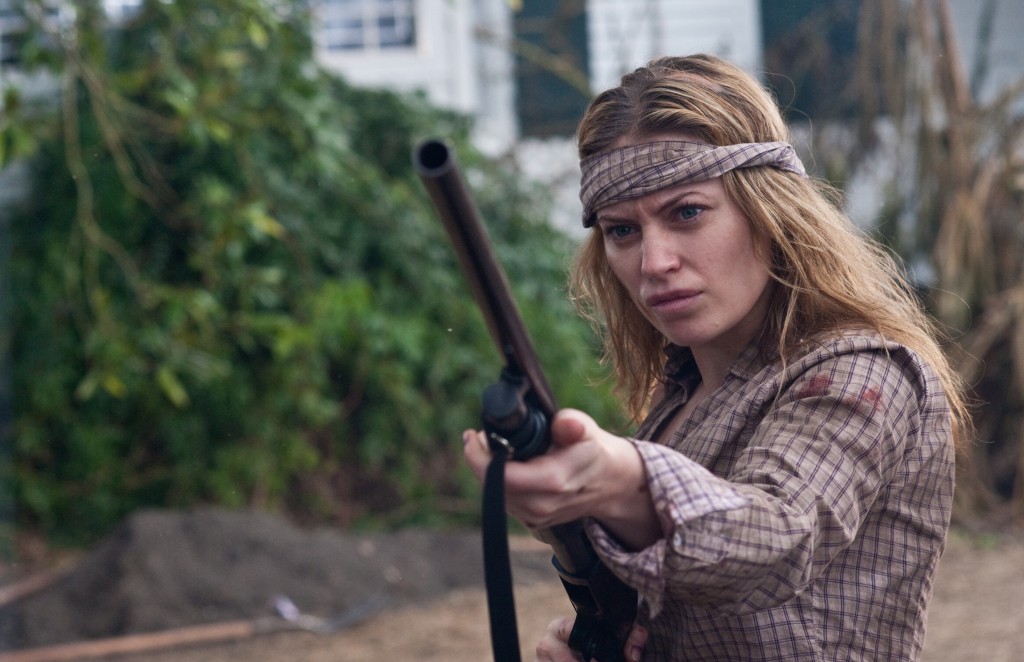 Yeah, it’s a bit odd to be bothered that a movie about a nuclear holocaust is unrelentingly grim, but AFTERMATH isn’t just grim, it’s totally joyless, a stark counter to the likes of THE DAY AFTER, TESTAMENT or THREADS. While those films were unmistakably dark and filled with impending death, they featured human beings that, while realizing their fate, seemed interested in not making life completely suck in any way they could. Even in THE ROAD, simple pleasures like peaches and Cheetos exist and are relished, and companionship is embraced rather than merely tolerated. AFTERMATH could conceptually be re-edited into a film that works, but the timeline would have to be severely re-structured, as the characters are so focused on SURVIVE SURVIVE SURVIVE that it becomes completely unbelievable that they’d be able to maintain that level of empathy-free single-mindedness for so long.

AFTERMATH is structured very similarly to NIGHT OF THE LIVING DEAD (and the action freeze-frames may, in fact, be an homage to the Romero classic) and while you can certainly say that NOTLD didn’t really develop who these characters were either, the world in which they inhabit is completely different. NOTLD takes place over a series of hours and involves characters who are genuinely fighting for their lives with the actual hope of getting out alive. AFTERMATH’s scenario is a no-win situation as well, and the characters (slowly) realize this, so the fact that they really do nothing to try to make the best of the limited time they have left (especially after several weeks!) just reflects on them as being the last people with which you’d want to spend your last remaining days. AFTERMATH’s group of survivors is fighting for their lives, but they don’t seem to have any interest in living.  It’s a shame, as Enghert is a promising director — I’d be much more interested in a film he helmed that had people in it.

AFTERMATH is in Theaters and on VOD this Friday, July 18th.