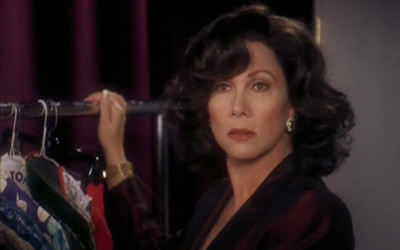 
Even now, nobody is quite sure what caused Hurricane Jacqueline Susann to hit the world once more at the end of the 20th Century. She may have left this mortal plain in 1974, but twenty-five years later, her spirit returned with a vengeance, returning from the grave with a pair of biographical films recounting the details of the sordid life of a woman who specialized in writing about the sordid lives of others. Having become a bigger-than-life cultural phenomenon in her time was good, but for someone like Jacqueline Susann, once was not enough.

Or at least that’s what filmmakers thought. The span of 13 months saw the release of two different bio-pics of the soap author, making their rivalry the LAMBADA/FORBIDDEN DANCE or DEEP IMPACT/ARMAGEDDON of trash writer cinematic tell-alls. Not since the 1965 duo HARLOW bill had the world seen such a dynamically scandalous duo! 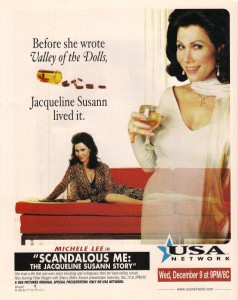 The better-known of the pair, in that it’s notable enough to still appear in DVD bargain bins all across the nation, is Andrew Bergman’s ISN’T SHE GREAT, a stripped-down big-screen adaptation of Susann’s life used primarily as a showcase for Bette Midler and Nathan Lane to spout off Paul Rudnick’s bitchy dialogue. (It’s also one of a large genre of ‘90s films called “It’s not very good, but it’s got Stockard Channing.”) It received relatively poor reviews when it was dumped to theaters in January of 2000, and it never found much of audience beyond Susann’s most strident fans. Even the video store I worked at in the Boys Town area of Chicago had a hard time renting it, and when a film about a campy celebrity with Midler, Lane, Channing and David Hyde Pierce can’t sell to the gays, you know you’ve got a dud on your hands.

Lost in the toxic cloud of Bette’s biofart, however, was a picture that had told the same story to basic cable audiences 13 months beforehand. And it’s a shame, because a biopic of a soapy, trashy figure like Susann needs to be seen in its natural habitat – the soapy, trashy world of the TV movie. Directed by Bruce McDonald, the Canadian filmmaker known for great genre pics like HIGHWAY 61, PONTYPOOL and HARD CORE LOGO, SCANDALOUS ME: THE JACQUELINE SUSANN STORY is the story as it is meant to be told, with all the grandiose qualities and over-the-top antics that you could expect from a film that’s trying to compensate for the actual sordid sex, language and violence it can’t depict.

It’s a bit odd that it comes from the USA Network, which usually relied on fictional dangers to sell their audience, but by the late ‘90s, that cash cow was beginning to have milked itself dry. The network started to experiment with biopics, producing films based on the lives of subjects as diverse as Rudy Giuliani, Hugh Hefner, Laci Peterson, Mary Kay Letourneau, Dracula and Greg Louganis between the years of 1997 and 2004. (The previously-addressed THE CHIPPENDALES MURDER also came during this era, along with a sequel to PRANCER for some weird reason.)

And, of course, there was Jacqueline Susann, and you couldn’t ask for a better subject for a bio-pic. Susann’s story has it all – a failed actress who married her publicist and went on to become a sensation in the literary world by writing tawdry tales of Hollywood decadence filled with the smut that kept the housewives across America entertained. She had a severely autistic son that was institutionalized. She was rumored to be a lesbian. She was a pill-popper. She battled – and succumbed – to cancer. There would be tears! There would be parties! There would be loud declarations of the importance of being a woman in today’s modern age!   There would be the opportunity for someone to play Ethel Merman!

SCANDALOUS ME: THE JACQUELINE SUSANN STORY has all of this.

Now, biopics are a fairly shopworn genre when it comes to format. I recently saw the trailer for a new biopic of James Brown, and it looks exactly like a James Brown biopic. It has trials and tribulations and laughter and heartbreak and you know how everything happens but the music’s really good, so you don’t really mind that you’ve seen it all before, in RAY or WALK THE LINE or COAL MINER’S DAUGHTER or CONTROL or IMMORTAL BELOVED. Sure, a few filmmakers actually break out of the mold and try to tell a familiar, well-known story in an interesting way (hi, Todd Haynes), but most biopics just go through the motions, set up a troubled-yet-talented individual and watch them battle drugs and/or philandering and/or disease and/or shady management and/or trying to find inspiration in the creative process. (Ha! I kid, nobody wants to see the last one. That’s what music montages are for, where we can watch them thinking heavily at the beginning of a song, and then embracing the energy by the time the chorus kicks in.)

No, biopics aren’t won or lost in the formatting, because the format’s all the same. They’re won or lost in the casting. We want our over-the-top celebrities to be performed in an over-the-top manner, but still retain the personality traits that made the subject so great. We don’t want out Liz Taylors to be whiny, petulant brats like Lindsay Lohan! We want them to be elegant, aloof seductresses like Sherilyn Fenn!

In the Canadian-lensed SCANDALOUS ME, the leading lady of literary luridness is played by “Knots Landing” star Michele Lee, and from the opening of the film in which her entrance is accompanied by the strands of Tom Jones’ “She’s a Lady,” she owns this bitch. Lee’s Susann is brassy, ballsy, in charge and a completely compelling figure from the first scene in which she, nearing the end of her battle with cancer, starts to look back on her life in enthusiastic narrated flashbacks to the finale when the narration switches to that of her husband Irving (Peter Riegert). It’s her show, and she “got here on guts,” as she explains.

SCANDALOUS ME hits all of the high points you’d expect from a biopic, but McDonald and Lee do an admirable job of pushing things just to the edge of camp without jumping over the line into MOMMIE DEAREST territory. It helps that Lee’s Susann’s extroverted behavior is nicely countered by Rigert’s soft-spoken Irving, who provides a sighing down-to-earth quality that works well when Lee is telling people “It’s colder than the Tin Man’s ass in here,” or expressing her disappointment at the events on November 22, 1963 with “They shot Kennedy right in the middle of my friggin’ book tour!”

But there’s certainly plenty of enjoyably jubilant sleaze to be had. We get young Susann finding out about – and covering up – her father’s affair. We get Susann trying to teach Ethel Merman how to strip, and having Merman tell her husband, “get your crazy dyke wife off of me!” We get Susann yelling “You owe me, you son of a bitch!” at God in the middle of a park. We get amazingly awkward dinner conversation. We even get VALLEY OF THE DOLLS star Barbara Parkins as Susann’s agent, who appears on the set of VALLEY OF THE DOLLS and asks, “Where is Barbara Parkins?” and is then bothered by the fact that she’s not in this scene. This is clearly a film that knows how to deliver the ridiculous goods, in the same way that Susann itself knew how to deliver hers.

The film borders on bad taste when it deals with Susann’s son’s autism, but given the time depicted, the attitudes involved are certainly not too surprising. We get Susann telling her friends that her son has “asthma” instead of admitting his autism – a disorder which emerges most visibly as he continuously hits his head on the wall to the point of bleeding while the soundtrack to VALLEY OF THE DOLLS plays in the background. We also get her recalling him touching her uncomfortably during one of their increasingly fewer meetings, with her joshing, “incestuous little bastard, isn’t he?”

Even the squickier points of the film, however, can be forgiven thanks to scenes like this, in which Susann’s editor talks to her about some of the language that she uses in “Valley of the Dolls:”

Editor: “Fags can be so bitchy!”

Susann: What’s wrong with that?

SCANDALOUS ME: THE JACQUELINE SUSANN STORY is the portrait of the “Valley of the Dolls” writer that was meant to be – it’s torrid, screwball, overwhelming, ridiculous, and bawdy, but thanks to McDonald’s knowing direction and Lee’s ability to give humanity to even the most flamboyant character, it feels like it’s very much aware of itself. McDonald could have probably even produced a better meta-biopic had he not been constrained by network standards, but this is still the biopic that a larger-than-life figure like Susann deserves.

Take that, Bette. If only this had managed to make its way onto a DVD release, maybe my old video store could have made some dough instead of having the ironically-titled ISN’T SHE GREAT taking up space.