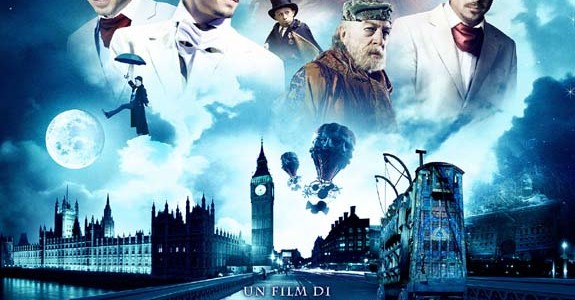 THE IMAGINARIUM OF DOCTOR PARNASSUS is playing this weekend both midnights at New York City’s IFC Center.  No, it isn’t a movie for everyone, but it most definitely is a movie for most everyone I’d want to know.  Rejoice, you scattered bunch of decent-hearted dreamers, here’s a movie with all of you in mind. 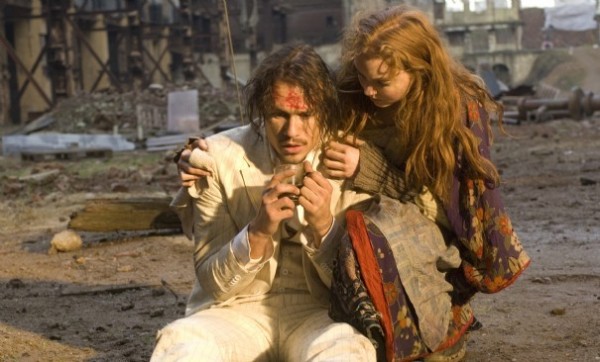 This world can be mighty unkind to men of imagination. That seems to be a running theme for Terry Gilliam, both on-screen and off. Considering the fact that the man is a founding member of the Monty Python comedy troupe and the fact that as a film director, he has made movies like BRAZIL, TIME BANDITS, and 12 MONKEYS, it shouldn’t be a struggle for him to get his new projects financed, made, and seen by an adoring public. Yet somehow, over the past decade, it has been. That’s what the press always focuses on, and frankly speaking, that’s what his movies are beginning to address, not very subtly. 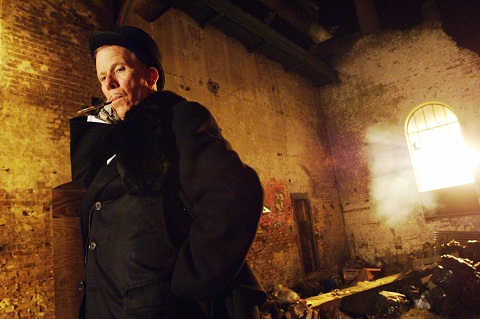 THE IMAGINARIUM OF DR. PARNASSUS is about imagination, first and foremost. This much we can expect from the title. There’s also plenty of imagination within it, which is something you can almost always expect from a Terry Gilliam film. If you go with it, it’s a bunch of fun. Personally, I loved watching it; maybe that’s just me. It’s not the most coherent movie, and there’s not much in the way of plot (and what there is, isn’t even that comprehensible.) But you go into a movie like this one to watch Terry Gilliam at work, and he’s obviously not phoning it in just yet. Quite the contrary, in fact – he attacks this movie with unconventional energy, like a missionary who wants to convert the sympathetic, and cares fuck-all about those who are unwilling to join him. 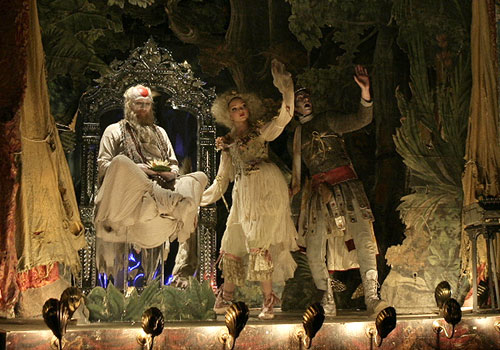 THE IMAGINARIUM OF DR. PARNASSUS plays like an inebriated dream. It has some insanely creative production design and features a diverse and brilliant cast who bring absolute conviction to the project. The headline story has always been that this was Heath Ledger’s last performance, and that after his death, Gilliam enlisted Johnny Depp, Jude Law, and Colin Farrell to round out the role. It almost works. Ledger’s character is a charismatic rogue who eventually turns out to be somewhat worse than he seems, and the replacement trio play increasingly villainous as they each appear in turn. (The reason why Ledger “turns into” Depp, Law, and Farrell is because they are literally the funhouse mirror versions – it makes a little more sense when you see the movie, although admittedly not much.) All of these guys are terrific even when the story gets away from them. 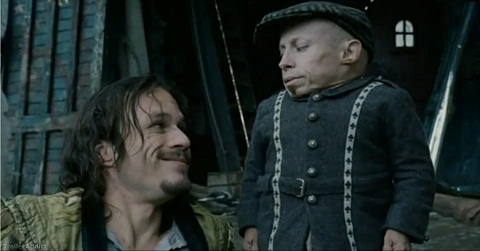 Also terrific, surprisingly, is Verne Troyer, still best known as “Mini-Me” from the AUSTIN POWERS movies. The fact that this guy is still best known as “Mini-Me” actually works as a metaphor for the general patronizing disrespect that Hollywood films and most filmgoers have always shown towards dwarf actors and little people. It’s something that I’ve always been a little uncomfortable with and something that Terry Gilliam has always rebelled against. So here he casts a dwarf as the most likable and the most reasonable character in the movie – even with Johnny Depp making an appearance, it’s Verne Troyer who makes the biggest impression. I was also impressed with Andrew Garfield, a lively young actor recently seen in everything from THE SOCIAL NETWORK to THE AMAZING SPIDER-MAN, as the male ingénue, and Lily Cole, an unusually pretty young actress and model most likely seen in very many hopeless crushes, as the female ingénue. 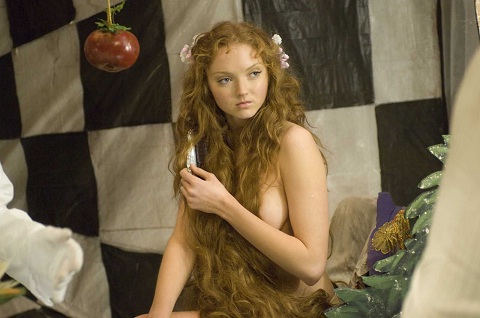 But the reason you want to see this movie are the two actors who were cast here to represent the eternal struggle between good and evil, the great Christopher Plummer as the enigmatic wandering yogi of the movie’s title, and the irreplaceable Tom Waits as his greatest adversary, who is sometimes known as The Devil. At least, I assume you want to see this. If you don’t want to see Christopher Plummer and Tom Waits in an eternal battle between good and evil, I’m not sure that we’re ever going to manage to be great friends. These two actors are unbelievably great, blessed with two of the greatest speaking voices in cinema. Christopher Plummer plays the wounded dignity and Tom Waits brings the jazzy nefariousness, and the balance between them is what makes the movie around them something special. The confrontation at the mountaintop elephant palace alone (a triumph of set design and computerized effects) is something I’d like to see again, right now. 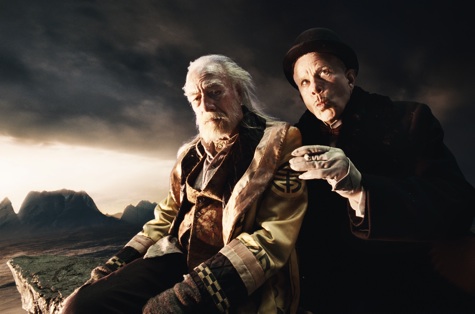 I purposely haven’t done much to describe the story, because it’s kind of hard to get a handle on. I can’t argue on the thematic consistency or airtight plotting of this film. The shooting process reportedly suffered the loss of one of its most central characters, and the somewhat slapdash effect of the finished movie seems to support those reports – however, it does seem to fit the ramshackle nature of Doctor Parnassus’s travelling sideshow in an emotionally consistent way. I was moved and entertained by this movie, even if I can’t always entirely explain why. 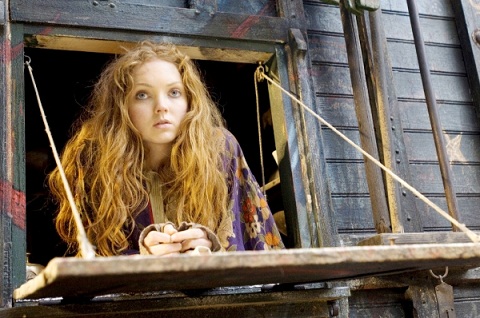 At heart, THE IMAGINARIUM OF DR. PARNASSUS is about how hard it is to be a person of imagination in advancing times. That’s an interesting theme, one that clearly resonates with the movie’s maker, and looked at in that light, this movie plays like an optimistic and good-natured, bruised and battered, modest but memorable success story. 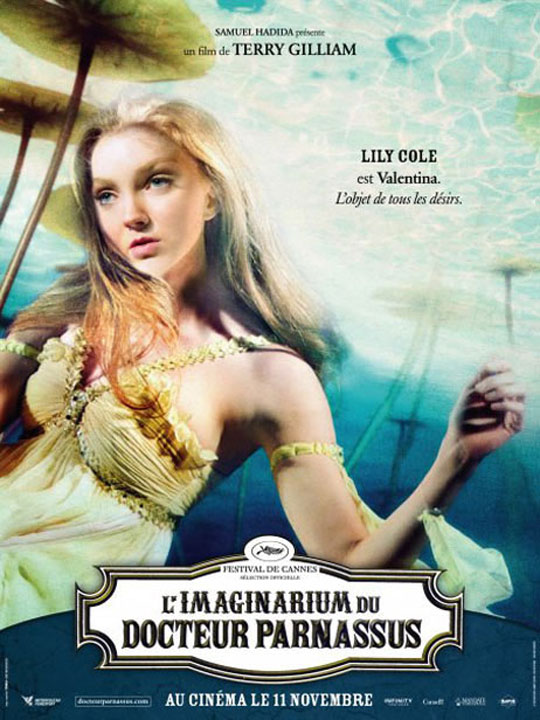