On May 5, 1993, three 8-year-old boys were reported missing in West Memphis, Arkansas. When their bodies were found a few days later, the case focused on three local teenagers as the primary suspects, who were subsequently tried and convicted.  There were, however, an astonishing number of problems with the trial, most notably that the only piece of actual “evidence” that linked the boys to the murder was a confession by one of them in which only 46 minutes of a 12-hour interrogation was released, and even that was recanted. The case of the “West Memphis Three,” as they became known, became less about finding who murdered the three boys and more about finding a villain under any circumstances, and the boys on the receiving end of the accusations, primarily then-18-year-old Damien Echols, were obvious targets due to their “outsider” status in the community and the “Satanic panic” that was prominent throughout the ’80s and early ’90s.

The story of the West Memphis Three has been chronicled pretty extensively in film, first from Joe Berlinger and Bruce Sinofsky’s series of PARADISE LOST documentaries and most recently in Amy J. Berg’s excellent WEST OF MEMPHIS, which fully chronicles the case, the research into the failures of law enforcement and the subsequent release of the three men after they’d spent nearly two decades behind bars.  With all of the fascinating aspects of the case to explore, it’s surprising that it took until this year before a fictionalized version of the events to appear – one would think that the events would make for natural source material for either a deep, probing 5-part miniseries on HBO or at least a quickie cash-in TV movie on a double-digit cable channel. 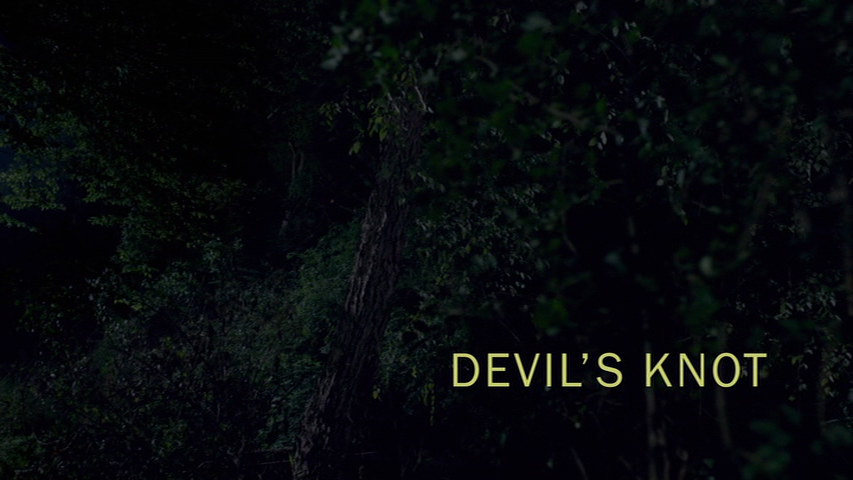 Canadian filmmaker Atom Egoyan is the one who finally took on the challenge, and the results, oddly, end up somewhere between the two most likely possibilities. The director of the great THE SWEET HEREAFTER, which shows the aftereffects of the deaths of a small town’s children to haunting mastery, Egoyan should have been a perfect fit for the material, as his ability to tackle alienation and disconnectedness should have been able to find plenty to grab on to with the West Memphis Three.

And that’s a lot of “should have,” because DEVIL’S KNOT never quite finds a reason to be. The film follows the case from right before the young boys’ disappearance to the conviction of the three accused murderers, spotlighting a number of people associated with the events. Colin Firth plays Ron Lax, a private investigator who tried to assist in the boys’ defense and is determined to help because he believes they’re innocent, despite the judge and jury that seems to have already convicted them before the trial began. The mother of one of the murdered boys, played by Reese Witherspoon, is initially convinced the law has found the right men, but becomes slowly unsure that the right thing is being done. Lastly, there are the three accused boys themselves, whose reactions vary from just wanting to please the authorities to total disdain for the situation. 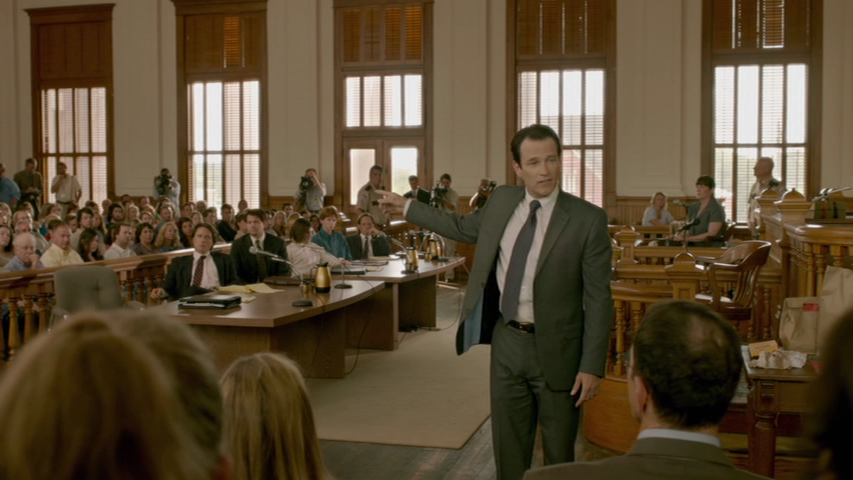 DEVIL’S KNOT probably would have benefited by a longer format, and it often seems like a 4-hour miniseries trimmed to reach feature length. There’s so much going on in the story that could serve as a jumping off point (a corrupt and inefficient judicial system, the grieving parents who confused justice with vengeance, the kids whose love for horror movies, non-Christian religion and black clothes lands them on the receiving end of a witch hunt, mass hysteria over an imagined danger overriding any sense of right and wrong) and Egoyan seems determined to touch upon all of them.

Unfortunately, “touch” is pretty much all that gets done. Egoyan and screenwriters Paul Harris Boardman and Scott (SINISTER) Derrickson are determined to make sure the audience knows exactly what’s happening in the course of the trial, and in a case as convoluted as the West Memphis Three, it’s no easy task, and it means getting a lot of titles that list dates and times that, ultimately, don’t mean a whole lot. We also follow subplots that go nowhere such as an incident at a nearby restaurant that provides another possible suspect and repeated ominous close-ups of one of the victim’s stepfathers – moments that would be effective if the film provided a whole that made them count. 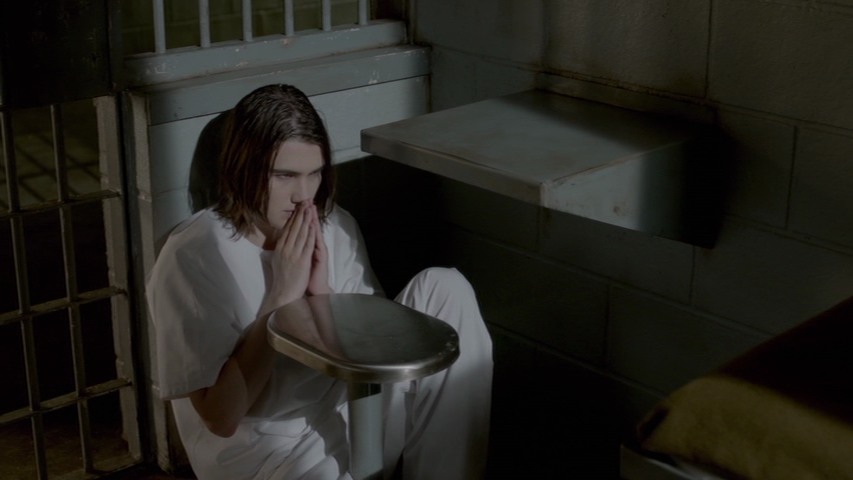 But DEVIL’S KNOT is so scattered that it never spends enough time with any character, event or feeling to make them seem important, resulting in a fairly scattershot pastiche of information, emotion, and examination of disillusionment that tries to reconcile an event so overflowing with all three that it’s just not possible to be encapsulate them into a 114-minute running time. The sad thing is that there are multiple great stories to be told (and lessons to be learned) in the tale of the West Memphis Three, but DEVIL’S KNOT seems so committed to telling them all that it falls apart when trying to tell any of them.

It’s a shame, too, as DEVIL’S KNOT features some solid performances. Firth and Witherspoon are good, the latter valiantly overcoming her miscasting as a ‘90s-era Arkansas housewife (She doesn’t have to look like the real-life Pamela Hobbs, but she often feels too “Hollywoodized” for the role to feel authentic) to deliver a few fantastic moments, like a painful segment in which she asks her son’s elementary teacher to grade her deceased boy’s homework, a scene that wouldn’t have been out of place in THE SWEET HEREAFTER. “True Blood”’s Stephen Moyer appears as a prosecuting attorney, Amy Ryan is given a relatively thankless role as Firth’s wife, Egoyan regular Elias Koteas plays a parole officer, and Bruce Greenwood lends support as David Burnett, one of the worst judges in modern history, who was thankfully promoted to being a member of the Arkansas State Senate, where he can do significantly less damage. 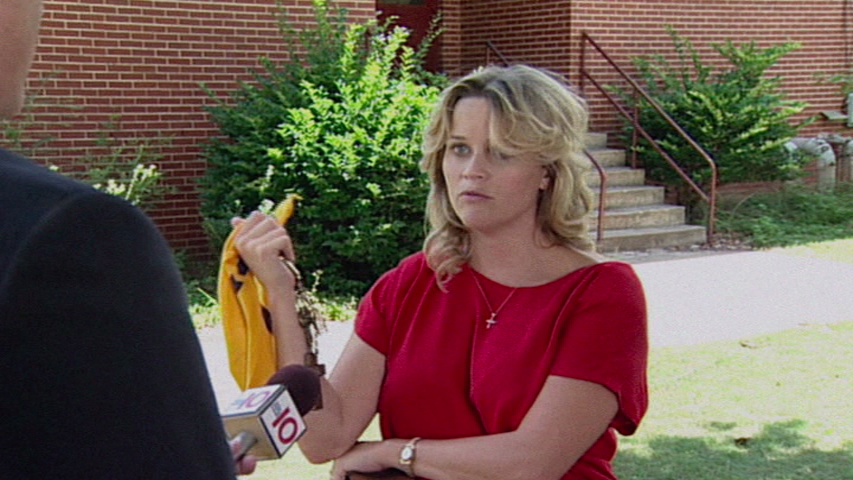 The best performances, however, come from the three boys – Kristopher Higgins as the mentally disabled Jessie Misskelley, Seth Mariwether as the soft-spoken Jason Baldwin and James Hamrick as the highly intelligent Echols are perfectly cast, both in terms of look and attitude. The moments with the three accused boys are some of the best in the film, and you honestly wish that following their story exclusively was the road the film had decided to take.

Instead, DEVIL’S KNOT never chooses a road, and ends up wandering fairly aimlessly. It’s far from a terrible film – it’s well-shot, features a scattering of impressive moments and certainly serves as a launching point for delving into the case itself – but it never quite finds a reason to exist, and that’s a genuine shame, as a case as multi-dimensional as the one it used as source material should have more than enough inspiration. (WEST OF MEMPHIS, however, is terrific, and should definitely be checked out.)