Once you know who she is, it’s difficult to not have kind of a crush on actress Lynn Lowry. The talented performer left her mark on a number of the ‘70s most notable exploitation films – George Romero’s THE CRAZIES, David Cronenberg’s SHIVERS, Radley Metzger’s SCORE and David Duston’s I DRINK YOU BLOOD among them – most often portraying an innocent, waifish young girl who ends up becoming involved in something that innocent, waifish young girls are normally kept isolated from. Her Sissy Spacek-esque looks lent a genuine sense of naiveté to the roles she played, one she had no problem subverting. She was the ultimate good girl gone “bad,” a perfect canvas for the seduction of the innocent.

That demure quality makes it no wonder how she ended up cast in SUGAR COOKIES, the 1973 sexploitation thriller (of sorts) from director Theodore Gershuny, who’d previously confused genre audiences with the bizarre KEMEK and the public domain standard SILENT NIGHT, BLOODY NIGHT. In COOKIES, a nudity-laden take on VERTIGO, Lowry gets to play both the Madonna and the Whore, as the woman whose addiction to danger ends up with her on the chopping block – and the innocent young woman who looks exactly like her and is transformed into a suitable substitute because she lacks confidence in her own personality. 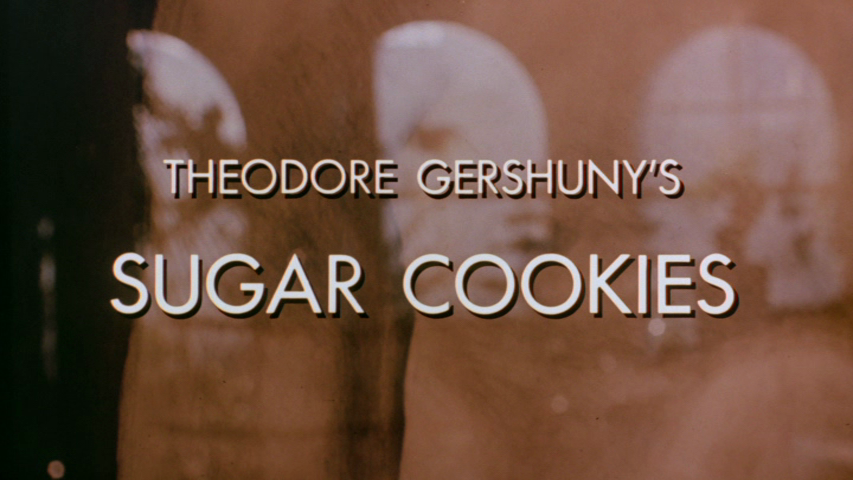 SUGAR COOKIES is the latest Blu-ray/DVD combo offering from Vinegar Syndrome, the second release from the distributor via their agreement with Troma, who issued their own sub-par DVD of the title a few years back. Troma head Lloyd Kaufman co-wrote and produced the film (along with future SEIZURE and WALL STREET: MONEY NEVER SLEEPS director Oliver Stone) and considers it “the only X-rated movie that lost money,” though that implies that COOKIES is hardcore (it isn’t) and that it hasn’t, over the four decades since its original release, at least earned back its budget. It’s no doubt that the film tanked upon first release, most likely due to an admittedly misleading title that would be more appropriate for a zany bakery-based sex farce, but SUGAR COOKIES has justly earned a fair reputation throughout the years, in part due to the performances of cult favorites Lowry and the always-welcome Mary Woronov.

COOKIES opens with adventurous adult film actress Alta (Lowry) playing some sexually gun-based games with film director Max Pavell (George Shannon, the lead in Fernando Arrabal’s bizarre I WILL WALK LIKE A CRAZY HORSE the same year) that result in her demise. Her death is ruled a suicide, a resolution questioned by Max’s friend Camila (Woronov), who concocts a plan to replace Alta and play her own lurid games. 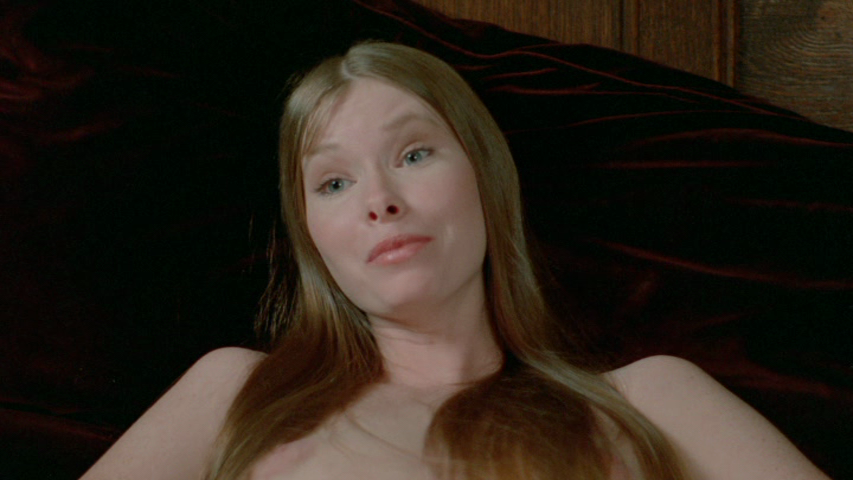 The lynchpin in these games comes in the form of fresh-off-the-bus actress Julie (Lowry), who looks exactly like Alta save for her lack of a hideous brunette wig. Telling Julie that she’ll get her a part in one of Max’s films, Camila begins grooming her for the part, adjusting her outfits, hair, and sexual orientations to match the woman she’s supposed to replace, with the occasional assistance of her gay assistant Roderick (Ondine, who, like Woronov, came from Warhol’s Factory scene). Julie is then presented to Max, who likes what he sees, and invites both her and Camila to play a little game…

The VERTIGO influence works well in the vein of an erotic thriller, and Woronov and Lowry pair well, with Woronov’s sultry seductress vamping it up in a variety of outfits as Lowry’s Julie is so fresh-faced and naïve that her wide-eyed amazement at the world around her borders on parody. Gershuny’s direction has echoes in the films of Radley Metzger in terms of some staging, not just in the use of Lowry but in Julie, whose presentation during a lunchtime scene has similarity to a similarly awkward (and oddly sexy) sequence in Metzger’s 1975 THE PUNISHMENT OF ANNE. It’s all backed by an unsettling score and good use of two original songs (written by Kaufman) and the Jaynetts’ “Sally Go ‘Round the Roses,” and if the film had stuck to the dangerous mind games of the lead characters, SUGAR COOKIES would probably be more revered today. 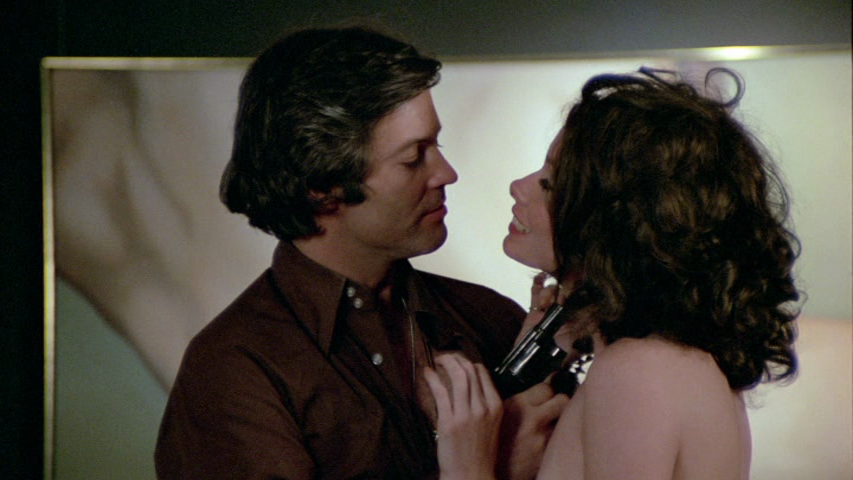 Unfortunately, it’s not – this plot accounts for a good percentage of its running time, but the film also includes a strange sub-plot involving Max’s ex-wife’s brother Gus (Daniel Sador) who calls Max “uncle” and has a crush on him that’s given comic effect in several off-kilter scenes that rank with LAST HOUSE ON THE LEFT’s zany cops as a peculiar tone-killer. Backed by the screwball country song “Big Gus, What’s the Fuss?” (the title of another Kaufman film produced the same year), the sub-plot concludes with Gus dressed in drag for a sex scene. Other than a brief connection with Max’s ex-wife (Monique Van Vooren, another Warholian), the sequences don’t really connect with the main story line at all, and it sometimes feels as though the scenes were tacked on to lighten up the film and stretch it out to feature length. (In one of the features on the disc, however, Kaufman claims it was a much larger sub-plot that was cut down.) 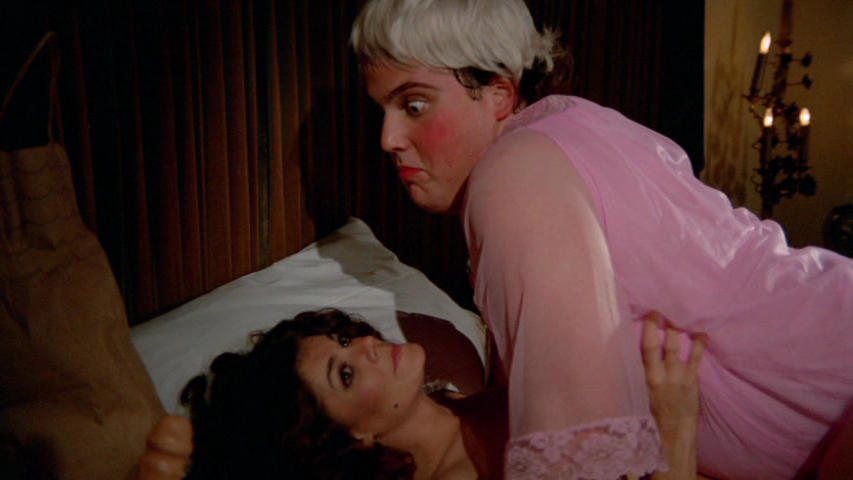 Vinegar Syndrome’s Blu-ray presents the film in a new transfer in 1080p HD, framed at 1.85:1 from a 35mm print – a huge improvement on the full-frame presentation on the previous release and one that should give the film more of a proper reputation than it currently enjoys. Three interview featurettes, including one with Lowry, a very long talk with Kaufman and a brief one in which Kaufman talks to Woronov (ported from the earlier release) are also on tap, though only Lowry’s appears on the Blu-ray disc. (The package includes both the Blu-ray and the DVD.) Lowry talks candidly about the nudity and the script, and Kaufman, as always, is fun to listen to and never attempts to censor himself, though it’s a fair bet that his verbosity should be taken with a grain of salt. Two theatrical trailers are also included.