“Lynchian” is a descriptive word often used to describe offbeat, intense films that don’t conform to traditional narrative structures, even though its use is often shorthand for “weird and inexplicable for the sake of being weird and inexplicable.”  Ivan Kavanaugh’s 2007 film TIN CAN MAN, newly released on DVD, has sported several comparisons to the ERASERHEAD director, ranging from “Lynch by way of THE TEXAS CHAINSAW MASSACRE” to “owing as much to Salvador Dali as it does to David Lynch,” so you’d be perfectly justified in questioning the overused juxtaposition and dismissing the film as being just weird for weird’s sake, a quality often seen in attempts to create a new “cult classic.”

But TIN CAN MAN’s comparisons to the work of David Lynch aren’t just whistlin’ “In Dreams.”  The journey of Peter (Patrick O’Donnell), the lead character in TIN CAN MAN, bears a similarity to those of the lead characters in the likes of BLUE VELVET or LOST HIGHWAY, as a relatively ordinary man is led into a dangerous, strange world that seems to be bubbling right beneath the surface of the reality of their lives.   It pulls the set up of an everyman becoming slowly immersed in a twisted, surreal nightmare via seduction from a very intense personality from some of Lynch’s most notorious works, but, thankfully, it features enough of its own character in order move beyond being a low-budget retread of a more polished film. 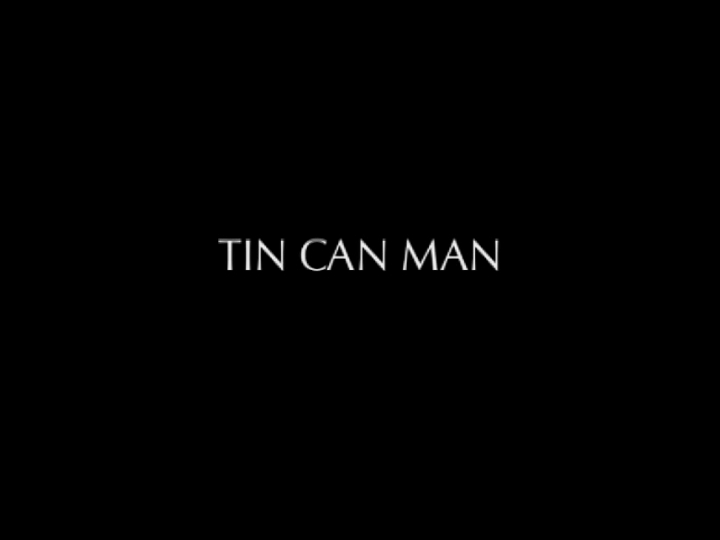 Shot in a beautifully rendered black and white that utilizes the light carefully so that background locations are often barely visible or outright nonexistent, TIN CAN MAN’s Peter begins the film with his life falling apart.  His girlfriend dumps him in a scene so awkwardly written that you wonder if the pair had been dating at all, and if his sudden proposal to her was the object of some ill-conceived friendship.  He’s given a limited amount of time to improve on his sales job, an occupation that, if the one attempt we witness is any indication, he’s completely unqualified for, making GLENGARRY GLEN ROSS’s Shelley Levine look like Don Draper.

Peter finds his life even more complicated by a knock at his apartment door by Dave (Michael Parle), a man claiming to be his neighbor.  A strange, mustached man with the gift of gab that keeps him in the apartment for much longer than would be socially acceptable, Dave turns a simple request to use Peter’s phone in order to report an accident into a series of increasingly intense questions that soon draw Peter in to Dave’s wild world for an evening that neither Peter nor the viewer will forget any time soon. 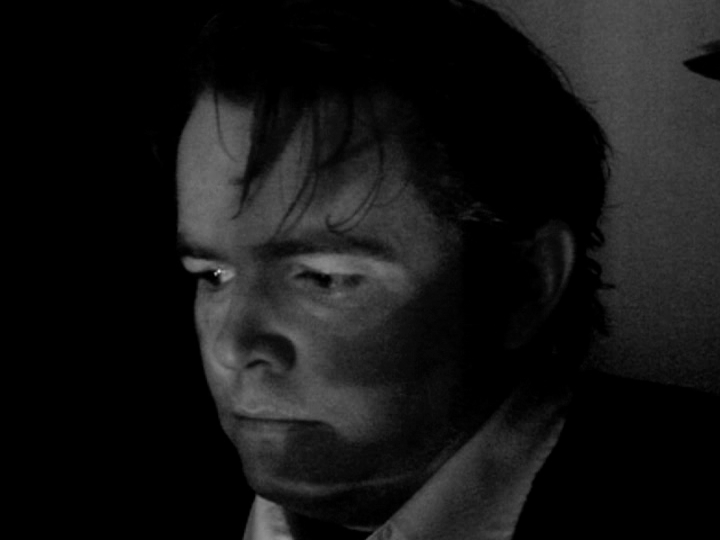 The biggest difference between Peter and the protagonists in the films of David Lynch is that while Lynch’s “heroes” are fairly pro-active, essentially initiating the rollercoaster rides they become involved in, even if accidentally, Peter is a character to whom things just happen.  A weak-willed, fairly spineless man who barely even attempts resistance to Dave’s twisted behavior, Peter is a Harry Tuttle without the inspiration to move beyond his means, a cipher who practically asks to be taken advantage of.  He’s not someone you can root for or readily identify with, and that, in the end, is the biggest flaw that TIN CAN MAN has.

The first half hour, however, sports an intensity that few films can reach, and one reliant entirely on the performances, dialogue and lighting, as Dave makes for such a frighteningly charismatic presence that you can’t help but follow along with every word, especially as Kavanaugh shoots his initial conversation with Peter in deep, claustrophobic close-up, shifting between the two wonderfully and using the crisp black and white imagery to full, creepy advantage.  Like the bastard child of LOST HIGHWAY’s Dick Laurent and TRAINSPOTTING’s Begbie, Parle steals every moment he’s in, a sinister presence that carries the film even when he’s not on screen. 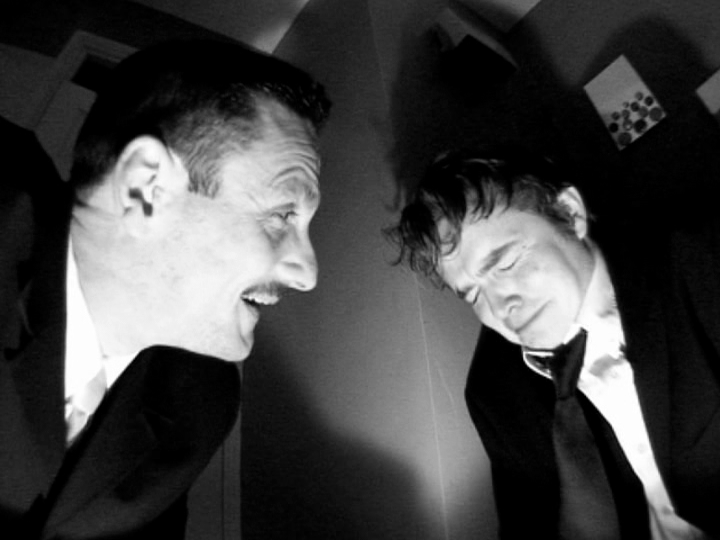 While the film never again reaches the heights of the first half hour, the rest of the running time is solid, with Peter getting dragged into a Fellini-gone-ERASERHEAD world of unsettling events that I’ll leave for you to find out about yourself.  Because despite certain reservations, TIN CAN MAN is a film that’s unique and eerie enough to be worth seeing, even if the almost comically lackluster lead character hobbles the potential emotional investment it could have had.  Kavanaugh has created a solid, low-budget mind-bender of a film that only occasionally strays into the “weird for the sake of weird” territory and should alienate just as many viewers as it draws in – exactly the effect that such a film sets out to have.

The minimalist look of the film comes across very well on Brink’s DVD release of the title, and the total blackness of the backgrounds contrasts nicely with the varying degrees of grey.  The only extras on the disc are a trailer and a “reaction” short in which audience members talk about their (positive) responses to the film.